Digital Activists Are Disappearing in Pakistan 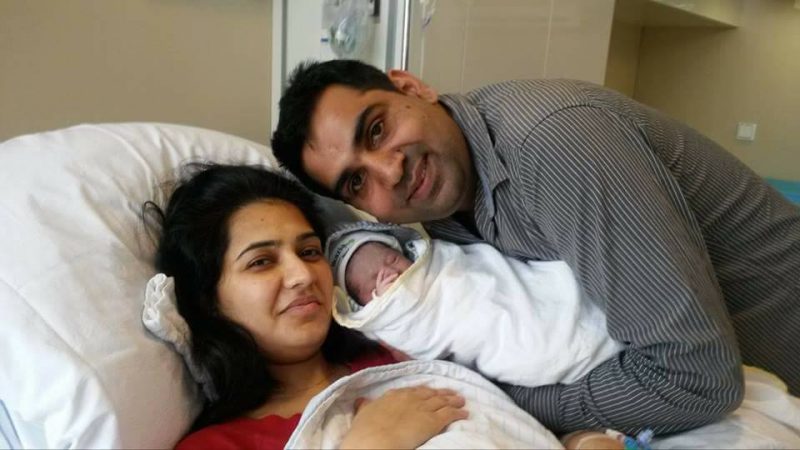 Ahmad Waqass Goraya, with his wife and son. Goraya went missing in Lahore on January 4 , 2017. Photo shared on Facebook by Mescha Saeed.

In a troubling start to the new year, reports are emerging from families and civil rights organizations that as many as nine Pakistani bloggers went missing within the first week of 2017. Four of the missing activists are known for their secular and left-leaning views.

Ahmad Waqass Goraya and Asim Saeed — both of whom were visiting Pakistan from abroad — were reportedly abducted on January 4 from the city of Lahore, according to Goraya's wife who spoke with Global Voices from the Netherlands. Goraya, a medical anthropologist and resident of Netherlands, was picked up along with his cousin Abdur Rahman Cheema.

Asim Saeed is an IT specialist who lives in Singapore. In an interview, his father told Global Voices: “Asim was carrying his two smart phones and laptop when they abducted him. These people were plain cloth [sic] and the car was new, without a registration number.”

Pakistani bloggers Ahmad Waqas Goraya, Asim Saeed and Ahmad Raza Naseer missing for 4-5 days — police have registered a case for 1 of them pic.twitter.com/aCKKunJd6C

Ahmad Waqass Goraya… my husband, my companion, my best friend and the father of my child. I know him from last 13 years, out of which I am married to him for 9 years. Never, did he stop loving me… he is a person made from sentiments and yet very strong and opinionated. He was known among his peers for strong liberal views but I saw him as a progressive man with ideas that can flourish our son. That harmless man… went MISSING in thin air on January 4th 2017.. what a start of new year for our tiny family. I had so many thoughts for this year, so much to share with him when he returned from a family trip that he was making with our son. Due to my work commitments I had to return earlier while they fully enjoyed their stay in Pakistan… the land he was mad about… the land he always wished to prosper.

What did he do worng? What was his mistake? I can't sleep, I cant stop thinking… so amny questions… what could Waqass have done wrong… a man that I married, a man so full of energy, vibrance and patriotism, a man who saw and believed that he could raise his voice and have some freedom of speech. .. was that wrong? I don't know what could have been so threatening for the people who took him away. I only want him back… asap!

We both are alone without you and we miss you papa… please come home soon to make it feel like home. And please come alive and healthy, so full of energy and passion and that brightness in your eyes. miss you and ili pili…
#RecoverAhmadWaqassGoraya

Also a known poet and social media activist, Haider's profile rose in 2014, when his poem ‘Main bhi Kafir’ (‘I am an infidel’) went viral. The poem reflected on the multiple attacks on Shia-Hazaras of Balochistan. Haider is also a theater activist, known for his critiques of the military, and writings about enforced disappearances in Balochistan.

Haider, affectionately known as Sallu Bhai, has been missing since roughly 10pm last night when his wife received an anonymous text message notifying her that Sallu Bhai’s car could be picked up from Koral Chowk, Islamabad. Since then, there has been no word of Haider’s whereabouts (…) The Tanqeed team calls on journalists, artists, activists and the literati to help us #RecoverSalmanHaider. We also hope that authorities move quickly to find Sallu Bhai and that he returns home safely and speedily.

There is a massive crackdown on sane voices and blogs. Salman Haider, Ahmad Waqass Goraya and Aasim Saeed, who were critical of the State's policies, have gone missing in the last few days along with facebook pages and twitter accounts of Bol platoon, Bhensaa, Roshni.
Something's not right…

What's going on in #Pakistan?In past 4 days, one after another, bloggers & human right activists have gone missing.

‘Killed, injured, abducted and threatened for their work’

On January 9, the Human Rights Commission of Pakistan (HRCP), a local NGO, made a statement on the disappearances:

Pakistan has never been a particularly safe country for rights activists. Many have been killed, injured, abducted and threatened for their work. Unfortunately, these actions have not always come from non-state quarters. The events of the last week demonstrate that the dangers already extend to digital spaces. We cannot be sure if the four cases are connected but expect that would be looking into as well.

Pakistan ranks 147 out of 180 in the world rankings of Reporters Without Borders’ 2016 World Press Freedom Index. “Journalists are targeted by extremist groups, Islamist organizations and Pakistan’s feared intelligence organizations,” stated the RSF. 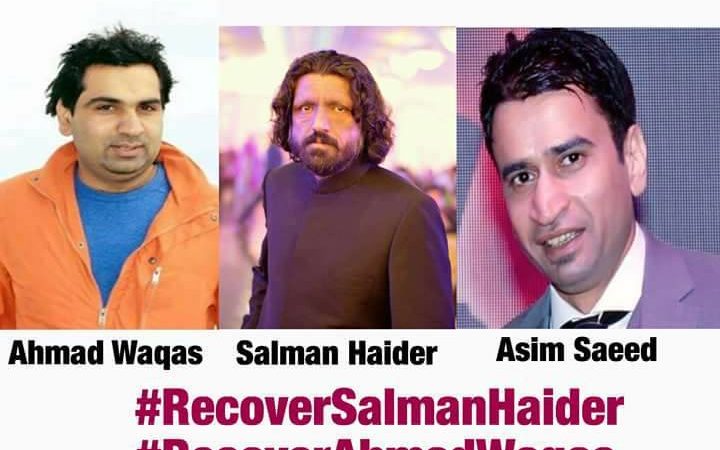 Image being shared by Pakistani activists

Despite being a serious human rights issue, the number of people who have been abducted and are missing in the country is unknown. In 2015, the country's highest court sought a report on the number of missing people. According to Amnesty International, an amendment to the 2015 Pakistan Army Act gave retrospective legal cover to arrests by the armed forces and law enforcement agencies.

In a case separate from those mentioned above, on January 1, multiple citizen journalists were arrested in the city of Multan. Reports suggest that the journalists were summoned to Federal Investigation Authority's (FIA) office and never returned. No one has yet come forth with substantive information about their whereabouts.

According to media reports, the FIA summoned the citizens because they had allegedly uploaded what authorities described as a “fake” picture of Prime Minister Nawaz Sharif with the Chief Justice Saqib Nasir on December 28, 2016, following the Prime Minister's nomination of the Chief Justice. The Attorney General of Pakistan, Ashtar Ausaf Ali,  complained about the “fake” image circulating on social media in a letter to the Ministry of Interior.

Afterward, FIA traced the identities of people who shared these pictures through their IP addresses and sent them a legal notice through WhatsApp, instructing them to appear before FIA in Islamabad on December 31, 2016.

As per one report, the number of missing bloggers has gone up to nine. 1 from Islamabad, 3 Lahore, 1 Nankana Sahib and 4 from Multan.

Urdu language daily newspaper Jang reported that the duty judge of lower court sent at least two people on a five-day judicial remand, in order to arrest others.

The Prevention of Electronic Crimes Act 2015, commonly known as Pakistan's “Cybercrime Law” has five chapters detailing offences like interference with critical infrastructure, cyber terrorism, electronic forgery/fraud, identity theft, sexual harassment, virus spreading, spamming, spoofing and prosecution formalities. While it is not clear if PECA is being used to prosecute these individuals, there is speculation that PECA Section 20 may be invoked:

20: Offences against the dignity of a natural person: Whoever intentionally or publicly exhibits or displays or transmits any information through any information system which he knows to be false and intimidates or harms the reputation or privacy of a natural person shall be punished with imprisonment for a term which may extend to three years or with fine which may extend up to 10 million rupees or both.

Many questions remain unanswered. It took almost a week to present the detainees before the court and warrants were not secured to seize their devices.

Stop the persecution of hapless citizens while banned terrorist organisations roam free and win by elections under the patronage of the government. Indians, Pakistanis, Hindus Muslims, Atheists, Shias, Sunnis, all secondary. Humans before anything else.

A petition has been circulated demanding release of the detained bloggers. Protests have been planned across Pakistan and in the UK: 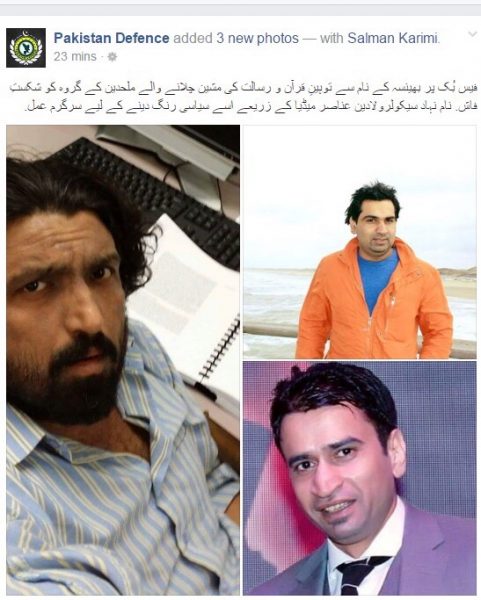 “Defeat to atheists who were running blasphemous page, Bhensa, on Facebook. So-called secular and atheist elements are active in giving this a political angle through media”

Mohammad Jibran Nasir, a Pakistani civil liberty activist, lawyer and bloggers said that this is false propaganda by Defence.pk (Pakistan Defence Page). He also shared this in a video message with his followers.

As families, civil rights groups and media organisations demand answers on the whereabouts of the missing activists, fear for their lives runs deep.

UPDATE [JANUARY 12, 2017, 16:32 EST]: The United Nations Special Rapporteur on the right to freedom of expression, David Kaye, [on January 11] called on the Pakistani authorities to make it a matter of the highest priority to locate, protect and return home four disappeared human rights and social media campaigners. Read Kaye's statement.