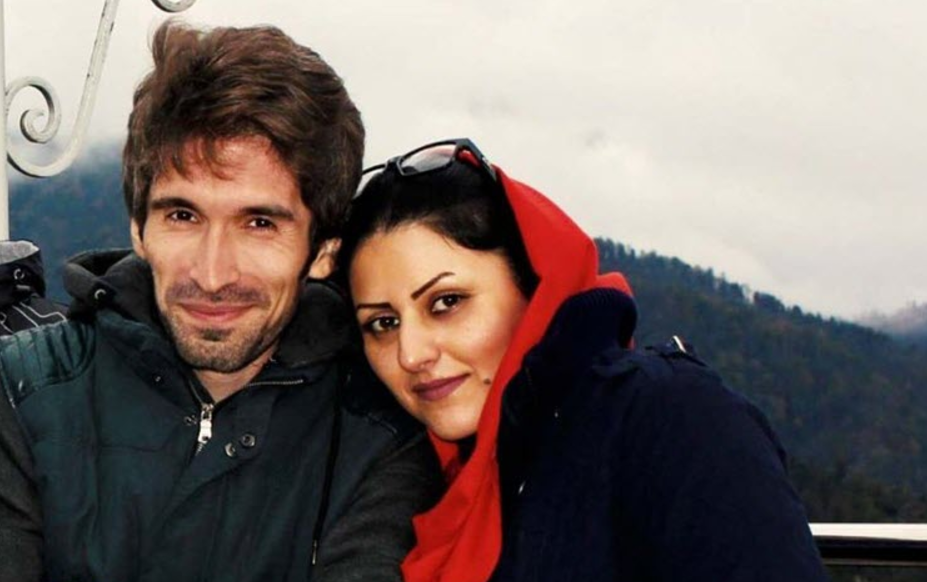 Arash Sadeghi and Golrokh Ebrahimi Iraee, together before his arrest. Photo shared widely on social media.

Iranian activist Arash Sadeghi was hospitalized on January 3, after refusing to eat for 71 days.

The human rights defender was sentenced to 15 years in prison in March 2016 on charges of “propaganda against the state,” “spreading lies in cyberspace,” and “insulting the founder of the Islamic Republic.”

Sadeghi went on hunger strike to protest the arrest of his wife, Golrokh Ebrahimi Iraee, who was arrested in October 2016 and sentenced to six years in prison for “insulting the sacred” and writing “propaganda against the state”, in several Facebook posts and a story she wrote in a notebook that was confiscated after authorities raided the couple's home last March.

Iraee informed the International Campaign for Human Rights last week that her husband was hospitalized to receive medical treatment for intestinal blockage and bleeding, among other health problems after ending his hunger strike, but was returned to prison on January 7 despite doctors’ recommendations.

The critical status of Sadeghi's health led the UN Special Rapporteur on Human Rights in Iran, Asma Jahangir, to issue a public plea to Iranian authorities to ensure proper medical attention for Sadeghi:

I call on Iranian authorities to ensure that Mr. Arash Sadeghi has access, as a matter of utmost priority, to specialized health care in a hospital outside prison, in compliance with international human rights standards and medical ethics in particular the principles of informed consent

Known as a bold tactic that political prisoners employ in order to draw greater attention to their cause, prisoners may use the hunger strike as a last resort, when they've been left with few other ways to demonstrate their position and make their voices heard. But the actual experience of refusing food for days, weeks, or (in Arash's case) months is something that is difficult to comprehend among people who have not experienced it for themselves.

The infographic below, created by Global Voices’ partner Visualizing Palestine, is intended to help readers and supporters understand the physical realities of a hunger strike, within the contemporary historical context in which most of us have come to understand this act.

As of last week, Arash Sadeghi has been added to the graphic, notably extending the record for lived experience during a hunger strike.

On January 3, the public prosecutor additionally gave notice that Iraee's furlough was overturned and she was ordered to return to jail. She has so far refused.

The campaign to save civil rights defender Arash Sadeghi has reached a critical point in which supporters believe that any amount of public attention and scrutiny on his case could have impact on Iranian authorities and help to save his life.