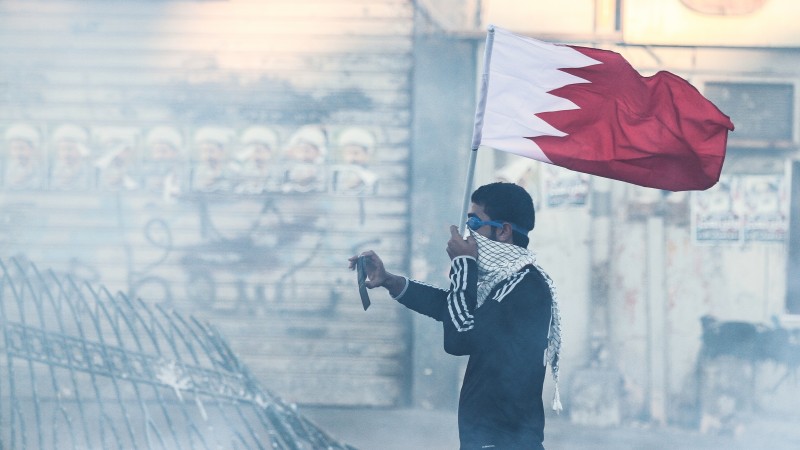 Photo from clashes in Bahrain on 5 February 2015 between police and protesters. Photograph by Sayed Hashim. Copyright: Demotix

Bahrain is intensifying its crackdown on media freedom ahead of the 14 February uprising [1] anniversary, when anti-government protesters, inspired by the uprisings in Tunisia and Egypt, took to the streets and called for political reform and equality for the country's majority Shia population.

On 16 January, the government banned [2] the online edition of the country’s only independent newspaper al-Wasat [3], from “using electronic media tools [4]“. This implies that the paper is not only banned from publishing on its website but also from having any online presence through its different social media channels. The paper has 229K followers on Twitter [5] and more than 354K on Facebook [6]. The newspaper also has a YouTube channel [7], and an Instagram account [8].

Al-Wasat co-founder Karim Al-Fakhrawi died in the custody of the National Security Agency in April 2011 after he was subjected to torture. The news daily has faced [9] similar bans in the past. In 2010 it was banned from broadcasting audio reports and interviews on its website, while last year it was forced to close its video section until August of the same year.

The Ministry of Information tweeted [4] that it has banned the daily for “repeatedly publishing and broadcasting material that causes a rift in society and a spirit of division that harms national unity and public order.” It is not clear what material the ministry is referring to, but activists speculate that the ban may have been in response to the paper’s coverage (both online [10] and offline [11]) of the 15 January execution of three men convicted of the murder of three policemen in a bombing attack in 2014.

Rights groups described [12] the men's trial as unfair, after they were forced to confess under torture [13]. As the Bahrain Center for Human Rights reports [9]:

AlWasat is the only newspaper in Bahrain that led its 16 January print edition with frontpage headlines of the 15 January execution. The AlWasat article featured photos of the executed victims, along with views of the independent local and international NGOs, and reporting on the popular reaction on the streets.

In the island kingdom of 1.2 million people, there are more than 4,000 political prisoners according to 2015 estimates [14] from human rights groups.

In another incident, the trial of Nazeeha Saeed, a correspondent for Radio Monte Carlo Doualiya and France24, began on 16 January after Bahrain's Ministry of Information filed a complaint against her for “practicing journalism without a license”. Saeed, who was subjected to torture while in police custody in 2011, applied to renew her license for the current period, but the ministry rejected her application.

Under the Bahraini Press Law [15] (Law 47/2002), correspondents of foreign media must obtain a license to be renewed every year, in order to be able to conduct their work. If they fail to do so, they face a maximum fine of 1,000 Bahraini Dinars (about 2,600 USD). Under Article 89 of the law, the Ministry has the power to revoke a foreign correspondent's license for publishing news that “involve[s] exaggeration, fabrication, deception or distortion.” Last year, the Ministry refused [16] to renew the license of several foreign correspondents including Agence France-Presse photojournalist Mohammed Al-Shaikh, Associated Press photojournalist Hasan Jamali, AP reporter Reem Khalifa, and Reuters cameraman Aamer Mohammed.

Violent clashes [17] erupted between protesters and the police, following last Sunday's execution. With just a few weeks left to the anniversary of the 14 February uprising, the situation remains intense in Bahrain. Authorities appear willing to silence any remaining independent media and critical voices they deem threatening to the ruling regime.