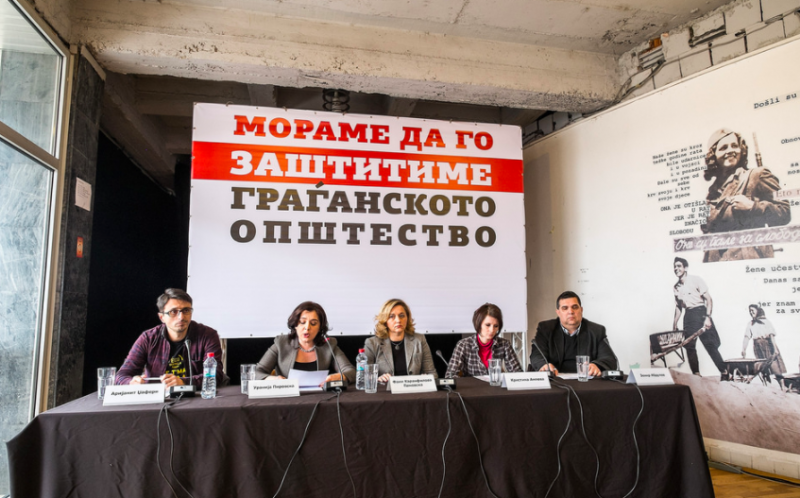 Civil society representatives hold a press conference in Skopje. The sign behind them reads, “We Must Protect Civil Society.” Photo by Vančo Džambaski via Flickr (CC BY-NC-SA 2.0)

In another recent statement, Gruevski spoke of a need for the “de-Sorosization” of Macedonian civil society and argued that rather than seeking support from foundations and governments outside of Macedonia, the country's civil sector should instead rely on the Macedonian government for financial support. This proposal would make CSOs entirely dependent on the government and undermine the basic premise of many civil society organizations, which is that they decline financial support from the government in their jurisdiction, in order to maintain accountability to the public. It is also difficult to imagine that the ruling party would provide support to any of the groups that it has routinely attacked over the last two years.

Gruevski also has alleged that 90-95% of CSOs in Macedonia are financed by liberal billionaire and foundation chair George Soros, or by foreign governments under Soros’ control. These claims are baseless and false.

Coinciding with these claims has been the appearance of a “Stop Operation Soros” campaign, now known informally as “SOS”, which promotes a message seemingly in line with Gruevski's party position on the issue.

These rhetorical threats come in the wake of special parliamentary elections that took place in December 2016 and left neither the ruling VMRO-DPMNE party nor the leading opposition party, the Social Democrats, with a majority of seats in the parliament. The special elections were held in an EU-brokered effort to re-stabilize the country, which has been in mired in political crisis since revelations of widespread illegal wiretapping by the ruling government surfaced in 2015.

While many civil society organizations are accustomed to pressure from Gruevski's VMRO-DPMNE party — the party was previously implicated for using state resources to conduct massive illegal surveillance, including wiretapping of journalists and activists — threats against CSOs have spiked since the elections in mid-December. 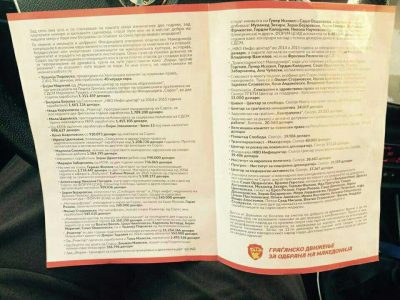 A defamatory flyer with blacklists of CSOs and activists signed by GDOM, a ruling party proxy group in Macedonia.

Flyers listing the names of dozens of civil sector activists were distributed in the mailboxes and under windshield wipers of citizens of Skopje, the nation's capital, shortly before the December elections. They included allegations about civil society advocates receiving “mercenary” money, repeating claims from defamatory articles in pro-government about some of the individuals on the blacklist. The flyers were signed by GDOM (Gragjansko dviženje za odbrana na Makedonija – Citizen Movement for Defense of Macedonia), an entity that acts as a proxy for the more radical positions advocated by VMRO-DPMNE.

Individual activists also have been regularly targeted with threats and hate speech on Twitter and other social media platforms, a phenomenon that has had increased concerns about the safety of CSO workers and their families.

Gruevski's surrogates in recent weeks has openly smeared CSO leaders, promoting unsubstantiated claims of collusion between foreign forces, Macedonia’s leading opposition party and a certain set of CSOs. Affected CSOs held a public conference stating that the allegations of wrongdoing are lies and only intended to intimidate and silence the civil society sector and independent media. They have demanded retractions and apologies for the lies.

In recent weeks, state institutions such as the Public Revenue Service have launched a series of inspections and financial audits of 21 CSOs, many of which were also targeted in the aforementioned flyers and online attacks.

The 21 CSOs subjected to inspections issued a joint public statement addressing the inspections and concurrent attacks:

[This] represents a foray against the open society, against the independent and unbowed civil voice. In other words, “SOS” and its order-givers are troubled by the free and independent associating and acting, freedom of expression and all democratic values and principles in general. Therefore, they launch untruths, manipulative data and false information in the public with one intention – silencing the civil society, discrediting and blackening its pledges and achievements.

An additional 106 organizations in the country have publicly declared their support for the group, with total of 127 CSOs signing the joint open letter.

The same 21 organizations all participated in the pre-election civil campaign “We decide”, which sought to improve public understanding of the electoral system and rules, given that a large percentage of Macedonian citizens believe that their ballots are not secret, and that political parties can find out how they've voted. A primary goal of the campaign was to encourage citizens to vote according to their own preferences, despite these fears. 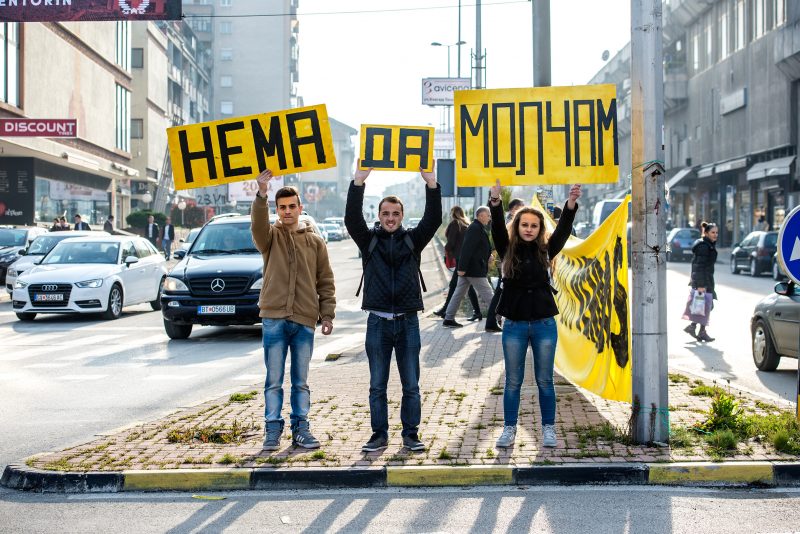 Activists holding sings reading “I won't be silent!” during a “We decide” event in Kumanovo, Macedonia, Nov 5, 2016. Photo by Vančo Džambaski, CC BY-NC-SA.

On February 4, Nova TV reported that the Organized Crime Department at the Public Prosecution Skopje had started a preliminary investigation for unlawful financing of the electoral process against several CSOs and the opposition political party Besa.

By law, all CSOs must publish their annual financial reports by April 30 every year. The targeted NGOs are in compliance with this law, and some have published external audit reports. Other registered CSOs, such as Macedonian Association of Journalists (MAN) and the Association for Spiritual Unification of Setinci, Popadinci and Krushodari that had received government grants, have not been fulfilling this obligation and have not been subject to inspections. They also are known for promoting the positions of the ruling party.

As part of the inspections, auditors asked multiple CSOs to submit five years’ worth of documentation of their funds and spending, and it has required that these documents be submitted in the Macedonian language. The majority of the funding received by these CSOs comes from entities outside of Macedonia, such as private and intergovernmental foundations in the EU, with whom contracts are typically written in English. So far, all communication with the state involving English-language contracts with foreign donors has not required providing translations, including communication for tax purposes with the Secretariat for European Affairs, and the CFCD unit of the Ministry of Finance.

The Public Revenue Service has also stipulated that CSOs will need to hire court-approved translators to translate the materials from English to Macedonian, at a rate of approximately USD $10 per page. With hundreds and in some cases thousands of contract pages needing translation, the requirement has placed substantial administrative and financial burdens on CSOs. The legal basis for the request has not been officially explained, and has left some CSOs asking for reconsideration by the State Revenue Office.

The 21 CSOs say inspectors also requested that they prepare additional information regarding financial flows in and out of the organization. Staff members were asked to complete tables detailing the names, tax/personal ID numbers, the purpose, country, amount, date, currency for each grant or revenue instance, as well as for each payment made. Completing these forms requires large amounts of manual work copying data from hundreds of invoices and contracts. The time necessary to comply with this order (months of man-hours) far surpasses the initial deadlines set by the Public Revenue Office.

All told, the inspections combined with other investigations into CSO activities and the smear campaigns have leave little doubt that these are not isolated incidents, but rather part of a coordinated effort to drain them of resources and ultimately weaken their influence on public life.

At the moment, significant resources of the targeted CSOs have been focused on dealing with these forms of pressure, with complete dedication to providing full cooperation and fulfilling the requests of the state institutions. In parallel, civil society groups around Europe — including European Digital Rights, Young European Federalists and the European Federation of Journalists — have expressed concern about the targeting of their colleagues in Macedonia.