Brazilian Facebook User Prosecuted for Posting a Joke About a Politician 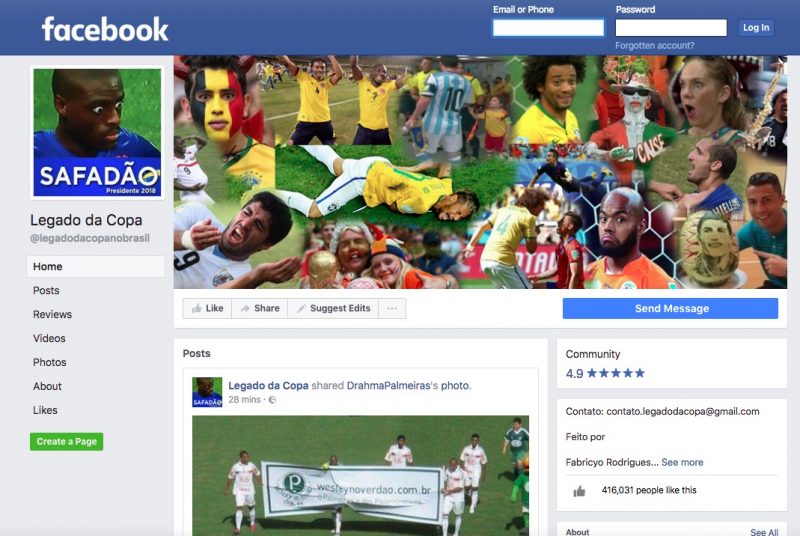 The administrator of one of Brazil's most well-known Facebook pages was fined 5000 Brazilian reais (1500 USD) for publishing a satirical post about federal legislator Celso Russomano while he was running for mayor in São Paulo in late 2016.

The administrator was prosecuted not for defamation, but rather for violating Brazil's anonymity laws.

The fake screenshot, which was reportedly created and first posted by Facebook user Cauê Madeira, was shared by the page Legado da Copa (Legacy of the World Cup) to its 400,000 followers and quickly achieved over 20,000 shares.

Russomano sued Facebook, Cauê Madeira, and Raphael Evangelista, the owner of Legado da Copa page. A court ruling from October convicted Evangelista of violating Brazil's Electoral Law, reasoning that the screenshot constituted negative publicity published anonymously. The ruling invoked Brazil's constitutional prohibition on anonymity because Evangelista's name is not visible to the public on the Legado da Copa page. Evangelista appealed, but a second ruling in March by São Paulo's Electoral Court, in a vote 4-3, upheld the ruling.

Brazil's 1988 Constitution's Article 5 enshrines the free manifestation of thought but forbids anonymity in authorship. Brazil's Electoral Law states that anonymity is also forbidden in content related to electoral campaigns. The Constitution, however, also protects the rights of journalists to cite anonymous sources.

If the user of the global network is not identified on the profile page who is responsible for the post, this is anonymity. It does not matter if one can later ascertain the identity of the poster, after judicial intervention, via the registration information or the IP used.

But the tight vote in the regional court showed how ambiguous the laws are when applied to the social media environment.

The opposite understanding, defended by the representative, would lead to the absurd conclusion that all profiles on Facebook would be hopelessly anonymous and thereafter all and any manifestation in said social network would be Constitutionally forbidden. Evidently it's not like this.

For a start, despite the supposed “appearance” of anonymity on Facebook, the specification of the user was possible in the present case because of the data made available in the occasion the user registers.

It is important to note that while Facebook allows pages to bear names that are not explicitly connected to the name of the administrator, Padin's assertion is not entirely accurate — individual Facebook account holders are required to use their legal (or in their words “authentic”) names on their accounts. 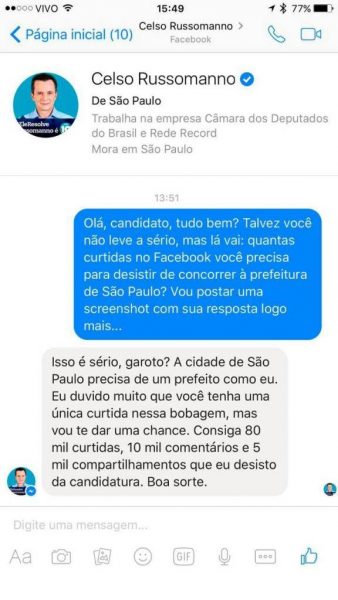 The fake screenshot between then candidate Celso Russomano and an internet user. Photo: screenshot widely shared, published under fair use.

User: Hi, candidate, how are you? Maybe you won't take it seriously, but here it goes: How many likes on Facebook do you need to resign from the race to be mayor of São Paulo? I will post a screenshot with your reply shortly…”

Impersonator of Russomano: Is this serious, boy? The city of São Paulo needs a mayor like me. I really doubt that you will have a single like on this gibberish, but I will give you a chance. Get 80k likes, 10k comments and 5k shares that I will resign from my candidacy. Good luck.

Cauê Madeira, who made the joke on the first place, was found in both decisions to be innocent as he had shared the joke originally under his own name and that didn't violate the anonymity clause. Facebook was also found to be innocent as it promptly deleted the post once a preliminary injunction was filed.

In October, Evangelista launched a crowfunding campaign to raise 7,650 reais, which covered the cost of his fine and legal fees. The campaign since has raised more than 8,000 reais.

The page Legado da Copa was founded in 2014 to satirize the legacy of 2014 Brazil World Cup and became a well-known humor page that posts mainly memes. The page's following developed a particular culture in which, in every post, no matter the subject, the commenters will always make a reference Brazil's 7-1 defeat against Germany, with them often competing with one another for the best link between the subject matter with the ill-fated defeat.

Russomano, who is a former TV presenter, was elected to Brazil's Chamber of Deputies in 2014 with Brazil's PRB, a party directly associated with Universal Church, Brazil's largest evangelical congregation that has been increasingly influential in the country's institutional politics, worrying many secular activists. His lawyer says that he filed more than 30 suits against internet websites and pages during the 2016 mayoral campaign. In the end, Russomano won 13% of the votes and lost to PSDB candidate João Dória.