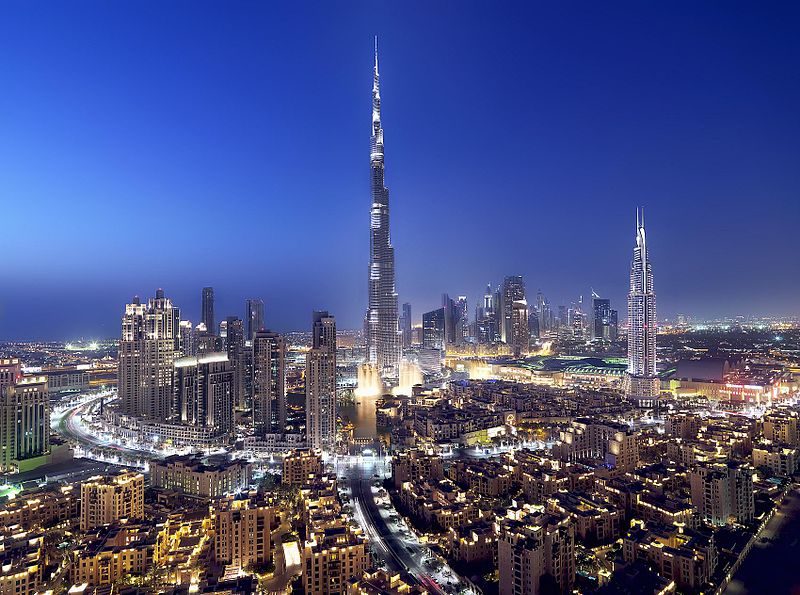 When his supporters began tweeting about the arrest [1] of Emirati human rights advocate Ahmed Mansoor [2] last week, many of them were swiftly named and shamed on Twitter for defending a “traitor that deserves to die.”

These replies came from accounts of what seem to belong to Emirati nationals, most of them with typically female usernames. Their accounts have no self-identifying photos and their Twitter walls are composed of hardline-nationalist, anti-Muslim Brotherhood, and anti-Iranian tweets and retweets, along with some religious quotes and recitations.

The online discussion about Mansoor and the people participating — on both civil society and pro-government sides — reveals a great deal about ongoing conflict between human rights defenders and hardline nationalists in the UAE.

One wrote: “Have some respect and keep quiet. A traitor and a dog like him deserves to get tortured and die…”

“Don’t bother defending traitors like him, it won’t benefit you,” said another.*

Ahmed Mansoor is a human rights defender from United Arabs Emirates (UAE) and the 2015 winner of the Martin Ennals Award for Human Rights Defenders. Following the “Arab Spring” Mansoor campaigned for democratic reforms in UAE and signed a pro-democracy petition for which he was jailed with 4 other people in what became to be known as the”UAE Five” case. After his release, Mansoor became the target of online and offline attacks [3]. On March 20 Mansoor tweeted about the illegal imprisonment of Oussama Najjar, another human rights advocate who is in police custody, despite having served out his prison sentence.

Emirati police raided Ahmed’s house at 1am on March 20 and conducted a search until the early morning hours, when they arrested him. WAM, the official Emirati news agency, quoted [4] the public prosecutor saying that they have detained Mansoor “pending further investigation.” Mansoor’s whereabouts have been unknown ever since.

Mansoor’s friends shared the news of his arrest on social media, and various online media and human rights groups reported on the incident. In the days that followed, there was an ongoing spat between supporters of Mansoor and those of the government.

Global Voices volunteers analyzed those online interactions on Twitter using Mecodify, an open source social media analysis tool. The findings, presented below, illustrate the power and influence of pro-government online commentators in shaping the narrative in their favour.

We analyzed tweets from pro-Mansoor and pro-government accounts following the arrest from March 20-23, in both English and Arabic.

Here are the most popular hashtags from both sides and the results of their reach and impact followed by an analysis for each of them: 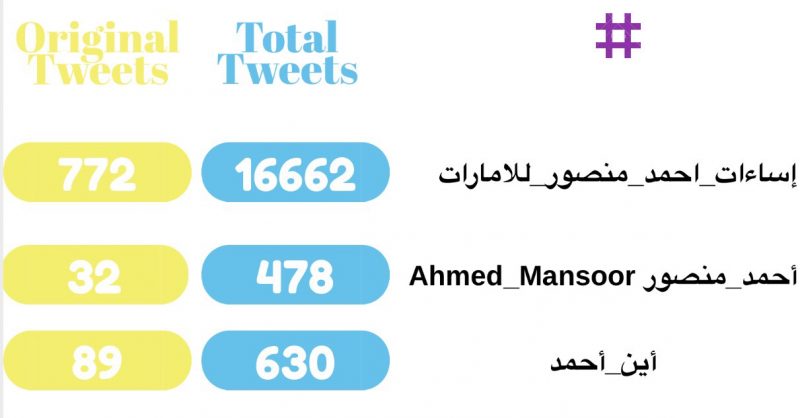 The below hashtag has been dominated by pro-government supporters and propagates the narrative that Ahmed Mansoor is a traitor because he criticizes the UAE, especially outside hi country. Some of the tweets wish death upon Mansoor. Many of the most influential tweets come from accounts that seem to belong to government employees or affiliates. The others are hardline government supporters.

One of the most influential accounts using the hashtag belongs to Dr. Ali Al Noaimi. In his Twitter bio he presents himself as an academic, a civil society activist, the editor-in-chief of Al-Ain news network, chairman of Hedayah, a UAE based counter-terrorism and violent extremism forum, and director of the Abu Dhabi board of education.

Screenshot from Twitter. Tweet reads: “While UAE prides itself with its achievements on regional and international levels, some have specialized in manacturing lies about it.”

The #Ahmed_Mansoor hashtag was used by some news outlets that wanted to seem impartial. It was also used to share the news of the arrest by human rights organizations and activists in combination with other hashtags condemning the arrest. Pro-government commentators also combined this hashtag with others to condemn Mansoor and applaud the arrest.

The #Where_is_Ahmed hashtag translates to “where is Ahmed” and is used by friends and activists asking about Ahmed's whereabouts. Some pro-government supporters used it to make fun of Ahmed and his supporters by trying to guess his whereabouts using guess work, videos and memes. 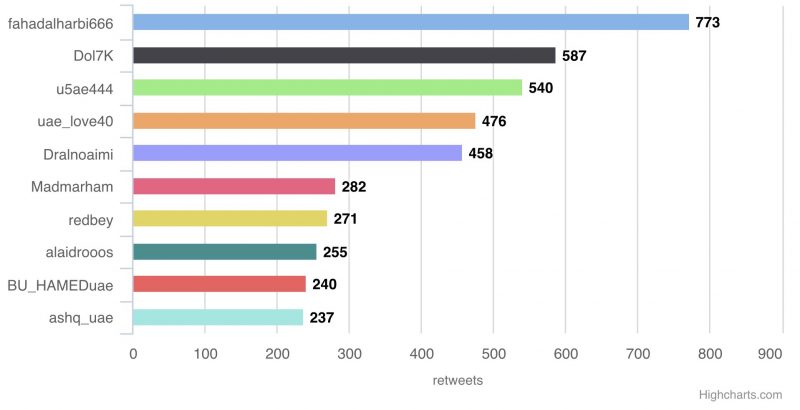 The top ten accounts that got the most retweets appear to belong to hardline nationalist Emiratis that either work as civil servants with the government or with its affiliates.

The analysis illustrates clearly who is dominating the online narrative in UAE. State and non-state actors use the technique of drowning and poisoning hashtags to bolster pro-government messages and divert attention from serious human rights issues. By dominating this discussion, they project strength and popularity of their narrative, making it easier to manufacture the consent of Emiratis and non-Emiratis alike around their views. However, it is worth noting that in the case of UAE, pro-government commentators are very active on social media and many seem to be doing it out of conviction and sheer will.

Human rights defenders in the UAE are not alone

The UAE is not unique in this regard. It is no longer unusual for governments to maintain a robust online presence — just as civil society actors do, they understand the power of the internet in forming public opinion and manipulating political discourse. The techniques used vary and include spam campaigns, fake identities and accounts joining pro-government grassroots supporters, traditional propaganda, fabricated media materials, naming and shaming, and others.

Countries in the Middle East do not fall far behind. These practices have been identified in Bahrain, Saudi Arabia [9], Egypt [10] and Syria. The Syrian Electronic Army [11] is infamous for cyber attacks against states and non-state actors opposed to the Syrian regime. They combine tactics that target activists online but they also rely heavily on offline attacks like arrests, torture, and physical harm which leads to a strong self-censorship culture for dissidents in these countries.

Often aided by western entities and vast resources, Gulf countries are attempting to shape the narrative in their favour through advanced techniques combining public and private messaging, along with technical surveillance. The independent research group Bahrain Watch compiled an extensive lis [12]t of PR firms (most of which are British) that work to enhance the government’s image, gather intelligence about activists online, and create fake personas to infiltrate activists circles. There is also evidence that the UAE is looking to build an in-house surveillance system [13] with the help of Darkmatter, a cyber security firm.

Ahmed Mansoor’s ongoing ordeal perfectly embodies this online conflict. The massive resources spent to keep an online presence coupled with offline techniques of intimidation and persecution have proven to be effective in marginalizing civil society’s presence in the digital space. This digital space is much needed amidst the shrinking of physical spaces in those countries. But it remains to be seen if MENA civil society can amplify their voices to bypass these obstacles and reclaim digital spaces.

* Editor's note: In an effort to minimize further harassment of those most affected by these Twitter campaigns, we elected to remove the names and account URLs for some of the users referenced.