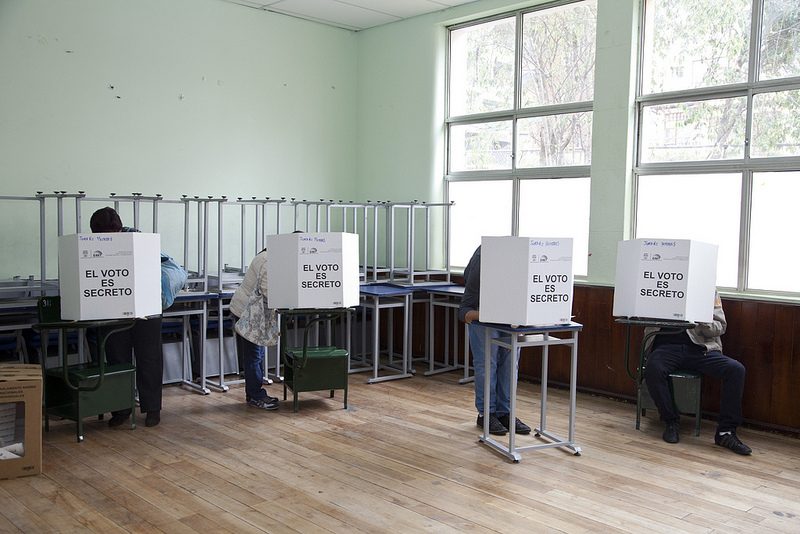 “The vote is secret.” Ecuadorians vote in presidential elections in 2013, at the Colegio Benalcázar. Photo by Fernanda LeMarie for the Cancillería del Ecuador, via Flickr (CC BY-SA 2.0)

This came as no surprise to those who have been expressing their views about the candidates online. Representatives from media rights NGOs including Fundamedios and Usuarios Digitales say their websites have suffered technical attacks over the past three months, which have typically followed the publication of election-related materials, such as guides on where and how to cast your vote and how to keep track of poll numbers as they come in. Along with pro-opposition websites, they saw a sharp decline in traffic on the evening of the election, over local ISPs.

Pressure began to rise on the afternoon of March 30, when the Twitter account of Usuarios Digitales (Digital Users), a Quito NGO that specializes in Internet access and other Internet-related policies, was suddenly put on notice by Twitter for a tweet that they published in July 2016:

Seen below, the offending tweet, published nine months before it was reported as abuse, violated neither Twitter’s rules nor Ecuador’s laws. 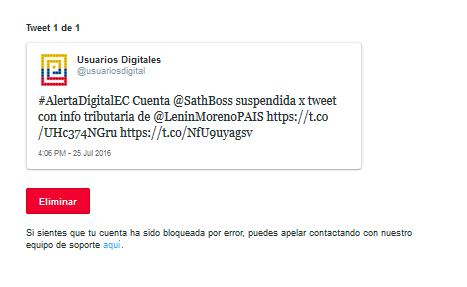 In a blogpost describing the incident, Usuarios Digitales wrote:

This situation affects the regular rhythm of our work and severely limits our ability to monitor threats against online rights.

We do our work in an effort to ensure that authorities and others in positions of power guarantee the free exercise of online rights and that the agencies involved in Internet governance have a complete understanding of the situation, in order to improve public policies in the interest of protecting human rights.

The next day, on March 31, Usuarios Digitales’ web servers underwent what they believe was a DDoS (Distributed Denial of Service) attack. This took place shortly after they published a tweet reporting that website belonging to the party of leading opposition candidate Guillermo Lasso appeared to have been knocked offline.

On April 2, researchers at Usuarios Digitales monitored technical tests showing that on local ISPs including Movistar, CNT and Netlife, there was a network-wide disruption in traffic from 18:05 to 19:20. Following the disruption, researchers saw a sudden drop in traffic to websites known for their opposing views of Alianza PAIS candidate Lenin Moreno, while the website of the National Elections Center resumed normal activity. On VPN services, Claro and TvCable, the same websites were not affected.

The website for Usuarios Digitales has had multiple brief server failures since, including one that took place on April 3, while this story was being written:

Online attacks approaching the elections have also become routine for political activists on social media. For nearly a year, Twitter users expressing criticism of Lenin Moreno, a former Vice President of Ecuador and the candidate considered as victor in the general election — despite fraud accusations — have been met with account suspensions. Although many of these have been denounced on copyright grounds, users suspect they were filed with a political motive.

For many, Lenin Moreno in the presidency will be a continuation of power for the ruling party of current President Rafael Correa. A populist leftist leader lauded by many for reforming economic policies to benefit the poor, Correa has lost popularity in recent months due to corruption allegations.

Correa also has been criticized for weakening protections for freedom of expression in Ecuador and does not hesitate to speak ill of citizens (including state employees) who fall out of his favor. Numerous journalists, activists and satirists have experienced harassment after criticizing Correa and his policies.