Armed militias have become an imminent threat for Iraqi journalists. 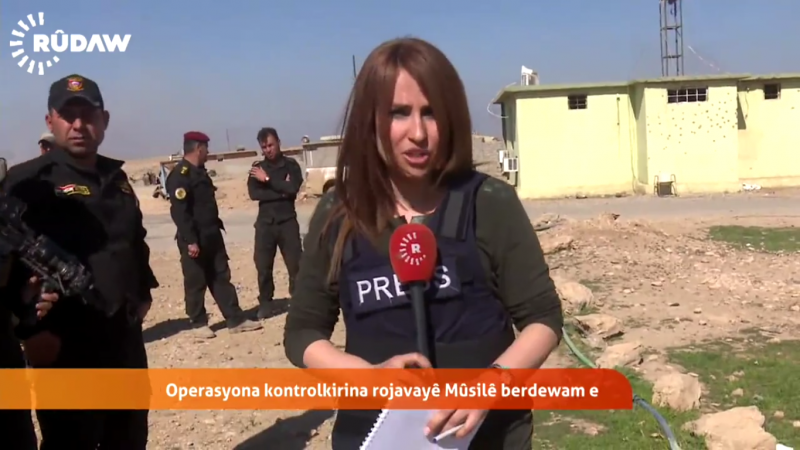 Shifa Gardi reporting from the Mosul frontline on 25 February. She was killed the same day in a bomb explosion. Photo: screenshot from a video report aired on Rudaw.

On 26 February, Shifa Gardi, a journalist and presenter with the Iraqi Kurdish TV station Rudaw, lost her life in a bomb explosion while covering Iraqi forces’ operations to reclaim Mosul from ISIS. The journalist was killed while she was interviewing the commander of a militia group near an ISIS mass grave, when a bomb believed to be planted by the militant group exploded killing Gardi, the commander and four other fighters. The explosion also injured Rudaw TV's cameraman Younis Mustafa. Mustafa was released from hospital, tweeted Rudaw on 20 March, and he is recovering.

Gardi's story is not unique in Iraq, and rights groups are concerned that she may not be the last one to lose her life while doing her job as a journalist in a country where at least 178 journalists were killed since 1992, according to the Committee to Protect Journalists. The Journalistic Freedoms Observatory (JFO), a non-profit organization promoting press freedom in the country puts the number of journalists, media support workers and technicians killed since 2003 at 299. The discrepancy between these numbers reflects different methodologies — CPJ only counts confirmed cases of journalists killed in direct reprisal for their work, or those killed while covering clashes and conflicts. The JFO, on the other hand, appears to include numbers of unconfirmed cases.

As the conflict continues in Iraq, so do the threats against journalists and media workers. Because of its brutal tactics, ISIS has so far received extensive coverage for its violations committed against media and press freedoms. However, journalists in Iraq also face threats from armed militia groups and government authorities.

After ISIS took over Mosul in June 2014, the city “turned into a death trap for journalists,” the JFO and Reporters Without Borders said in a report shedding light on media and press freedom violations committed by the extremist and violent group.

Between June 2014 and the date of the release of an updated version of the report earlier this year, the organizations documented the kidnapping of 48 journalists, media workers and journalism students by ISIS in Mosul. Thirteen of those kidnapped were executed, while 25 were released thanks to clan and tribal mediation, but only after they were subjected to torture and pledged not to practice journalism anymore. The fate of ten others remains unknown.

ISIS snipers have been responsible for killing journalists while they were on the frontline covering the Iraqi army's battle against the group. On 22 October 2016, Ali Risan a cameraman for Al-Sumaria TV channel was killed while covering clashes between Iraqi forces and ISIS, when a sniper hit him with a bullet in the chest. Just a day earlier, another journalist, Ahmet Haceroğlu of Türkmeneli TV, was killed while covering clashes between Kurdish forces and ISIS militants in the city of Kirkuk. According to the journalist's news outlet and police, Haceroğlu was hit in the chest by an ISIS sniper. 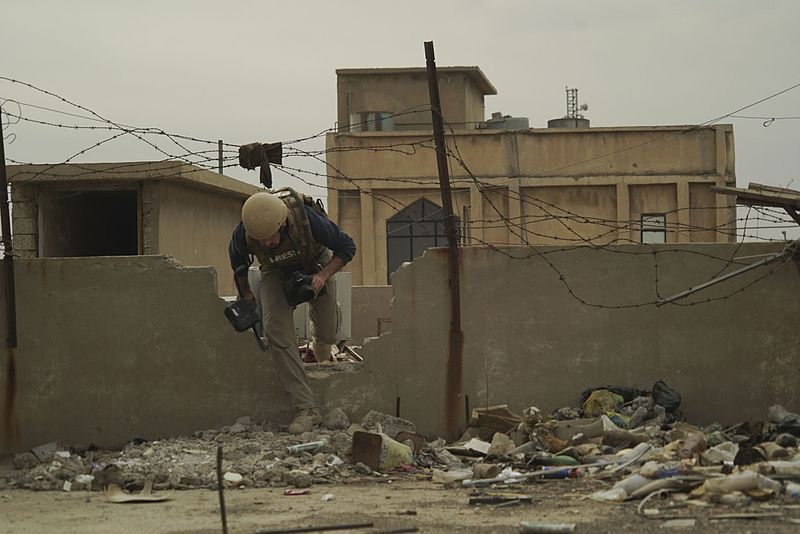 A reporter in Mosul, Iraq in November 2016. Photo by Mstyslav Chernov via Wikimedia Commons (CC BY-SA 4.0)

“During the last three years we have lost many journalists: some were executed by Daesh [Arabic language acronym for ISIS] in the regions occupied by the terrorist group, and many others were killed while covering the clashes”, said Bahar Jasim a freelance Iraqi journalist and blogger previously based in Iraq. Jasim left the country in 2014 due to fears over threats in relation to his work.

Jasim is hoping that an end to the war with ISIS would “at least mean an end to the murder of journalists by the group” and that journalists “would not have to cover the clashes and put their lives at risk”. Although in the past few weeks, Iraqi forces have been making progress in the battle against ISIS, it remains unclear when the conflict will end, and to what extent the terrorist threat in Iraq will diminish. Most importantly, however, the threats, journalists and reporters face in Iraq, will not come to an end with the defeat of ISIS, as they are also at the mercy of armed militia groups.

The threat of militias

Renad Mansour, a researcher on Iraq previously affiliated with the Beirut-based Carnegie Middle East Center, estimates the number of armed militias in Iraq between 60 and 70, comprising about 90,000 to 100,000 fighters. Government figures estimate the number of militia fighters at 140,000. Some of these militias are affiliated with political parties such as the Badr Organization, which has members elected to the parliament. Others have close ties to the government. The history of Iraq's militias dates back to the era of Saddam Hussein, where some were formed to counter his rule. Others like the prominent Sarayat al-Salaam (formerly the Mahdi Army) were formed with the purpose of opposing the 2003 US invasion of Iraq.

Whether these militias are linked to the government or not, the impact on the work of journalists is the same, Jasim says: “the top of the pyramid in these militias and armed groups should not be touched.”

Militias “pose a threat to the lives of journalists and they narrow the space for freedom of expression in the country,” said Mustafa Saadoon, an Iraqi journalist and director of the Iraqi Observatory for Human Rights, in an email interview with Global Voices. He continued:

You find Iraqi journalists trying their best not to address anything that could harm the interests of those armed groups or powerful people who were complacent in abusing any journalist covering them to reveal their [involvement] in corruption or human rights violations.

Today, these militias are considered “key to the fight” against ISIS, the fundamentalist militant group which in 2014 captured parts of Syrian and Iraqi territories including the city of Mosul. Yet they themselves have been accused of committing human rights violations, amounting to what Human Rights Watch described as “possible war crimes.” To take just one example, in 2016, members of two Shia armed groups abducted and killed “scores” of Sunni residents in a town in central Iraq, and demolished and looted civilian properties.

“As the war intensifies, and the number of armed groups and their influence in Iraq grows, the pressure on Iraqi journalists will increase,” Saadoon told Global Voices. “With more of these groups, there will be more rights violations and illegal practices from their part.”

As the conflict and violations continue, these armed militias will increasingly seek to silence any critics, including those journalists exposing their abusive practices and rights violations.

Afrah Shawqi is one journalist who came under target from armed groups. On 26 December, eight armed men in civilian clothes claiming to be members of the security forces kidnapped Shawqi from her home, and released her nine days later after. While she was in their custody, they interrogated her about her work as a journalist and her online publications. A day before her kidnapping, Shawqi published online an article critical of armed groups and the impunity with which they operate. She was also interrogated about a fake (i.e. fabricated) news article published on the Saudi newspaper Al-Sharq Al-Awsat, about a surge in pregnancies outside marriage coinciding with a religious Shia event in the Iraqi city of Karbala. The fake news report may have just been a pretext to target Shawqi, as she stopped working for Al-Sharq Al-Awsat several months before its publication in November last year.

In July if not earlier, Shawqi was said to be on a militia “black list” of hostile journalists & received threats: https://t.co/t4eqfNTBsz

Some say Shawqi kidnapped because of recent article on police abuse. But might be b/c of her past work with al-Sharq al-Awsat newspaper

No evidence that Shawqi had anything to do with that bogus a-Sharq al-Awsat article, but could still be an excuse for militias to kidnap her

Impunity and lack of government action

Afrah Shawqi was unable to identify her kidnappers but said that they seemed to be “an unorganized armed group,” and despite the Iraqi government making pledges to hold those who kidnapped her to account, it appears unlikely that they will face justice. Impunity for crimes against journalists in Iraq is very high, with the country topping CPJ's list of journalists killed with complete impunity, with 110 unresolved cases since 1992.

The number of impunity cases is a concern for journalists and rights groups. Saadoon says the Iraqi government and the country's judicial institutions are not taking a stand in support of journalists who have been subjected to violations. 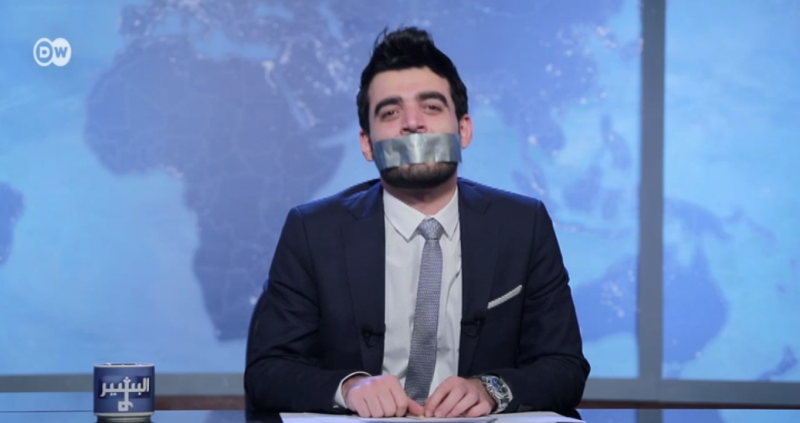 Ahmed Albasheer, presenter of the satirical talk show Albasheer Show, mocks a decision by the Iraqi Communication and Media Commission to suspend his program on Alsumaria TV. The program currently airs on DW Arabia and the Kurdistan based NRT Arabia.

Iraqi authorities are not only accused of failing to bring to justice those responsible for murdering or abusing journalists — they are also blamed of perpetrating their own attacks against the media. The JFO has documented several cases of security officers assaulting journalists. On 2 January, police violently dispersed journalists protesting in support of Afrah Shawqi while she was still held captive by her kidnappers. The police fired live bullets in the air and beat several journalists in the incident. In another case, on 14 February, a police officer in the city of Karbala pointed his gun at NRT TV journalist Haidar Hadi, insulted him, threatened him with murder, and prevented him from entering the local governor's building to cover a visit by the German ambassador.

The concerned government authorities “are not performing their proper duties” to ensure protection of media and freedoms, Jasim told Global Voices. He mentions as an example the Communication and Media Commission, established in 2003 by order of the Coalition Provisional Authority as an “independent and non-profit making administrative institution” to regulate the telecommunication and media industries in the country in accordance with Article 19 of the International Covenant on Civil and Political Rights, which guarantees the right to freedom of expression. The commission, however, is rather “very active in going after TV programs,” says Jasim. In April 2016, it ordered the suspension of the news satire and talk show Albasheer show on Alsumaria TV for violating professional guidelines and for “its low language, and offensive suggestions to the public taste.”

Over the past few days, Iraqi forces have been making advances to take back control of Mosul, ISIS's last stronghold in the country. If they succeed in driving ISIS out of Iraq, journalists may breathe a sigh of relief. But the pressures and threats they face are not going to end anytime soon. On one hand they will still remain at risk of violations by armed militias that do not tolerate criticism or independent reporting on violence. On the other hand, they have to deal with abuses by security officers and the lack of government action to bring to justice those responsible for violating media and press freedoms.