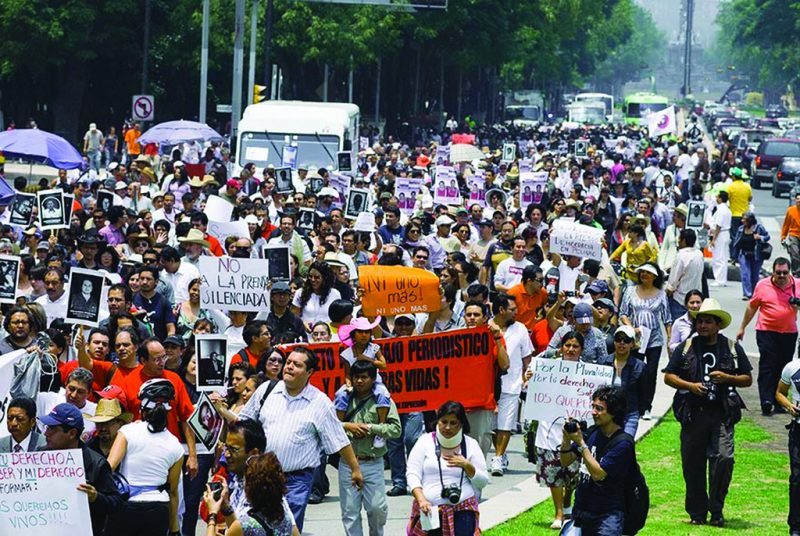 Hundreds of Mexican journalists silently marched in downtown Mexico City in protest of the kidnappings, murder and violence against their peers throughout the country in 2010. Photo by Knight Foundation via Flickr (CC BY-SA 2.0)

Four journalists have been killed in Mexico since March 2, 2017. Although their killers’ motives have not been confirmed in each case, all four journalists reported on corruption and organized crime. All but one are known to have received violent threats both on and offline in response to their work.

Among them was veteran journalist and crime blogger Maximino Rodríguez who was shot and killed as he and his wife were entering a parking lot. Rodríguez, 74, had recently written critically about the activities of a local criminal gang and had received a death threat from a reader just days before his murder.

Rodríguez covered the civil wars in Honduras and El Salvador in the 1980s and had worked with various media organizations in Mexico. In semi-retirement, he was an active contributor to Colectivo Pericú, a blog based in the state of Baja California Sur, where readers can contribute anonymous tips about crime and corruption in the area. This approach to crime reporting has become increasingly common in Mexico, particularly in northern states, where violence against journalists and media offices has become routine.

On March 2, freelance journalist Cecilio Pineda Birto was shot ten times at a car wash after having received numerous death threats in response to his crime-related reporting on his public Facebook page, where he had more than 31,000 followers. Pineda also wrote regularly for the national dailies El Universal and La Jornada de Guerrero.

Veteran crime journalist Miroslava Breach Velducea was killed on March 23 in the state of Chihuahua, where she had worked for multiple major print outlets including La Jornada and El Norte, a leading newspaper in northern Mexico that closed its doors shortly after her death in what the editor-in-chief described as an “act of protest” in the face of the rising risks encountered by their reporters.

Ricardo Monlui Cabrera, who covered politics and the local sugar industry for nearly 30 years, was killed on March 19 in the northeastern state of Veracruz. He had served as editor-in-chief of El Político and was the president of the local journalists’ association. The motive in his killing is unconfirmed.

Documentation from the Committee to Protect Journalists indicates that Mexico is the only country in the world where any journalist has been killed in direct retaliation for their work in 2017. In March, the media freedom organization Article19 Mexico released their 2016 report in which they documented 426 incidents of journalist repression, including physical attacks, legal threats and attacks via digital means.

With demonstrators boycotting recent elections and public violence increasing in the northern Indian state of Jammu and Kashmir,  mobile 3G and 4G connections were cut on April 17. Political party leaders now are urging the state’s chief minister to ban Facebook and WhatsApp in the coming days, in an effort to slow the spread of gratuitous images of violent acts in the region, including one viral video of a Kashmiri protester who Indian military officers tied to a military jeep as a “human shield”. This would be only the latest in a series of short and medium-term cuts to web sites and communication services in recent months.

A Japanese artist was ordered to pay a fine on obscenity charges after she distributed 3D scans of her vagina as part of an effort to raise funds for her art work. The artist has made and presented multiple sculptures of vaginas, none of which have been cause for legal concern. “I’ve always believed that I’m innocent. But the 3-D data is guilty and Decoman (plaster artwork) is not,” Megumi Igarashi told reporters after the verdict was announced.

Ugandan academic faces criminal prosecution over ‘a pair of buttocks’

Ugandan academic and feminist Dr. Stella Nyanzi was charged with engaging in “cyber harassment” and “offensive communication” for posts on Facebook that compared President Yoweri Museveni to “a pair of buttocks”. With 141,000 followers on Facebook, Nyanzi is a leading voice on issues of sexuality and women’s health in Uganda, and has helped drive a nationwide campaign to raise money for sanitary pads for schoolgirls. A few days prior to her arrest, she was interrogated by police concerning her fundraising efforts. She will remain in detention until her next hearing on April 25.

A Russian math instructor is facing charges of making “public calls for terrorist activity” after Russian police traced incendiary online messages to his IP address. Dmitry Bogatov says he didn’t write the messages, and there is ample evidence suggesting that their actual author was associated with Bogatov’s IP address either because he used Tor (Bogatov ran a Tor exit node) or an IP spoofing technique of some kind. The judge who heard his case on April 10 upheld the charges despite flimsy evidence and a strong alibi, and ordered Bogatov be held until his trial on June 8.

On April 14, Telegram voice calls were officially deployed in Iran, however within 24 hours users were reporting calls were blocked. On April 17, Iran’s prosecutor general officially announced the service had been blocked through a judicial order. According to Telegram founder and CEO Pavel Durov, and various mobile operators inside Iran, Telegram voice services are being blocked at the international gateway operated by the Telecommunications Infrastructure Company of Iran.

Critics of the social conservative Russian politician Vitaly Milonov are trying to get him kicked off the social network Vkontakte for using the phrase “Ορθοδοξία ή θάνατος!” (“Orthodoxy or death!” in Greek), which was judged to be “extremist speech” by a Russian court several years ago. Milonov, a devout religious conservative considered to be the main architect of St. Petersburg’s ban on “gay propaganda”, has a history of using the phrase in his political campaigns.

Civil liberties advocates in the US are urging US Homeland Security Secretary John Kelly to reject any legislation that would require “visa applicants, refugees, or other foreign visitors to provide passwords for online accounts… in order to enter the United States,” asserting that such a requirement violates local and international laws protecting privacy, and that it “would chill the speech and behavior of people around the world.”

A new documentary titled “The Moderators” explores the work lives of content moderators who remove explicit photos on social networks and websites, manually filtering out violent, pornographic and other types of content that would offend most users. The documentary says that there are approximately 150,000 workers responsible for content moderation worldwide, with the largest proportion of them living in India. Note: This film contains graphic images.