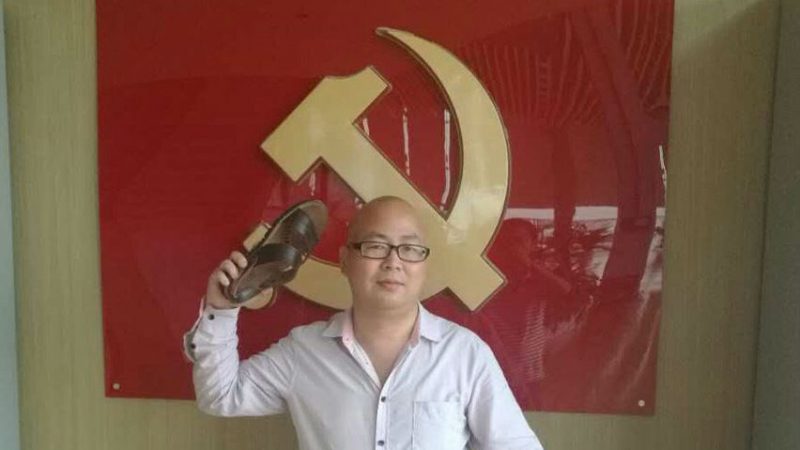 Wu Bin uploaded this photo to Twitter on April 26.

@xiucai1911 just called and said that Shenzhen national security police and public security police were outside his apartment and they were about to arrest him. The reason was related to his online speech. Please pay attention to Xiucai Wu Bin.

There were about seven to eight police officers. The team leader was in plain clothes and I guess he is a national security police. They said as the kids would return home soon from school, it was better not to have the conversation at home. I said it was okay to have one police officer talking inside the apartment. They refused. In the end, Xuicai agreed to go to Buji police station. Since they did not provide any written document for the summons, I bid him not to go with them. But Xiucai opened the door and followed the police. After he left, his phone line did not work. The phone number of Buji police station is 0755-28872922, please make the call and ask what happened.

Huang went to the police station the next day to obtain her husband's summons record. She believes that his detention will last for at least a few days.

Wu Bin has been a target for “stability control” and has been subjected to police harassment on multiple occasions in recent years. In September 2013, he was detained for 10 days by Hanzhou police for “picking quarrels” online. In May 2014, he was illegally detained along with several other dissidents before the anniversary of 1989 Tiananmen Pro-democracy Protest.

On 14 November 2015, Wu Bin was arrested by a national and public security policy in Shenzhen after participating in a public gathering concerning the “unnatural death” of Guangzhou citizen Zhang Liumao while he was in police detention. On 13 December of the same year, Wu Bin was taken away by Shenzhen police who said that they had arranged for him to travel out of town for a few days.

On 16 September 2016, Wu Bin was summoned by police accusing him of spreading rumors about protests in Wukan village. His wife was also detained at the time, for forwarding news about the same Wukan protests. She has since filed a lawsuit against the Long Gang Police Station in Shenzhen for her 10-day illegal detention. Hearings in the law suit begin today, 28 April.

Wukan, a fishing village in Guangdong, has been in dispute over land seizure since 2011 and several mass demonstrations have taken place. Villagers began marching in protest daily since mid-June 2016 after the arrest of protest leader Lin Zulian (formerly known as Lin Zuluan), an elected leader of the village.

It remains unknown what exactly triggered Wu Bin’s arrest. But on 26 April he mentioned that his friend Wang Yingguo was detained for several hours after they met a friend coming from the U.S. He also posted a comment on Twitter about his wife’s court case against the police on 28 April.

Under these “stability control” measures, it is increasingly common for netizens who are critical of the government to be summoned or detained by police. Many of the arrests and detentions are unreported and in most cases, netizens keep silent and stop making online comments. Wu Bin and his wife are in the minority who continue to raise their voices despite the risks.