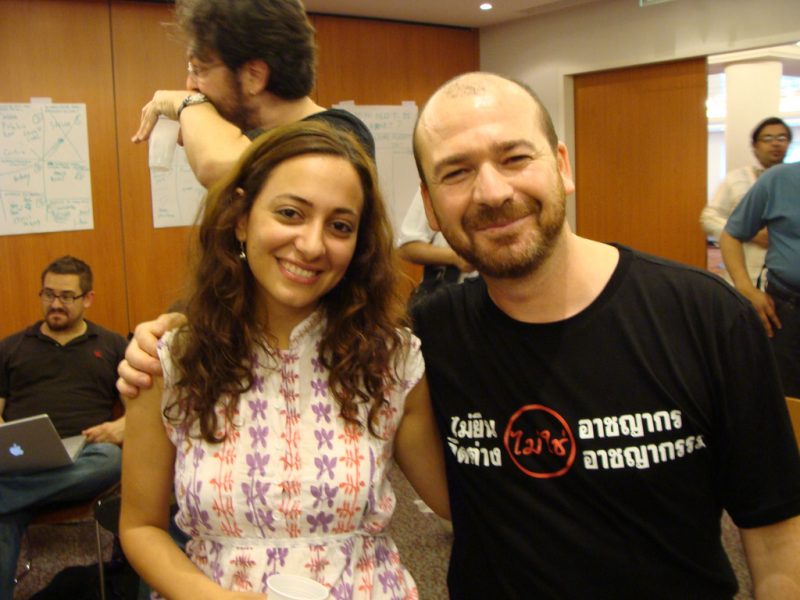 Sami Ben Gharbia (right) with Syrian activist Razan Ghazzawi at a Global Voices meeting in 2008. Photo by Yazan Badran via Flickr (CC BY 2.0)

Tunisian media and human rights activist Sami Ben Gharbia was interrogated for six hours on May 3 by Tunisian authorities who asked him about his role in the release of the presidency's action plan on a controversial economic reconciliation draft law.

Upon his arrival at the Central Investigation Brigade of the National Guard in L’Aouina, Ben Gharbia was primarily questioned about the source of the Presidency of the Republic’s leaked action plan lobbying in the law's favor. He was also questioned extensively about the inner workings of Nawaat, the Tunisian independent media and transparency NGO that he co-founded in 2004. In their description of the incident, Nawaat staff wrote:

Faced with Ben Gharbia’s determination to protect our sources as per article 11 of Decree-Law 115, the interrogation lasted 6 hours and gave way to harassment, focusing on Nawaat’s internal functioning, the identity of its journalists (identity cards, telephone numbers, etc.) and the list of Nawaat’s collaborators, with the intention of interrogating them one by one.

Ben Gharbia is a significant figure in independent media and digital human rights activism in Tunisia and the Arab region. In addition to co-founding Nawaat,  He also was the founding director of Global Voices’ Advocacy project, now known as Advox.

Human rights organizations in the region and around the world have condemned the government's actions towards Ben Gharbia:

The so-called “economic reconciliation” law has triggered criticism, as it would grant amnesty to business people and officials accused of corruption during the regime of former dictator Zine el-Abidine Ben Ali, provided that they return any unlawfully obtained funds. Sponsored by the government and President Beji Caid Essebsi, the bill's adoption has been delayed for two years due to opposition from civil society and protesters. However the bill is now scheduled for plenary debate on 9 May, and has thus sparked protests across the country.

Critics including the anti corruption NGO I-Watch, the transparency group AlBawsala and the Truth and Dignity Commission, established after the revolution to investigate crimes committed during the dictatorship era, argue that the bill's adoption would undermine the country's transitional justice process and enable further corruption by strengthening a culture of impunity. Activists opposing the bill want to see those involved in corruption brought to justice and sentenced by courts, before any sort of amnesty takes place.

Since it was first proposed by President Essebsi back in 2015, Nawaat has provided extensive coverage on the bill, including multimedia coverage of protests opposing the law, and the lobbying efforts by former Ben Ali era officials in support of the bill. In addition, Nawaat has called the bill “counter-revolutionary”.

The leaked seven-point action plan published by Nawaat sheds light on the presidency's strategies to lobby support for the bill. These strategies include meetings with political parties, economists, legal experts and civil society actors, and a media strategy aimed at emphasizing the “results of reconciliation on the economic and financial performance” through increased media appearances of the bill's supporters and a social media campaign to “pass positive messages to adopt and highlight the benefits of reconciliation.”

These issues are not novel for Ben Gharbia, who has worked to improve transparency and accountability in Tunisia for more than 15 years. He played a pivotal role in the release of US State Department documents and cables that corroborated allegations of deep corruption and systemic human rights abuses by the Tunisian government under the Ben Ali regime, known as Tunileaks. Their release was a critical precursor to the Tunisian revolution, which brought about the Ben Ali's ouster in January of 2011.

In a reflective blog post that he published in 2013, Ben Gharbia described the impact of Tunileaks:

Tunisians didn’t need Tunileaks to tell them their country was corrupt. Tunisians had been gossiping and joking about the corruption for years. What was different was the psychological effect of an establishment confronted so publicly with its ugly own image. It was that the government knew that all people knew, inside and outside the country, how corrupt and authoritarian it was. And the one telling the story wasn’t a dissident or a political conspirator. It was the U.S. State department, a supposed ally.

After spending more than a decade outside of Tunisia, fearing persecution by the Ben Ali regime, he returned to Tunisia following the revolution where he continued to work on the Nawaat platform which serves as a space for independent media. The platform was awarded several international and local prizes including the 2011 Reporters Without Borders Netizen Prize for promoting freedom of expression online, the EFF Pioneer Award for its “crucial role in covering the social and political unrest in Tunisia” during the winter of 2010-11, and the 2015 prize of the best interactive website in Tunisia, awarded by the country's journalists union.

Ben Gharbia's lengthy interrogation comes amidst concerns about government attempts to interfere with the media in recent months. Last April, the presidency intervened to prevent the broadcasting of an interview with the former head of the president's office, while a month earlier the ministry of higher education refused to answer questions and the interview requests of  Mohamed Yousfi, editor of the Hakaek Online news website.