Who Are the #Istanbul10? Learn About the Work of Jailed Human Rights Defenders in Turkey 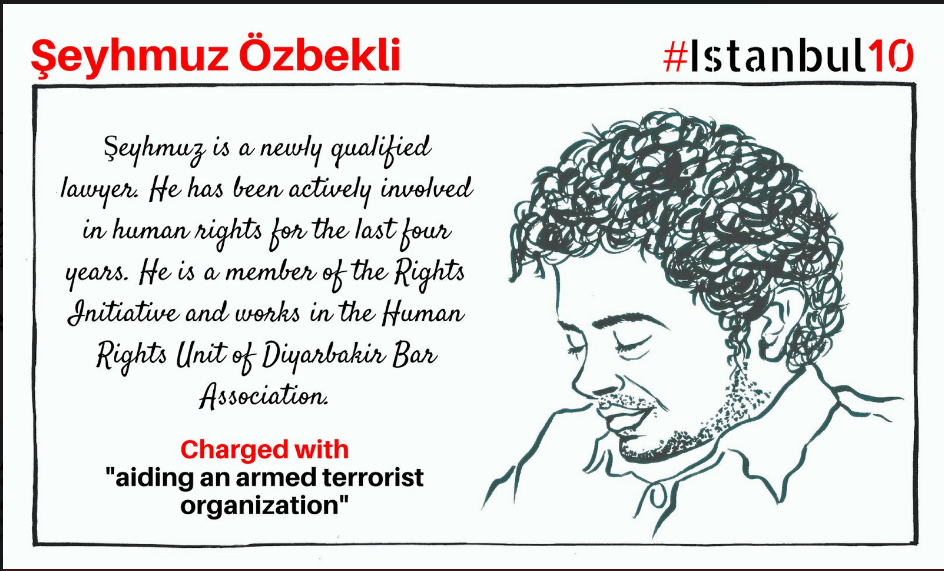 #ŞeyhmusÖzbekli is one of the #Istanbul10 who was arrested on July 5. Image tweeted by @aseem_trivedi.

A group of human rights defenders and information technology trainers detained in Turkey since July 5 continue to face jail time and legal harassment, due to accusations that they were “aiding a terrorist organization without being a member.”

Six of the defenders have been remanded in prison since July 18. The remaining four, who were released briefly last week on bail and on condition of judicial control, have since been arrested again. Nalan Erkem, İlknur Üstün, Nejat Tastan, and Seyhmus Ozbekli were taken back into police custody on July 22, joining the other rights defenders and trainers behind bars.

On July 25, Nejat Tastan and Seyhmuz Ozbekli were again released under judicial control.

Woke up to a good news this morning! Rights defender #NejatTaştan is released with two days a week jucial control #FreeRightsDefenders pic.twitter.com/SMtKZIhajk

Human rights defenders Nejat Taştan & Şeyhmus Özbekli released today but 8 of the #Istanbul10 are still in jail & should be freed pic.twitter.com/NU656hEijh

Amnesty International described the new arrests as a “cruel and retrograde step”.

The original July 5 arrests took place while the group was gathered for a digital security and information management workshop on one of Istanbul's islands, Buyukada. Police raided the workshop, detained the participants, and confiscated electronic equipment including computers and mobile phones.

International calls and demands have been made in support of #Istanbul10 as they are often referred to. A closer look at their backgrounds and achievements in the field of equality and freedoms demonstrates without a need for baseless allegations that their work as rights advocates is as far away as possible from any links to terrorist organizations.

The human rights organizations affected by these detentions play key roles in the human rights community and movement in Turkey. They include Amnesty International Turkey, the Helsinki Citizens Assembly, Human Rights Agenda Association, the Women's Coalition, the Association for Monitoring Equal Rights.

Amnesty International says it was the first time in its 56-year history that a country chair and director had both been arrested at the same time.

Another great cartoon in our free #Istanbul10 campaign from @atiqshahid2. pic.twitter.com/tNKK1cwBls

Seyhmuz Ozbekli (now released), İdil Eser and Ozlem Dalkiran all work with the Helsinki Citizens’ Assembly. HCA is known for its work promoting peace, democracy and civil society throughout Europe. Özlem is also a founding member and former chair of Amnesty International Turkey:

We testify, Nalan was there because she has given years to fight lawlessness.

İlknur Üstün is a member of the Turkish chapter of the Women’s Coalition, an organization that promotes public policies that benefit people of all genders and sexual orientations, and promotes women's participation in civic and political life.

#İlknurÜstün (member of the Women’s Coalition) has been charged with ‘aiding a terrorist organization.’#Istanbul10#FreeRightsDefenders pic.twitter.com/3j1ZJHUjxD

Nejat Taştan, who was released on July 25, is coordinator of Association for Monitoring Equal Rights, an organization that works to promote equality and conducts independent election observation:

The two trainers detained in the raid both work for HIVOS, a Dutch foundation that supports human rights work and capacity building around the globe. The training they led for the group was aimed at helping these civil society organisations build essential awareness and skills on the management of information, as well as how to deal with stress and trauma in the context of their work.

Ali Gharavi believes in non-violence & he cares about the well being of HRDs along with their digital safety! Free Ali, Free #Istanbul10 pic.twitter.com/FU1QfdHE92

Peter Steudtner is a German human rights defender who specializes in managing stress and trauma within small organizations like the ones above.

Global Voices supports the rights of all people to speak freely and engage in peaceful advocacy for human rights and the rule of law. We join these and many other organizations across the globe in condemning these detentions and urging Turkish authorities to release the remaining eight detainees, without condition.