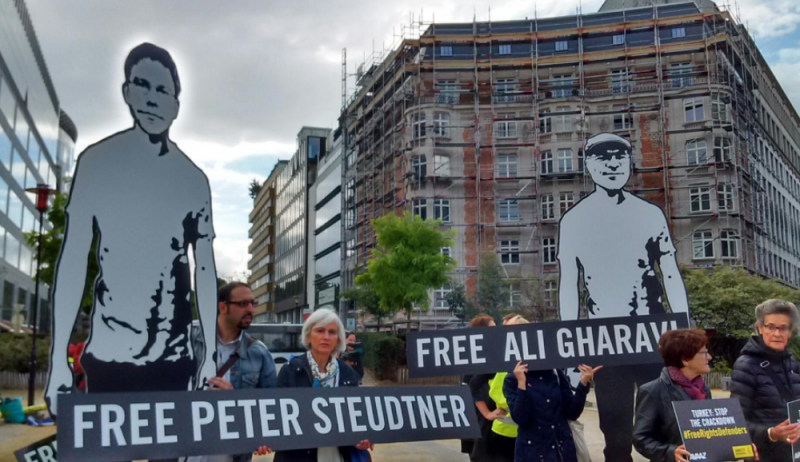 Activists in Brussels welcome the Turkish Minister of Foreign Affairs. Photo shared on Twitter by @@marianne_koch.

A group of human rights defenders have been in jail in Turkey since July 5, after being arrested [2] during a digital security and information management workshop on one of Istanbul’s islands, Buyukada.

Their arrest was met with widespread condemnation from governments and institutions around the world,  and by fellow human rights defenders on social media.

German Chancellor Angela Merkel spoke about the case [3] on July 18, offering solidarity to the group and voicing full support to detainee and German citizen Peter Steudtner:

We are firmly convinced that this arrest is absolutely unjustified. The German government will do all it can, on all levels, to secure his release.

After the ruling that six of the ten rights defenders, including Swedish citizen Ali Gharavi and German citizen Peter Steudtner, would remain in pre-trial custody, [4] the German foreign office summoned the Turkish Ambassador [5] to visit Berlin. Foreign Minister Sigmar Gabriel issued this statement [6], referring to the other 22 German citizens who have been arrested in Turkey since the attempted coup last year, nine of whom are still on remand:

We regard their detention as excessive and illegal. In each case, we have had to fight for consular access, which is a right guaranteed under international law…. things cannot go on this way. We cannot continue as before. We need to be clearer than we have been so that those responsible in Ankara understand that this type of policy will have consequences…. We demand the release of Peter Steudtner, Deniz Yücel and Meşale Tolu, unlimited consular access, and swift and fair trials for them and the other Germans accused of political crimes.

Gabriel also indicated that travel advice to German citizens would be updated accordingly [7] with information about what could happen to German citizens if they travel to Turkey in the current climate, encouraging them to “exercise caution.”

Other members of the German government have offered support for Steudtner and the group, with the Chairman of the Human Rights Committee [8] writing letters to the Turkish Ambassador to Germany and describing the arrests of this group and of the director of the Turkish section of Amnesty International, Taner Kiliç, as “in no way comprehensible.”

In Sweden, Foreign Minister Margot Wallström issued a statement [9], with particular attention to Ali Gharavi, one of the detained trainers who is a Swedish citizen:

It is our opinion that Gharavi was in Turkey to attend a peaceful seminar on internet freedom and human rights and we have urged Turkey to quickly clarify the grounds for charges against him.

On July 21, the EU Delegation to the Council of Europe issued a EU local statement [10]:

The EU expresses its serious concern over these arrests, one month after the detention of the Chair of Amnesty International in Turkey, Taner Kiliç. It echoes the concerns expressed by Nils Muižnieks, Human Rights Commissioner of the Council of Europe, that “the use of criminal proceedings against human rights defenders for conduct that should be protected under the European Convention on Human Rights is unfortunately an increasingly frequent phenomenon in Turkey.

In a press briefing, the European Commission called [11] for the “immediate release” of the group, calling the detentions part of a “deeply worrying pattern” of imprisonment in Turkey.

A group of UN experts, including the Special Rapporteurs for freedom of peaceful assembly and association; the situation of human rights defenders;  and the independence of judges and lawyers, issued a statement [12] through UN Office of the High Commissioner for Human Rights, saying that the arrests were: …having the effect of curtailing people’s rights to freedom of expression, assembly and association, and is particularly alarming.”

Other United Nations agencies have expressed their stance against the arrests too,  including UN Women Executive Director Phumzile Mlambo-Ngcuka, who wrote on July 18 [13]:

I accordingly call on the Government of Turkey to immediately release the arrested women’s rights and human rights activists and to provide its support to those, like women’s human rights defenders, who work for the good of their societies.

From the UK, the Minister for Europe, Sir Alan Duncan wrote [14]:

We continue to urge the Turkish authorities to uphold international standards with regard to the rule of law, including the presumption of innocence, and to protect fundamental rights including freedom of expression and assembly.

British MP David Lammy pointed to the persistent lack of evidence to support the charges against the group in his open letter [15], published on July 14.

On social media, people continue to share links calling for their freedom, including a petition from Amnesty International [16] which has nearly 25,000 signatures, using the hashtags #FreeRightsDefenders, #Istanbul10 and #HakSavunucularınaDokunma [17].

We won't stop fighting back until Turkey releases our colleagues and friends. Add your voice, make them listen: https://t.co/sIGp46kNg0 [18] pic.twitter.com/uD9QEVYQd5 [19]

Amnesty International has organised protests across the world, from Kyiv to Paris, Brussels, Kathmandu, and many more cities worldwide.

Learn more [21] about the detained human rights defenders, and sign the petition to support their release.