In Tunisia's ‘State of Emergency’, a New Police Protection Law Could Allow More Abuse — With Impunity 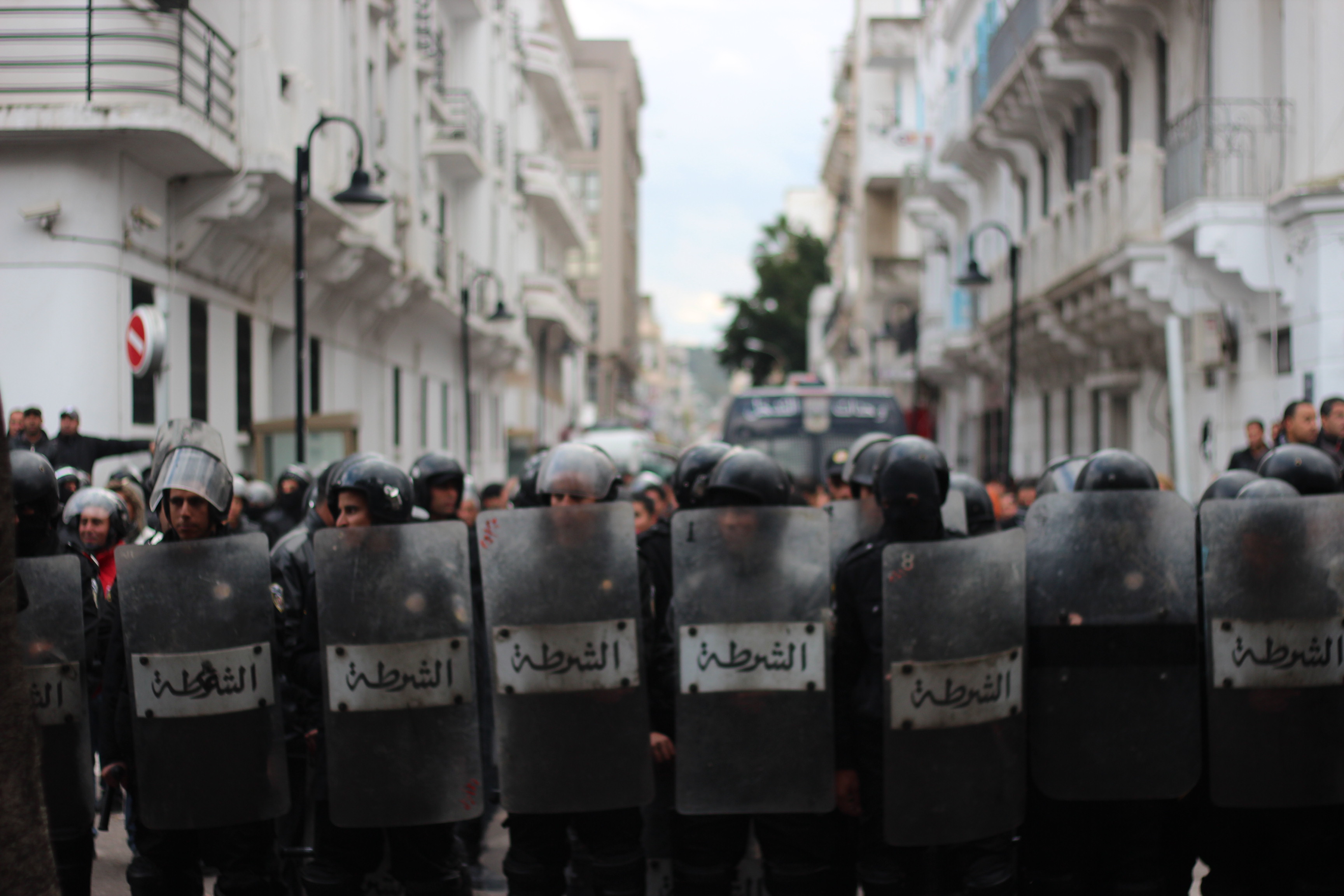 Tunisia has seen many improvements to human rights protections since the 2011 toppling of Zine el Abidine Ben Ali. But the abuse of power by police and security forces remains a serious problem.

The parliament is now considering a law that could make it even easier for police to take advantage of their power, with little accountability to the public.

The new draft law on the “repression of attacks against armed forces” would reinforce criminal penalties for various acts that endanger police and security forces, punish speech that is deemed “denigrating” towards the police, and exempt security forces from criminal liability when they use excessive force.

Originally submitted to the parliament by the former government of Habib Essid in April 2015, the law resurfaced on the parliament's agenda in July and has the support of the country's interior ministry and unions representing security forces.

If adopted, the law could have a chilling effect on free expression, artistic freedoms, and media and press freedoms. The bill would also give security forces a green light to act with even more impunity than it already has.

Police abuse in a ‘state of emergency’

Under Tunisia's ongoing state of emergency, implemented after multiple militant attacks in 2015, authorities have the power to suspend protests, restrict the right to assembly and freedom of movement, ban publications, and arrest anyone suspected of violating public order.

A report released earlier this year by Amnesty International documented several abuses committed in Tunisia's state of emergency including the use of excessive and unnecessary force, house raids without judicial authorization, travel bans, arbitrary arrests, torture and ill treatment.

On top of this, the law addresses several issues that are already covered in other sections of Tunisia's penal code and in the general statutes of the internal security forces. Even before the state of emergency began, authorities were not afraid to put these laws to use.

Blogger Yassine Ayari was imprisoned in 2014 for “defaming the army” and “insulting military high command” through Facebook posts. In 2013, a court sentenced rapper Weld El15 to two years in prison over a rap song in which he called police dogs.

These laws have been used to persecute bloggers, journalists, artists and activists for their criticism of the police or the military institution. And existing provisions in the penal and military codes make it difficult to question police conduct or file complaints against members of the security forces.

It is easy to imagine how a new law reiterating some of these provisions, increasing punishments for violations, and introducing even stronger protections against liability for security officers could be abused even further.

‘An assault on security officers is not an easy thing’

If the police and the military are already legally protected from criticism regarding their conduct, why are they seeking to push forward this new law?

Part of their impetus comes from rising fears about security and threats to the safety of security officers. Since late 2012, dozens of security officers and soldiers have been killed in attacks perpetrated by militant groups or while conducting operations against them. In November 2015, 12 presidential guards were killed in a bus bombing claimed by ISIS. A few months prior, attacks on the Bardo Museum in Tunis and on a beach resort in the coastal city of Sousse injured and claimed the lives of dozens of people, most of them foreign tourists.

This past June, police officer Majdi Hajlaoui was injured while on duty during tribal clashes in Sidi Bouzid and later succumbed to his injuries. His death prompted hundreds of police officers to protest outside the parliament on 6 July 2017, demanding better protections and bringing the debate about the bill back to the table.

In its current form, the bill would not offer more protections to police officers on the ground. But it would better shield them from criminal liability when they use lethal force.

Mehdi Bechaouch, a leader at the syndicate representing officers at the General Directorate of Intervention Units, told privately-owned Shems FM radio that police officers “should not find themselves in jail when implementing the law,” and that the state should compensate officers whose properties are attacked in retaliation for their work.

He reasoned that the bill, if adopted, would “deter” such attacks:

It is true that assaulting a public officer [is already a crime]…but a security officer carries weapons, and assaults on a security officer or headquarters could result in the seizure of weapons…[The bill's aim is to] send a clear message to people that an assault on security officers is not an easy thing and that it could pose a great danger to the security of society

Bechaouch specified that the police union supports the criminalization of physical attacks against security forces, but does not support other parts of the law, which was written under a previous government. He said that his union supports the removal of provisions that criminalize the “denigration” of the police as well as the law's second chapter, which criminalizes unauthorized filming and the disclosure of national security secrets.

The union's voice on this issue could have greater impact on decision-making in parliament, as this December will mark the first time in Tunisia’s history that security forces will be able to vote in local elections.

With the parliament in summer recess until 1 October, it is unclear when the bill will be discussed in plenary session. The bill has so far only been discussed at the parliament's general legislation committee, which on 13 July heard the interior minister and representatives of police unions. The committee also plans to hear representatives of civil society and human rights groups who reject the bill.

The National Union for Tunisian Journalists, the Tunisian Organization Against Torture, the anti-corruption NGO I-Watch, and Reporters Without Borders released a joint statement on July 14 calling on the Tunisian parliament to “immediately withdraw” the “repressive” bill which “would lay the foundation for a dictatorial police state.” Amnesty International and Human Rights Watch have also separately called on the parliament to reject this bill.

Parliamentarians are also voicing concern about the bill. On July 18, multiple lawmakers stressed the need to respect human rights at a session of the general legislation committee:

A number of members of parliament emphasized that it is necessary for the draft to include effective mechanisms to protect the rights of the families of police officers and provide them with social protection, while pointing to a difficult juxtaposition of the need to provide a legal framework to repress attacks on security officers and headquarters of sovereignty with the need to protect public freedoms and human rights.

During that session, Member of Parliament Hassouna Nasfi said that the bill does not really bring “anything new” and does not provide enough protections to security forces in terms of reparations and compensations prescribed to officers who suffer attacks.

Parliamentarian Mourad Hmaidi, from the leftist opposition Popular Front party, agreed. Hmaidi told the National TV that the bill would not bring much benefit and rather would threaten freedoms. “What the police officer and internal security forces and their families need in general is insurance coverage for risks while they are performing their duties,” he said.

In its current form, the bill does not bring meaningful changes to the criminalization of attacks against security forces or to insurance coverage from risks associated with security forces’ work.

The most significant elements of the bill would only shield the security apparatus from criticism, at a time when Tunisia is in need of an open debate about police abuse and misconduct to bring about much needed reforms to the security sector.