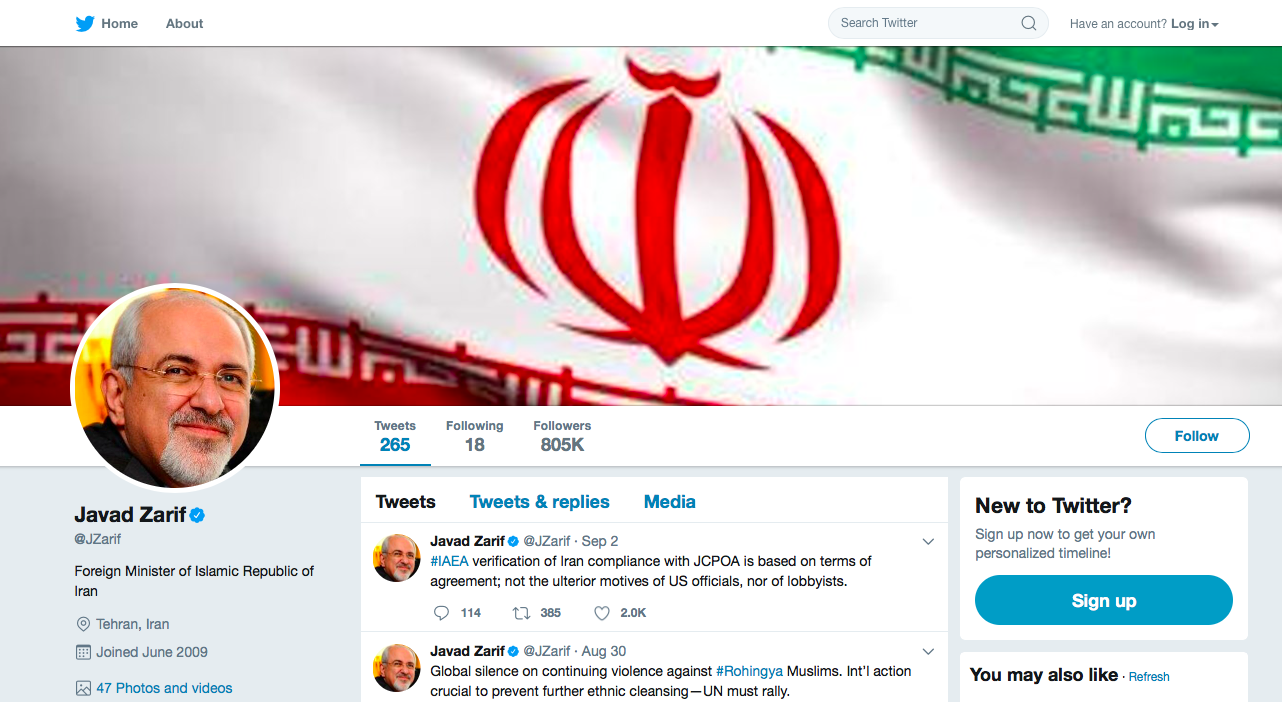 The popular, western friendly foreign minister, Javad Zarif, has announced he will not Tweet in Persian, since Twitter is banned inside the country.

Iranian Foreign Minister Javad Zarif has more than 800,000 followers on Twitter, despite the fact that Twitter is blocked in Iran.

In a recent interview with the Iranian government's official website, dolat.ir, Zarif explained that he only tweets for foreign audiences in English and Arabic, and not in Persian, asserting that his purpose is not to reach audiences inside of Iran, where Twitter is blocked and prohibited.

President Hassan Rouhani came to power in 2013 on a electoral platform that paired promises of a more open internet with a rhetoric of greater freedoms in general. Yet during Rouhani's first term as president (he was re-elected in May 2017) Iranians didn't see his administration deliver on promises to remove technical blockades on both Facebook and Twitter.

Since then, many have questioned the propriety of Rouhani administration officials, including Minister Zarif, using these filtered platforms.

What happened to Rouhani's early promises to open up the internet?

In a widely shared Twitter exchange in 2013, Twitter CEO Jack Dorsey questioned the Iranian president’s decision to use the platform, given that it is inaccessible for other Iranians inside the country.

@HassanRouhani Good evening, President. Are citizens of Iran able to read your tweets?

Evening, @Jack. As I told @camanpour, my efforts geared 2 ensure my ppl'll comfortably b able 2 access all info globally as is their #right.

But Rouhani's response to Dorsey rings hollow one month into his second term, especially as his most popular minister (Zarif) appears to have acquiesced to this state of censorship.

The legal implications of using these platforms has been questioned by hardline figures, including the Deputy Prosecutor General of Iran, and the head of Iran's Committee Charged with Determining Offensive Content (CCDOC) Abdul Sayyed Khoramabadi, who stipulated as recently as August 2017 that membership in filtered social networks such as Twitter was a “violation.” He also noted that the use of Twitter by Rouhani administration officials was “problematic.”

On the other hand, many point to the fact that members of the government can often access uncensored internet, which gives government officials a privileged position for access to information, putting them on unequal footing with the rest of the country. It is widely known that access to the internet in government offices, or even international headquarters belonging to the United Nations, do not face the same hurdles as regular citizens. This 2009 blog post (in Persian) instructing Iranian Internet users on how to connect to the unfiltered internet of the Islamic Republic of Iran Broadcasters offers a popular illustration of the issue.

Zarif, who won widespread popularity across Iran for finalizing the 2015 nuclear deal between Iran and the P5+1, drew international attention when he became the first to break news of the negotiations, through his own Twitter account.

Zarif's 2 September statement, however, are increasing concern among Iranians that Rouhani's promises of a more open internet in Iran may never be fulfilled.

Currently since Twitter faces internal regulations as a social media platform, I only use it on the level of international relations and for this reason I never tweet in Persian, and only post in English or Arabic, so within the international context I can utilize this platform which is ideal for being effective in the diplomatic space.

Of course, I do think it can be an effective tool for inside the country as well. For internal communications platforms I have made an effort to use Instagram; although on Instagram I am just learning how to use it and have more experience on Twitter, but since the beginning of 1396 (March 21 was the start of the Persian year 1396) I've started using Instagram regularly, and I'm hoping that through this method which is allowed and used widely by Iranians, I can find a way to have good communications with my dear friends inside of Iran as well.

But a quick scan of Zarif's tweets suggests a different reality — in fact, it includes numerous tweets in Persian. A post from 25 February 2016 even encouraged Iranians to participate and vote in the 2016 parliamentary elections:

Widespread and smart participation in the elections guarantees a strong national authority and a better future. Tomorrow we will all vote so that no one anywhere will be able to threaten an Iranian.

Indeed, Zarif's recent Twitter posts have ceased to contain Persian language content. Since securing the 2015 nuclear deal, Zarif has gotten pressure from hardliners for betraying the country, who believe he conceded too much to the west in the deal. The fact that Zarif used Twitter to encourage Iranians to vote for the 2016 parliamentary elections — and not the 2017 presidential elections — might be a sign of his effort to reduce controversy over the platform, which is largely kept filtered by the hardline political faction placing pressure on him.

Rouhani also appointed a new Minister of Information, Communications and Technology in late August. While celebrated for being the youngest member of cabinet in the Islamic Republic of Iran's history at 36, Mohammad-Javad Azari Jahromi's credentials come largely from his previous work developing Iran's surveillance infrastructure. He also played a role in interrogating and imprisoning activists while working with the Ministry of Intelligence under the hardline and populist President Mahmoud Ahmadinejad, a fact that has caused alarm among activist and human rights defenders.

Jahromi too is active on Twitter and has indicated he would like to remove the filter on Twitter given the “right circumstances”, which he says would require negotiations with Twitter. This has raised concern that Twitter will cooperate with the Iranian government to allow a limited, censored version of Twitter, perhaps similar to what they now offer in Turkey.

It remains unclear if Twitter will engage in such negotiations — the company has given no public indication as to whether they will cooperate or not. When responding to an inquiry on the matter from BBC Persian, a spokesperson replied: “We do not have any opinions or comments on this issue.”