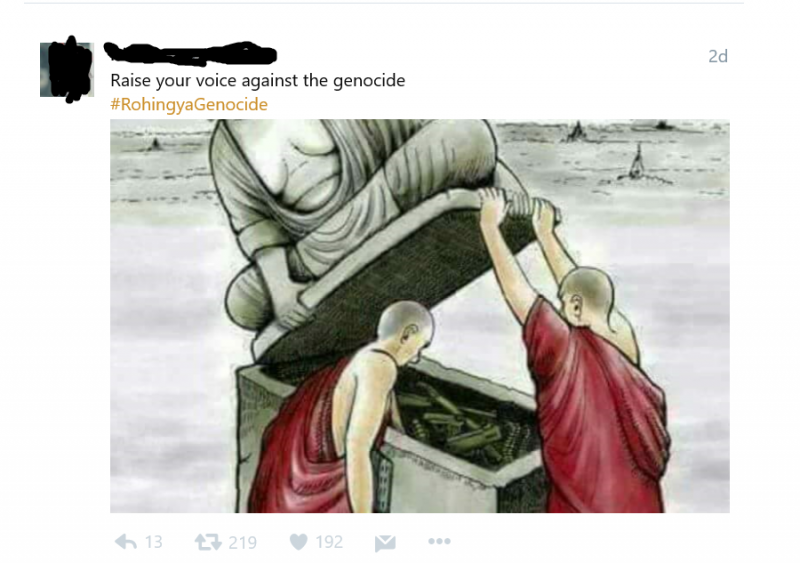 An example of a pro-Rohingya hate speech post disparaging Buddhists in Myanmar, who are accused of committing ethnic cleansing against the Rohingya people. Screenshot from Twitter, September 4.

Myanmar’s internet exploded with hate speech, fake news photos, and racist narratives after the Myanmar military clashed [1] with Arakan Rohingya Salvation Army (ARSA) on August 25, 2017, near the Bangladesh border in the northwestern part of the country.

The violence lasted for days with the Myanmar government immediately declaring ARSA a terrorist group while launching aggressive ‘clearance operations’ [2]in the villages of Rakhine state. The government and ARSA blamed each other for civilian casualties caused by the conflict.

As the violence continues, the Myanmar government has tried to assist in relocating [3] non-Muslim ethnic peoples in the area, but Rohingya civilians, of which there are roughly one million, have been less fortunate. Thus, tens of thousands of Muslim Rohingya refugees are crossing [4] the Bangladesh border [5] to escape [6] the fighting.

While multiple ethnic groups have been affected by the conflict, the international media has emphasized [7] the Myanmar government's treatment of non-militant Rohingya people fleeing the violence, and there have been many reports of atrocities [8] perpetrated by the military against the Rohingya. Meanwhile, local media outlets have highlighted the deaths [9] of people from other ethnic groups living [10] in the area, reportedly due to the attacks made by ARSA.

The international community has urged [11] the Myanmar government to stop the violence and take action to help the refugees. However, some in Myanmar have criticized the international media, calling them biased for ‘ignoring’ the plight of the local Buddhist population who were also displaced by the fighting between the government and ARSA.

Although the publication of hate speech propaganda and fake news photos has plagued [5] Myanmar’s online space in recent years, it became heavily violent again after August 25. These tensions have generated an “information war” online with a spate of malicious online propaganda seeking to re-frame the dominant international narrative about the conflict.

Heavily present in these images is the mischaracterization of the Rohingya as Bengalis. Rakhine state is home to many minority ethnic groups such as the Rakhine, Mro, Rohingya and Dai-net. In contrast to the other groups, the Myanmar government does not recognize the Rohingya, who are mostly Muslim, as an ethnic group. Instead, they are referred to as “Bengali.” 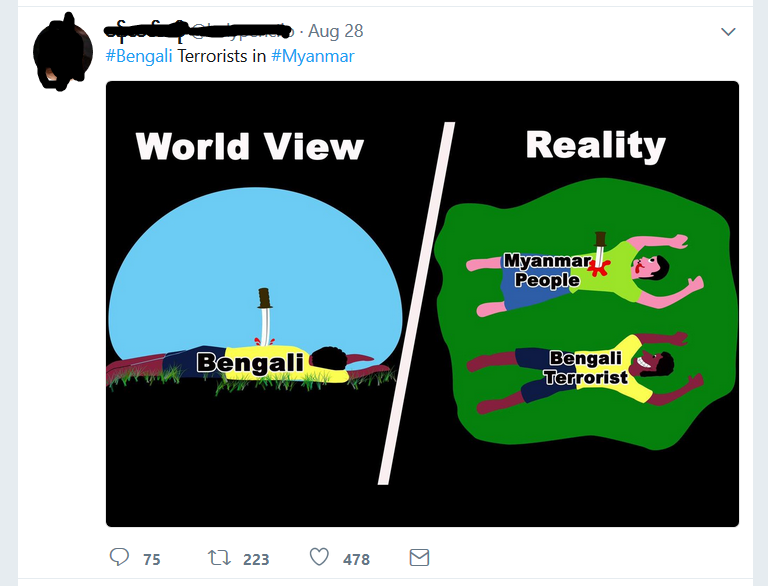 A widely shared illustration comparing the “world view” or international perspective on the conflict with “reality”. Screenshot from Twitter, September 4.

Bengalis are one of the largest ethnic groups in South Asia. But in Myanmar, Bengali has taken on its own meaning. It has become a derogatory word to refer to the Rohingya as undocumnted immigrants from Bangladesh. This designation along with the slur ‘kalar [12]‘ has evolved into racist slander often directed toward the Rohingya in Myanmar, both online and off.

Other images decry international media houses for focusing on the plight of the Rohingya. 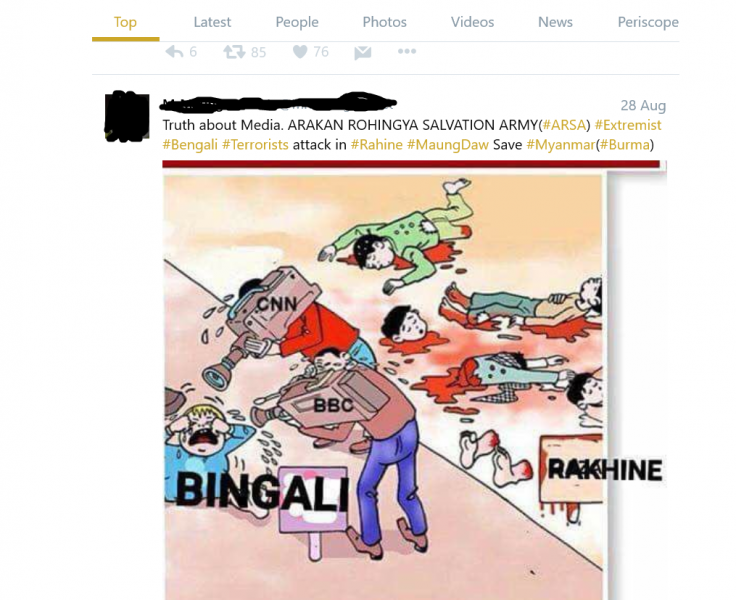 A widely shared image on Myanmar's current conflict, implying that international media allegedly are ignoring the deaths of non-Rohingya minorities in Rakhine. Screenshot from Twitter, September 4.

The image below insinuates that the Rohingya have somehow lured international sources into spreading misinformation about the situation: 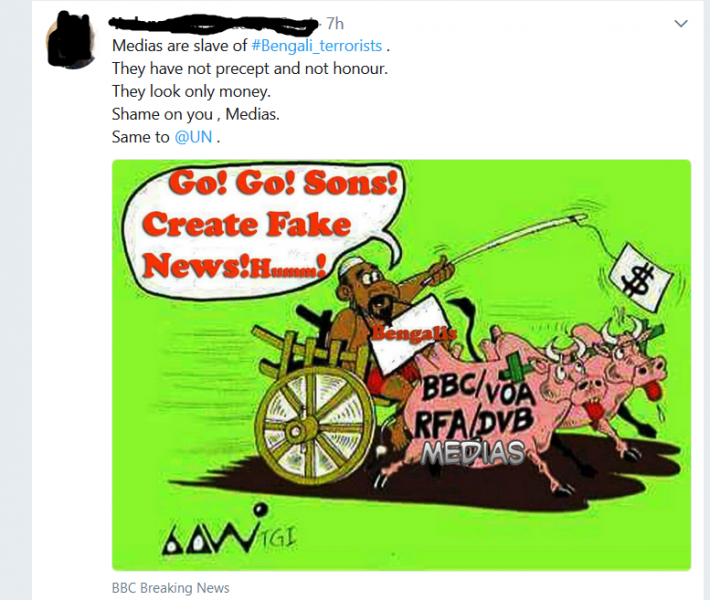 A widely shared hate speech image on Myanmar's current conflict, implying the Rohingya have too much control over the international media. Screenshot from Twitter, September 4.

Images like the ones above and other far more graphic representations of these ideas have gone viral within social media networks in Myanmar.

In addition to what is clearly organic sharing and re-posting of these images, some observers have noticed trends in sharing that appear to be coordinated.

Independent analyst Raymond Serrato detected [13] a strange spike of 1,500 new Twitter accounts with provocative hashtags that appeared [13] after the August 25 clash. Many of the dubious accounts have spread pro-government messages that also feature hashtags such as #Bengali or #BengaliTerrorists. It is unknown who is behind the accounts, but the trend echoes similar “Twitter brigade” phenomena in a variety of countries including India  [14]and the United Arab Emirates [15].

In another instance, a campaign on Facebook has been urging users to give negative reviews to BBC Burmese Service and Voice of America (VOA) Myanmar pages with one star for reporting on the Rohingya, while urging users to give five stars to the Myanmar State Counselor Facebook page. Identical page reviews from unique accounts (see examples below) indicate that this is a coordinated effort to discredit the media outlets. 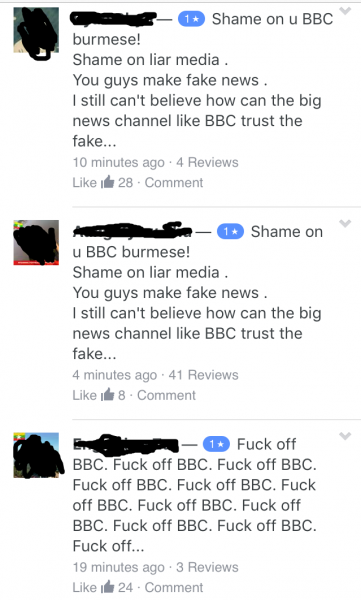 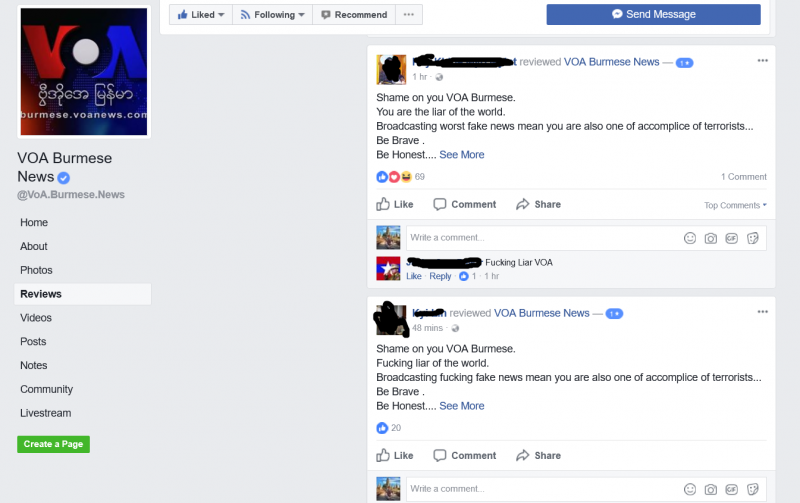 Reviews on VOA page. Screenshot by the author on September 4.

It is difficult to obtain accurate information about the conflict, as journalists both from the region and from abroad have been struggling to gain access [17] to the conflict areas. This has left a void of verified information and images from the center of the conflict, which too often is being filled by images that have been doctored or that came from other countries altogether. Such photos are being used by both sides to advance their propaganda.

Below are two examples of an anti-Rohingya hate speech posts (note the hashtag terminology): 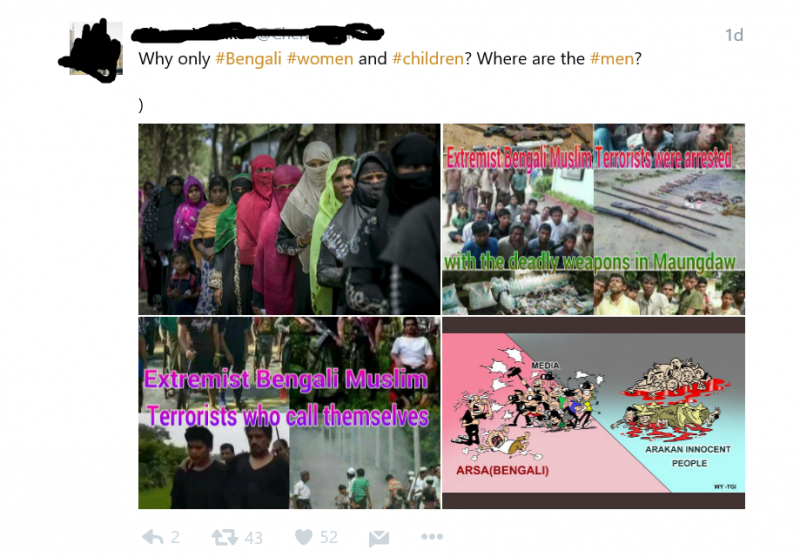 Here are some examples of pro-Rohingya photos that were later proven to have come from Nepal and Indonesia: 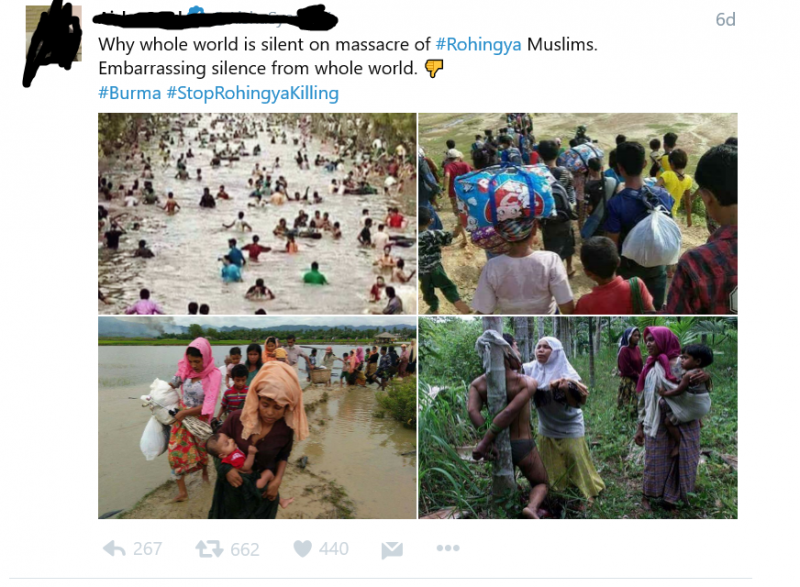 An example of a fake news post with reused photos. The image on the upper left side appears on a website [18] reporting Nepal flooding on August 13. The upper right and lower left images need to be confirmed for authenticity as they only appeared on Twitter after the violence. The lower right side image is from Banda Aceh, Indonesia. Screenshot from Twitter, September 4.