Taiwanese Activist Was Forced to Confess on Camera to ‘Smearing the Chinese Government,’ Allies Say 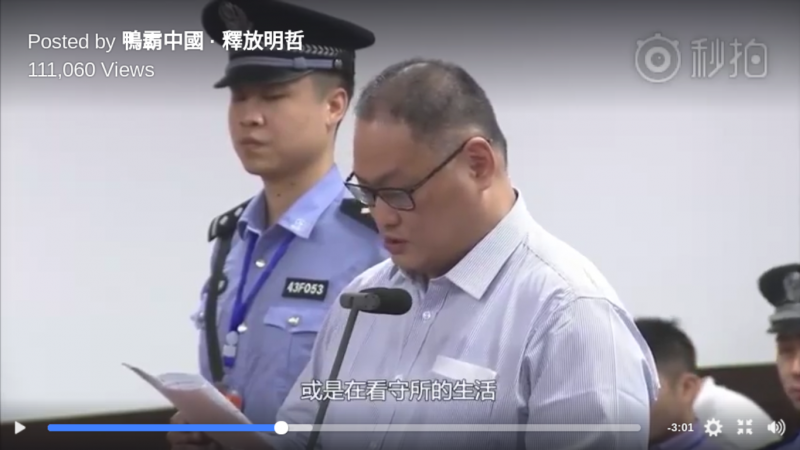 Taiwanese activist Lee Mingche reads his confession in a mainland Chinese court. The videotape of the trial was released on various social media platforms. Screen capture from Miaopai.

The trial, held September 11 in a court in Yueyang city in China's southern Hunan province, was videotaped and streamed for the public on various social media platforms including Weibo, a popular service similar to Twitter.

In front of the camera, Lee read a statement that praised the mainland Chinese judicial system and said he was deeply regretful of what he had done. His wife and and human rights defenders say the confession was forced.

In the statement, Lee confessed to the “subversive act” of circulating and writing articles that “attacked and wickedly smeared the Chinese government” and “promoted Western-style multi-party democracy” on various social media platforms since September 2012.

The indictment also accused Lee and his co-defendant Peng Yuhua of incorporating a company called “Plum Blossom” in October 2012 and drawing up a plan to advocate for regime change in China. Peng, like Lee, pleaded guilty.

Lee went missing in southern China on March 19, 2017. Ten days later, Beijing confirmed his detention, saying that he was engaged in activities that were “harmful to national security”. In May, authorities said that Lee was being held in Hunan province under investigation for “subverting state power.” He will receive his sentence later this year.

‘This is just another drama staged by the Chinese government’

Lee’s wife Lee Chingyu has been advocating for her husband's release. Before she traveled to mainland China to attend the trial on September 9, she has preempted the “forced confession” in an open statement:

At this moment, I urge all the Taiwanese, if you see Lee Mingche confess against his will in court, with shameful words and behaviors, please forgive him. This is just another drama staged by the Chinese government, it is called “forced confession.”

After attending the trial, Lee Ching-yu had briefly met with her husband. The meeting was videotaped and footage showing him asking his wife not to make further comments on the case was also released online. Lee Ching-yu says he also made these remarks against his will.

The Chinese government’s trial of Lee Mingche is a classic performative trial, the judge, prosecutors and lawyers are just actors who have no judicial function. To this day, there has been no hard evidence that Lee’s speech and actions, which are all peaceful in nature, went beyond the right to free expression and assembly as protected by Article 35 of the mainland Chinese constitution.

Though Taiwanese people were prepared to see Lee being “forced to confess,” many still expressed sadness watching the confession video. Chang Tieh-chih, a human right activist in Taiwan, exclaimed on Facebook:

About Lee Mingche, it is hard to imagine what kind of cruelty he has gone through that makes him says something that is opposite of his personal beliefs. This is so sad.

If the trial was, as some have claimed, a political show, what exactly was the message it was trying to get across? A September 12 editorial from People’s Daily, the official newspaper of the Chinese Communist Party, stressed that Lee's trial was a demonstration of China’s power in using law:

Judging from the open trial on September 11, China’s power in using law is convincing. Any effort that attempts to criticize the Chinese political and legal system using this case, or to use the case to achieve personal gain, has failed.

What can’t be denied is that the openness and transparency of the trial shows that no matter if the person is mainland Chinese, or from Hong Kong, Macau, Taiwan or other countries, any act that attempts to subvert the regime of the People's Republic of China will be punished. Using Lee Mingche’s case to manipulate cross-strait relations [between China and Taiwan] is doomed to fail.

Others think the case shows that using the rights of free expression to criticize the Chinese government, and the right to assembly is subversive to the state. As Hong Kong based human right activist Natalie Hui pointed out on Facebook:

The “evidence” presented to the Chinese court are 40 posts published online, using social media QQ to form e-groups. These are usual online activities that all Taiwanese are doing every day. If this is called “subverting state power,” there are tens of thousand posts criticizing China every day, the Chinese government should be overturned.

Professor Chen Mingfong from Taiwan National Chengchi University: China only looks strong on the surface. Its political system is very fragile. Such a conviction is to convict all Taiwanese as guilty. The open trial has drawn a line between China and Taiwan. We are all standing by Lee Mingche because we are all standing by democracy and human rights.