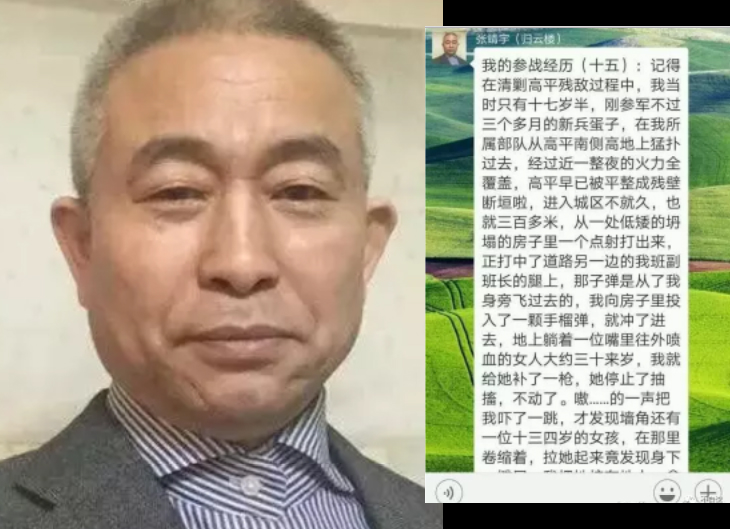 A former Chinese solider boasted to a private chat group this week that during the Sino-Vietnamese War, he killed a Vietnamese woman and raped her teenage daughter.

Chinese authorities have been struggling to contain online outrage in response to the post of Zhang Jingyu, a self-described Maoist patriot, who told his story to a private group on the social media platform WeChat.

Zhang described how in 1979, at just 17 years old, he went into the village of Cao Bang in Vietnam in the midst of a crossfire, where he killed a woman and raped her teenage daughter in the ruin.

Zhang was caught by the head of the combat team and sentenced to one week in solitary confinement after he returned to China. After that, the army dismissed him, but recommended him to a college to study foreign languages.

The brief Sino-Vietnamese War was declared by former Chinese leader Deng Xiaoping in 1979 after Vietnam invaded Cambodia. The Chinese People's Liberation Army captured Cao Bang near the border area in less than two weeks, but did not enter the Vietnamese capital of Hanoi.

In Zhang's comments, he showed no remorse for his actions:

Killed her mother, raped her 13-14 year-old daughter. They were all soldiers. During the war, the only good Vietnamese people were the dead ones.

I did it when I was 17.5 years old. Would you dare to do such a thing? If you did not have the courage, I tell you: you would be lying underneath the hero's tomb. But I'm still alive…

Despite efforts to censor the tale, Zhang's post has been screen-captured and since has gone viral on Chinese social media. Netizens have widely condemned his actions and called for authorities to investigate the case and clarify the historical facts.

Thus far, there has been no public information regarding an official investigation. But there has been ample censorship of online criticism and discussion about the incident.

Nearly all discussions of the post and associated events have either been censored or are too graphic for public re-distribution. Below is a typical censored comment:

Even if Zhang Jingyu's story is a fiction and he never raped the teenage girl or he hadn’t been a soldier at all, his narrative has an adverse effect on the People’s Liberation Army. If he is not punished, there will be more Zhang Jingyus or patriotic thugs who stand out to challenge the baseline of humanity. By then, nothing can be done [to undo the wrong]. Censorship or internet shutdowns won’t work.

Those who managed to climb over the Great Firewall left their comments on Twitter. Below is one:

#Killing kid’s mother, raping a 13-year-old teenage, these are serious crimes in any country. But in CCP’s China, when a People’s Liberation Army soldier committed such serious crimes, the punishment was dismissed from the army and one week solitary confinement. Till now, he did not have any remorse and boasted about his crime. Please remember this ugly creature and remember his name: Zhang Jingyu. Screen name: Gui Yun Luo.

As all criticisms on Chinese social media platforms were censored, Chinese blogger Li Hanfan decided [6] to praise Zhang for telling the truth about the Sino-Vietnamese War:

If it is not self-defamation, Zhang is reviewing history and retelling historical facts. This should be praised.

What we, in particular our government and our army, need to do now is to investigate if Zhang Jingyu is telling the truth. If he is, then we have to take the history seriously. Our government and army should apologize sincerely to Vietnam and compensate for such serious crimes. We should even send this devil to military court.

Of course, it is also possible that Zhang Jingyu had made up the story, he just wanted to be famous…If this is really the case, our government and army should investigate thoroughly and explained the situation to Vietnam. Then punish the rumor creator who has defamed our admirable soldier.

The response to Zhang's comments underlines the imbalance that many Chinese netizens see in the state's approach to so-called “rumors” online. While some types of political content are subject to heavy censorship, others are not.

Earlier this month, officials released new regulations [7] that hold people who run chatrooms and message groups — who are often just regular citizens — criminally liable for the circulation of rumors, scams and politically sensitive topics in such online groups. Many say the crackdown has targeted views that are critical of the Chinese government and party authorities. Yet speech that is framed as being patriotic — even when it is as inhumane and bellicose as Zhang's — is spared punishment.