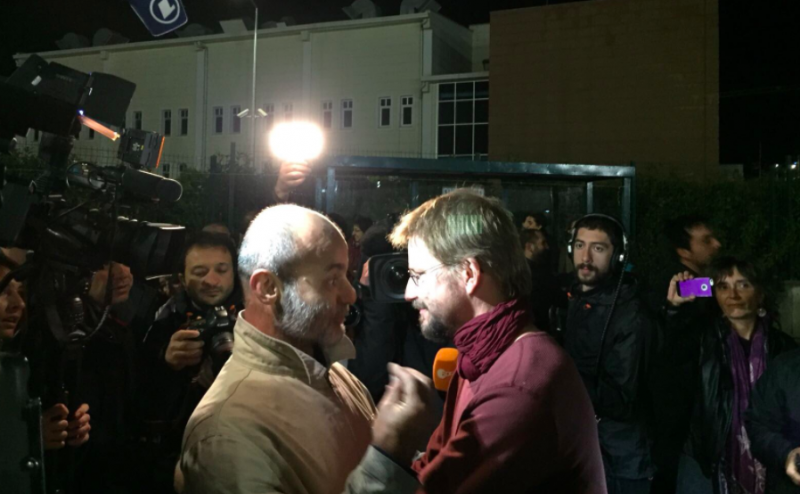 Nejat Tastan and Peter Steudtner embrace among a crowd of media and supporters, following their release. Photo shared by Fotis Flippou on Twitter.

It was a long day in court for the Istanbul 10 on October 25, but one that ended with joy.

Ten human rights defenders — including Amnesty International Turkey director Idil Eser — appeared in court on accusations of membership in a terrorist organization, after spending nearly four months in jail. The proceedings began at 10 a.m. local time, and ended around midnight with the release of all 10 defendants, pending trial.

The defenders had been behind bars since July 5, 2017, when they had gathered for an information management and wellbeing workshop on one of Istanbul's islands, Buyukada. Police raided the workshop, detained the participants, and confiscated their electronic equipment.

The trial of the Istanbul 10

After hearing testimony from each of the defendants, the prosecutor requested release on bail for all but one of the group. Some hours later, the judge ruled that all 10 should be released. The next hearing is expected on November 22.

Veli Acu, who works with the Human Rights Agenda Association, and Ozlem Dalkiran, who works with the Helsinki Citizens Assembly, were issued mandatory travel bans as part of their conditional release. The remaining eight defendants were released without condition, pending trial. Amnesty International Turkey chair Taner Kilic remains in pre-trial detention due to a separate case against him. His case was heard in Izmir on October 26, the day after the trial of the Istanbul 10, and despite the previous day's decision, the judge ruled to continue his pre-trial detention.

Though recording was not allowed from inside the courtroom, journalists and supporters live-tweeted updates throughout the day. Many of the defenders used their statements to draw attention to inaccuracies in the charges against them:

Turkish authorities say case has nothing to do with @Amnesty. But, as Idil now explaining, all evidence against her relates to our work.

The defenders also called attention to the way they had been treated inside prison:

#GunalKursun: We were kept with lights on for 13 straight days, without perception of day or night #FreeRightsDefenders

#NalanErkem: I had gastric bleeding. After arrest couldn't access treatment for 2 months. Bleeding went on for 2 months.

Peter “my family can’t come to Turkey so I can only speak to them for 10 minutes every two weeks on the phone.”

Ali Gharavi asks for “immed. & uncond. release from this torturing situation” Says he is concerned about his health and sanity. #Istanbul10

Amnesty International welcomed the release of the rights defenders in a statement by Salil Shetty, their secretary general:

Today, finally, we celebrate that our friends and colleagues can go back with their loved ones and can sleep in their own beds for the first time in almost four months…Tonight we take a brief moment to celebrate, but tomorrow we will continue our struggle.

In an emotional statement outside the courtroom speaking to a group of journalists, German citizen Peter Steudtner thanked everyone for their support. “I am grateful, we are all really grateful,” said the stress management trainer.

Joining him and expressing his gratitude was his colleague Ali Gharavi, a Swedish citizen:

We have a big new family now. Thank you everyone. Wherever you are, however you did it, you got us out – thank you very much.

In total, the group spent 113 days behind bars. As the news of their release circulated, friends and colleagues joined the celebrations online.

Good news from #Turkey as all the #Istanbul10 released on bail. Baseless charges must now be dropped unconditionally at 22 Nov hearing. pic.twitter.com/hu2y4Mj5d4

The pro-government Turkish media — that has previously been quick to accuse rights defenders of connections to terrorist organizations — were largely quiet on the day of the trial and immediately after.

Convicted by the pro-government “media” but released by the courts. #Büyükada #Istanbul10 pic.twitter.com/D6jXR9ih6z

They branded all of them as agents and other things. Now all of them are released. Will those calling them agents feel shame? I don't think so

In her testimony to the court, Idil Eser, who has been a central figure in this story, was quoted explaining that she has no regrets:

[Amnesty International Turkey director] İdil concludes her evidence “I don’t have anything to regret. I just did my work as a human rights defender”

For now, the Istanbul10 have been released from jail and are reunited with their loved ones. In advance of their next court appearance on November 22, Global Voices calls for all charges to be dropped unconditionally, and for Taner Kilic to be released.