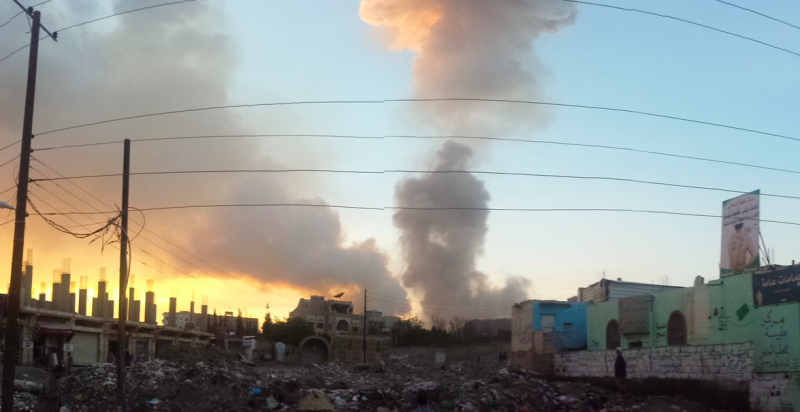 Yemeni blogger Afrah Nasser was awarded this year’s International Free Press Award for her work covering the conflict in Yemen despite the many obstacles faced by journalists in the country. But Nasser, who also holds Swedish citizenship, was nearly unable to attend the awards ceremony in New York in person, because of the US travel ban on Yemeni nationals.

After three applications and many letters in support of her application, Nasser finally obtained her visa from the US Embassy in Stockholm, where she resides.

I never really had faith in the power of media & public opinion as I have today. Makes me think of people who don’t enjoy my high media profile. This is why, we need to get the tragedy in Yemen as well-known as hell so we can all help pushing an end for it!

While Nasser has done much of reporting from her home in Sweden, Yemeni journalists working on the ground face much graver obstacles.

Among them is political commentator and writer Hisham Al-Omeisy, who was detained by Houthi rebels without explanation in August 2017. This week, it was reported that Al-Omeisy was arrested on charges related to his correspondence with US-based organizations.

Al-Omeisy has been actively tweeting about the humanitarian crisis and violations committed by both warring parties in the ongoing conflict in Yemen. He also has analyzed and spoken about the conflict to international media including the BBC, CNN, Al Jazeera, and NPR.

For more than two years, a coalition of Houthi rebels and forces loyal to former authoritarian president Ali Abdullah Saleh (who was removed from power following street protests in 2011) have been fighting to seize power from the internationally-recognized government of President Abdrabbuh Mansour Hadi. Hadi’s government is also supported by a Saudi-led airstrike campaign.

Journalists and media covering the conflict face risks from all warring parties, making it difficult for Yemenis and the outside world to get information on what’s already been described as a “forgotten war”. Placing restrictions on key voices like those of Nasser and Al-Omeisy only exacerbates the situation.

The Turkish court in Istanbul conditionally released eight of the ten human rights defenders on trial who were arrested in July 2017 on accusations of “membership in a terrorist organization” while attending an information management workshop. Among the defendants was Idil Eser, the director of Amnesty International’s Turkey chapter. In their court testimony, multiple defendants explained that they had never even heard of the terror organizations that Turkish public prosecutors accused them of supporting.

In the days leading up to the trial, netizens tweeted in support of the #istanbul10 using the hashtag #FreeRightsDefenders. The group is expected to reappear before the court on November 22.

Two political party workers were arrested by the Pakistani Federal Investigation Agency, for allegedly writing posts critical of government and state institutions. The workers, who are affiliated with the ruling Pakistan Muslim League – Nawaz (PML-N) party, have been charged under the penal code along with multiple sections of the Prevention of Electronic Crimes Act (PECA), which carry a maximum sentence of 14 years in prison.

Ironically, the PML-N party was responsible for pushing through the controversial PECA law, despite opposition from digital rights advocates. The PML-N has been engaged in a rift with Pakistan’s powerful military establishment since August 2017, when the Supreme Court disqualified former Prime Minister Nawaz Sharif following a corruption inquiry into his family’s offshore wealth, sparked by the 2016 release of the Panama Papers. The Ministry of Information Technology, which was instrumental in pushing the electronic crimes law through, now admits that it has no oversight mechanism in place and the law is being misused.

Other political workers and journalists have previously been interrogated and arrested under different sections of the law as well, an indication that authorities may be using the law as a silencing tool.

Palestinian man arrested due to poor translation on Facebook

A Palestinian construction worker was arrested by Israeli police after posting a picture of himself with a bulldozer and inserting the caption, in Arabic, “good morning.” The post was erroneously translated (into Hebrew) by Facebook as “attack them.” The man has since been released, and Facebook said it is investigating the issue.

Kuwait’s DNA law was struck down by the Constitutional Court in a decision that is being lauded as a positive step for the protection of citizens’ privacy. The law — which required all Kuwaiti citizens, residents and visitors to provide DNA samples to authorities for storage in a database operated by the Interior Ministry — was passed following a 2015 suicide bombing that killed 27 people. Anyone who refused to comply with the law faced one year in prison, a fine, and sanctions that could include canceling their passports. The emir requested the law be revised to “safeguard people’s privacy.” It is likely that Parliament will amend it so that only suspected criminals are asked to give their DNA.

Need to prove your loyalty to the Chinese Communist Party? There’s an app for that.

Apps designed by the Chinese Communist Party hit China’s Apple and Android app stores surrounding the 19th National Congress of the Communist Party. Estimates of the number of CCP apps range from dozens to up to 400, with many app developers building party apps for local party branches and party organizations. Among the apps is Smart Red Cloud, which “aims to use artificial intelligence to educate and evaluate party members” through ideology tutorials, chat functions and party-related activity notifications.

The apps disseminate information and enable the CCP to monitor and evaluate party members’ political orientation. At least one state-owned company, the China Tiesiju Civil Engineering Group, ranks party members on a monthly and weekly basis in response to scores on tests of party knowledge, penalizing users who perform poorly and rewarding those who perform well.

Chelsea Manning was turned away at the Canadian border while trying to vacation in Montreal and Vancouver. The former US military officer and leaker of documents demonstrating human rights violations committed by the US government in the Iraq war was detained overnight and told she was inadmissible “on grounds of serious criminality.” A Canadian lawyer representing Manning has submitted a formal request asking the government to reconsider its decision. More than 40 human rights organizations and academics sent letters to the Canadian government in support of the human rights activist.