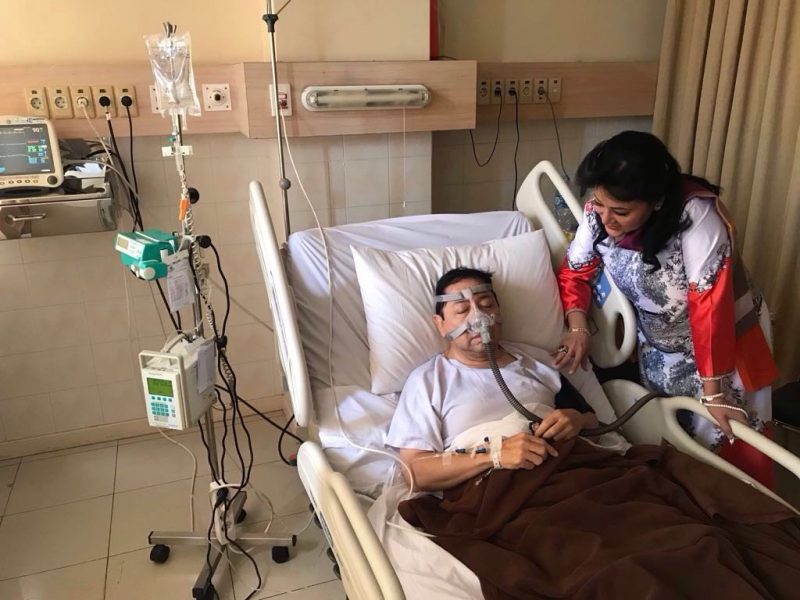 Dyann Kemala Arrizqi now could face up to six years in jail for sharing on social media a photo of Setya in a hospital bed, which Setya's lawyers say “defamed” the House Speaker. Police warned that nine other individuals will be charged for violating the anti-defamation provision of the Information Technology Law (ITE) for sharing the photo and associated memes on social media.

Setya has faced increased public scrutiny since late September 2017, when he failed to appear at two separate hearings of the Corruption Eradication Commission. He was summoned after it was alleged that he had diverted nearly US $200 million in public funds — intended to support the country's electronic ID system — to politicians as bribes.

When his critics shamed him for failing to appear at a public hearing concerning his possible involvement in a financial scandal, his supporters on WhatsApp shared a photo of him lying on a hospital bed, in order to prove that his absence was legitimate.

Seen above, the photo shows Setya in the hospital, where he was admitted for complications related to diabetes and severe vertigo. But the photo soon found its way into a series of memes and online comments that were not so flattering to Setya. The photo went viral after Internet users photoshopped it to mock the House Speaker.

Below are some of the memes which poked fun at the Speaker:

All Those Setya Novanto Memes Are More Powerful Than You Think https://t.co/uiRD3InR3g pic.twitter.com/QNiCuQve0m

The Power of Setya Novanto

Public scrutiny is nothing new for Setya. 2015, Setya was forced to resign as House Speaker after being implicated in a corruption scandal involving a foreign mining firm. But he was never convicted, and thus later returned to his position in Congress.

Since his return to Congress, he has twice been summoned by the Corruption Eradication Commission (KPK) for his alleged role in the government’s electronic identity cards (e-KTP) program after it was exposed that half of the 375 million US dollars allocated for it were diverted to politicians as bribes.

In late September 2017, a local court removed Setya as a suspect in the e-KTP graft case on a technicality. That he was able to clear his name in the pretrial stage of the e-KTP case has only further boosted his reputation as a powerful politician.

His resilience and ability to maintain popularity despite allegations of corruption have made him a popular subject for online commentary and humor.  Using the hashtag #ThePowerOfSetnov, Indonesians often hold up Setya as an example of the country’s politics. Below are some of the posts that used the hashtag:

Setya Novanto eats at a restaurant, when he asks for the bill the server gives him a tip

If Setya Novanto gets ticketed, it’s the police that go to trial

One day SetyaNovanto missed two days in a row in the school. Later on, these days were called Saturday and Sunday.#ThePowerOfSetnov

To add our own riff on #ThePowerOfSetNov meme: The only person who could successfully prosecute Setya Novanto… is Setya Novanto.

Setya strikes back, with defamation charges

When his photo first went viral and the hashtag #ThePowerOfSetNov trended on social media, Setya did not react.

It was only this week that Setya’s lawyers were reported to have filed a defamation case against Dyann and other individuals on October 10, 2017.

Dyann admitted that she shared a Setya meme but only for fun. She also said that she is a member of the Indonesian Solidarity Party, a political party whose platform is mainly to combat corruption. The police did not explain why they arrested Dyann first and not the other suspects, nor did they say anything about making further arrests related to the issue.

Dyann’s brief detention was denounced by activists and media freedom advocates. They pointed out that satire and the spreading of humorous memes should not be criminalized. They added that sharing Setya memes became popular because many ordinary Indonesians felt it was the only way they could exact accountability from public officials after the court rejected the corruption case against the House Speaker.

The issue also highlighted the campaign for the reform or scrapping of the ITE law, which many groups describe as repressive because of overly broad provisions on defamation that authorities often invoke to harass critics and silence the media.

This brief quote from Coconuts news website summed up the sentiment of many when Dyann was arrested by the police:

What does it say about the state of justice in Indonesia when a politician like Setya can continue to act the way he does with impunity, while somebody who spreads a meme about him gets arrested?

China  14 May 2022
END_OF_DOCUMENT_TOKEN_TO_BE_REPLACED
Cancel this reply