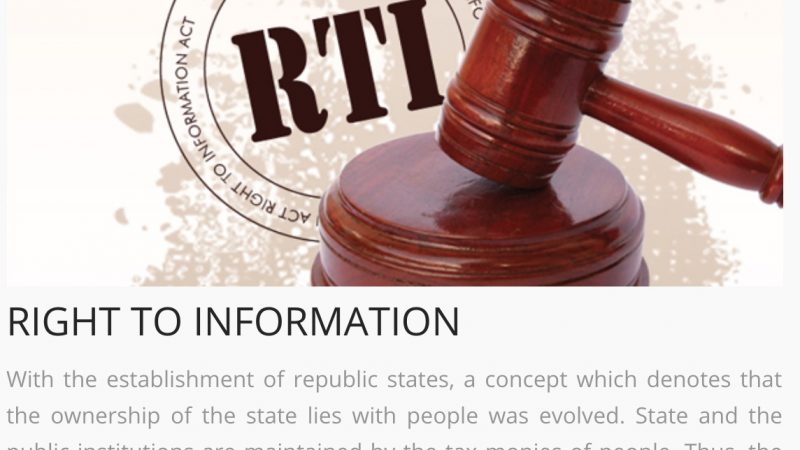 Screenshot from the Right to Information website in Sri Lanka.

This post by Raisa Wickrematunge [2] originally appeared on Groundviews, an award-winning citizen journalism website in Sri Lanka. An edited version is published below as part of a content-sharing agreement with Global Voices.

On November 8 news began to spread that independent news website LankaeNews [3] had been blocked across all Internet Service Providers (ISPs) in Sri Lanka [4]. Subsequently, a few online websites filed a request for information under the Right To Information (RTI) Act [1] of Sri Lanka in order to gain more information and shocking details emerged about the process of blocking of news websites.

Over the years, LankaNews has been mired in controversy. In 2016, a lawyer filed 14 contempt of court charges [5] against its editor. The blocking is chillingly reminiscent of 2010, when the site was blocked [6] before the release Presidential election results, and blocked again in 2011 [7], along with several others, including Groundviews and Transparency International. At the time, the Sri Lanka Telecommunications Regulatory Commission (TRC) denied [8] that the sites were blocked.

Given that the government of the previous president Mahinda Rajapaksa [9] regularly and arbitrarily blocked websites critical of its policies, this was a cause for concern as Sri Lanka has a new democratic government since 2015. Groundviews [10] and its sister websites Vikalpa [11] and Maatram [12] filed requests as per the RTI Act in order to get more information about the blocking process.

Groundviews submitted the following requests to the Telecommunications Regulatory Commission (TRC) of Sri Lanka on November 10:

Maatram [13], a sister Tamil language website of Groundviews, filed a similar request three days later, on November 13, and faced numerous difficulties [14]. The TRC asked Maatram to submit their request in English or Sinhala and admitted it would have to outsource translation of the request, as they were not equipped to process it. In fact, the TRC said this was the first RTI request they had received in Tamil, which is one of the two official languages [15] in Sri Lanka, besides Sinhalese.

Vikalpa, the sister website which publishes content in Sinhala, also lodged RTI applications with the TRC. However, both Vikalpa and Maatram's requests were rejected on grounds of national security. This was particularly odd given that President’s counsel, Hemantha Warnakulasuriya, defended the block on national television, in his capacity as a member of the TRC, as an article in the online publication The Island [16] revealed.

The TRC releases list of blocked websites and articles

The TRC did respond to Groundviews on November 28, noting that first request was “not in their possession, custody, or control.” Requests three, four and five were rejected on the grounds that it would undermine the defense of the State or national security.

The information released by the TRC revealed that 13 websites had been blocked from 2015. The websites included political news and pornographic material. 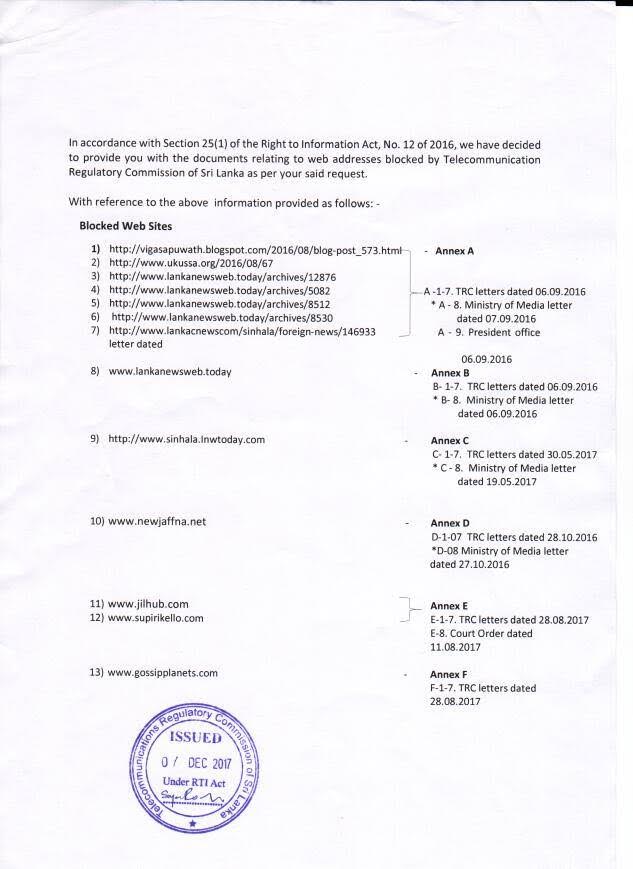 List of blocked websites, according to the Sri Lankan Telecom Regulatory Commission. Image via Groundviews.

The supporting documentation provided showed the process behind the blocking of each of the websites named in the letter.

While it was the Media Ministry who issued the final order to the TRC, the initial order came directly from as high up as the Presidential Secretariat, for at least four of the websites. 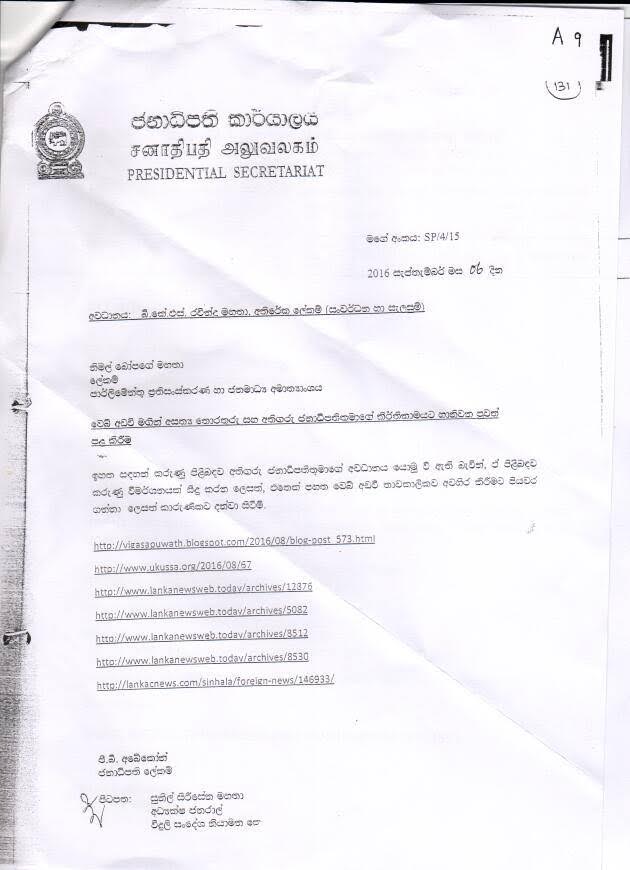 Letter from the Presidential Secretariat. Image via Groundviews

This letter, signed by then Presidential Secretary P B Abeykoon, notes that the listed websites have reached the president’s attention. Some of the Uniform Resource Locators (URLs) flagged clearly link to specific articles rather than an entire website.

Following this step, the Ministry of Parliamentary Reforms and Mass Media wrote a letter signed by the former Ministry Secretary Nimal Bopage to the TRC.

The TRC, in turn, sent a letter out to the CEOs of all the major internet service providers. 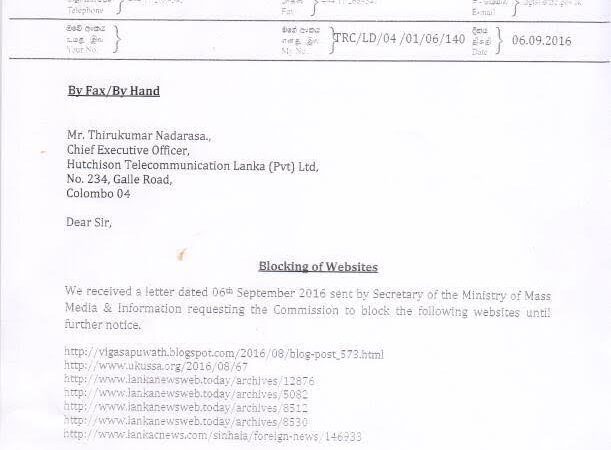 This identical letter was sent to the CEOs of Mobile phone providers Mobitel, Dialog, Etisalat, Airtel, and LankaBell. Image via Groundviews 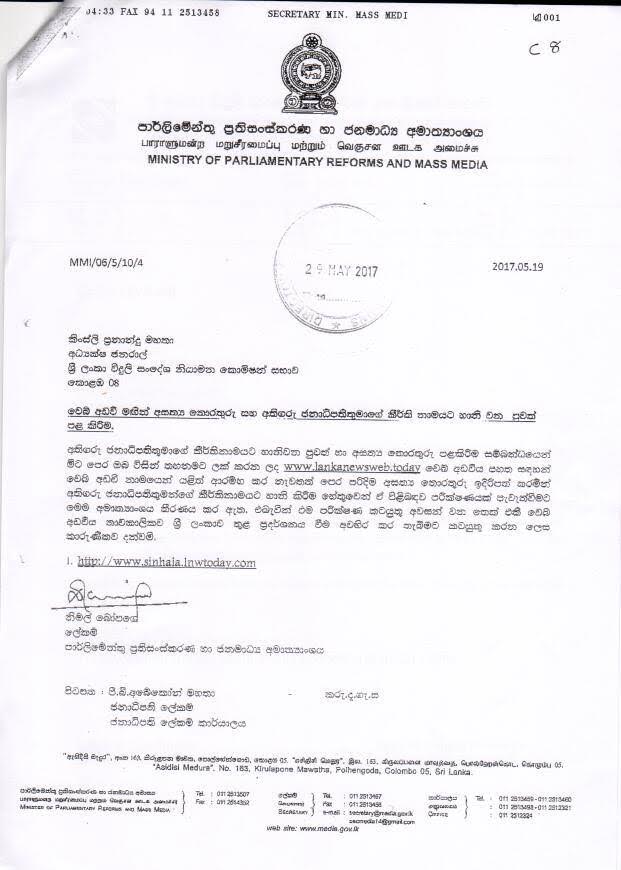 The website newjaffna.net was blocked for making defamatory comments about judges in Jaffna. Two of the flagged websites published pornographic material and were blocked following an investigation by the Cyber Crimes Division [21].

There is no comprehensive law [22] regulating Internet access, nor promoting it as a medium for free expression (though there are several laws  [22]including the Computer Crimes Act, the Sri Lanka Telecommunications Act, the Information & Communication Technology Act and the Electronic Transactions Act which addresses various issues around the usage of the Internet.)

There have been several attempts to regulate or impinge on free expression online in Sri Lanka – from the Department of Government Information requiring news websites to register in 2011 [23], and again more recently in 2016 [24] – to the Ministry of Media and Information admitting that they had blocked six websites on grounds of ‘character assassination’ and ‘violation of privacy.’ [25]

The legality of TRC's website blocking has also been called into question under Section 53 of the Sri Lanka Telecommunications Act, 1991. Expat student and lawyer Gehan Gunatilleke tweets:

My reading of the Telecommunications Act is that the TRC has no power to block a transmission without invoking judicial proceedings or obtaining an order from the Minister. But I’m skeptical of the value of an RTI request. A writ is better.

The paper trail is clear and leads to the highest levels of the government. Activists in Sri Lanka feel this practice must be condemned as a barrier to media freedom and freedom of expression.