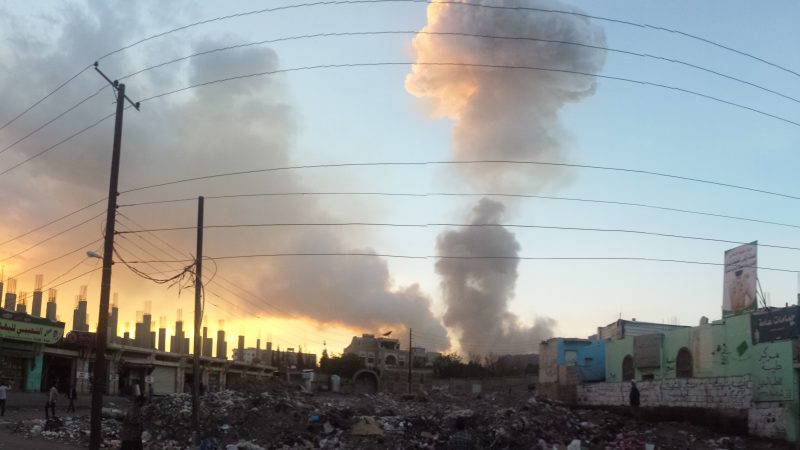 When she learned that violent clashes had broken out between Houthi rebels and forces loyal to Yemen's former President Ali Abdullah Saleh, a young woman named Amal tried to call home. She was outside of the country, at university, but knew the violence had occurred near her family's home in the capital, Sana'a.

She tried to reach her family using various mobile messaging apps, and was surprised when she did not hear back from them or see them connected on Facebook. She began to fear the worst until she successfully reached them on the phone by the end of the day.

Amal's experience, and many others like it, give a glimpse of how harmful internet service disruptions can be amid an armed conflict.

Nearly three years ago, Yemen plunged into an armed conflict, with Houthi rebels fighting [2] to seize power from the internationally-recognized government of President Abdrabbuh Mansour Hadi, who is is supported by a Saudi-led coalition. Forces loyal to former president Ali Abdullah Saleh (who was removed from power following street protests in 2011) had fought against the Houthis, until Saleh changed his position and called for dialogue with Saudi Arabia. On 4 December, 2017, the Houthis killed [3] Saleh.

Some days after the clashes between the Houthis and forces loyal to Saleh ended, internet users were caught off guard by a 30-minute internet shutdown, on 7 December between 10:30pm and 11:00pm local time.

Internet in #Yemen [4] suffered multiple national outages in past hour as civil war shows no signs of cessation. YemenNet (AS30873) completely offline for ~30 minutes. pic.twitter.com/8wVRHQj77R [5]

Internet service was later restored, but at the same time Facebook (one of the most popular sites in Yemen, according to the web traffic data and analytics service Alexa [7]), Twitter and the instant messaging applications WhatsApp, IMO and Telegram (which was previously blocked in 2016 before access to it was restored in early 2017) were blocked. Websites of news organizations affiliated with former president Saleh and the political party he founded, the General People's Congress, were also blocked.

These blockages occurred at the hands of the Houthis, who hold control of the capital, Sana'a, and have taken control of the Ministry of Communications and Information Technology. The Ministry controls Yemen's DNS servers and the country's sole internet service provider, YemenNet.

Six days later, on 13 December, YemenNet lifted the ban on social media platforms and messaging apps, though internet speed continued to be significantly slower than normal.

The slowest internet speed in the world

Yemen already has the lowest internet speed in the world according to Akamai, a US-based content delivery network and cloud services provider. Akamai's fourth quarter report [8] for 2016 concluded that “despite posting an 85% quarterly increase to 1.3 Mbps [megabytes per second], Yemen remained the qualifying country with the lowest average connection.”

In July 2016, the United Nations Human Rights Council adopted a historic resolution [9] condemning internet shutdowns as a violation of human rights. In a state of war, internet and communication platform outages can put basic rights at even greater risk.

“The availability of internet access during armed conflicts is more important than in normal circumstances,” Fahmi Al-Baheth, president of the Yemeni chapter of the Internet Society (ISOC), said. He continued:

During armed conflicts, people use the internet to learn about the situation surrounding them, stay updated about the latest developments in relation to their security situation, communicate with others and check on them or to request assistance and urgent media care.

According to a test [10] conducted on 18 December using the internet speed testing service Fast.com, Yemen's internet was operating at a download speed of 130 kilobytes per second (0.13 megabytes per second). This is ten times slower than its average speed, which is already slow. Intentionally slowing internet speed is among the measures employed by regimes to repress the digital rights of users.

Al-Baheth added that ending YemenNet's monopoly over the provision of internet services would be one solution to address the current issues related to internet access in Yemen.

A report from the Beirut internet rights group SMEX elaborated further on the situation:

Before Thursday's shutdown, the Houthis had also been throttling, or intentionally slowing, internet speeds across the country, according to several online sources [11] who complained [12] that the internet has been particularly slow. Walid al-Saqaf, co-founder and chairman ISOC-Yemen, told SMEX that YemenNet regularly throttles the internet and that this practice continued during these two disruptions.

“Slow speed interferes with the effective use of the internet to communicate: for example, when a user needs to invest fifteen minutes or sometimes even more of his/her time to send a basic email with attachments, or when it becomes impossible to use YouTube to disseminate news,” said Amr Mostafa, program coordinator at the Yemeni Organization for Development and Technology Exchange [13]. “Such tasks become a privilege, unavailable to most internet users in Yemen.”

Recently, Yemeni internet users have been trying to find internet circumvention tools [14] to bypass censorship. Some are using virtual private networks [15] (VPNs) to communicate and exchange news with their families and friends inside and outside Yemen, even though these tools can sometimes slow down their internet speed. A number of users started using the secure messaging app Signal [16], since it was not among the blocked apps.

Users who wish to identify or report on censorship of specific platforms or websites can use OONI [17], a free software project and app powered by Tor “which aims to empower decentralized efforts in increasing transparency of internet censorship around the world.”

A history of restricting online speech

Yemeni authorities have a long history of violations against freedom of expression and opinion, and the right to access information. Such violations date back to the rule of former president Saleh, when the government started blocking websites affiliated with the opposition from 2005 until 2011. In 2012 the ban on all websites was lifted. However, with the start of the latest war in 2015, the Houthis who control the capital, where DNS servers are located, blocked [18] access to several Yemeni and regional news websites that oppose their policies. In May 2016, they blocked [19] Telegram and Instagram for several months, and in October of the same year WhatsApp was blocked [20] for several days.

The internet was first made available for public use in Yemen in 1996 through YemenNet, a company affiliated with the (Houthi-controlled) Ministry of Telecommunication and Information Technology, which is still the only service provider in the country. According to the Public Telecommunication Corporation [21] (the government-owned company which manages the fixed-line and mobile networks), there were 4.2 million internet users in Yemen by the end of 2015. According to Internet Live Stats [22], that number increased to reach 6,773,228 users in June 2016, that is 24.7% of the population.

Currently, the internationally-recognized Hadi government, which is based in the Governorate of Aden, is seeking to separate the areas it controls by establishing DNS servers in Aden and connecting the province through an international submarine cable. If successful, this measure could end [23] the Houthis’ monopoly over the telecommunication sector. This may result in an end to censorship and increased internet speeds in the areas under the control of Hadi's government, unless it also chooses to practice censorship and surveillance, and to slow down the internet.

An Arabic version of this article was first published [24] on the Arabic blog of Mada19 on 20 December. Global Voices re-published and edited the article at the request of its author, Bahseer Alsamawi, a Yemeni activist who documents rights violations committed against civilians during the ongoing war.