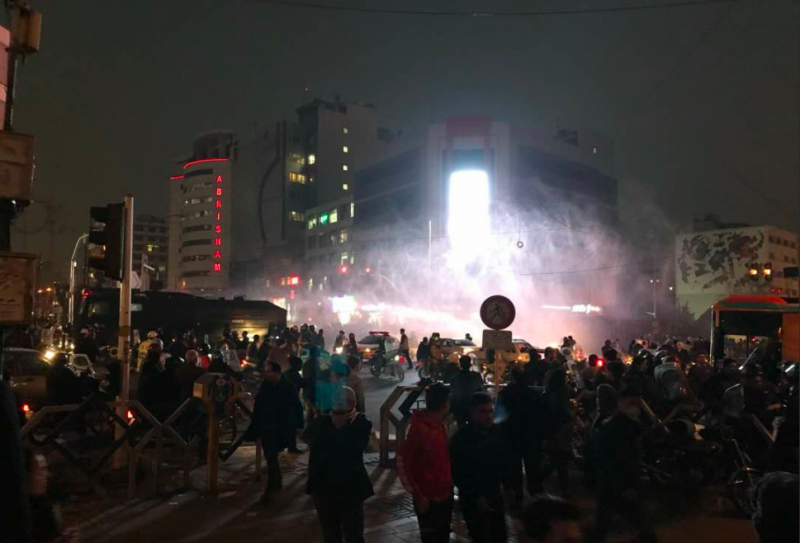 The original version of this article first appeared on the website for Center for Human Rights in Iran. This version is published here as part of a content-sharing agreement.

For the first time since the mass protests of 2009, the Islamic Republic of Iran has imposed severe restrictions on internet access, curbing the distribution of images, videos and reports about the nationwide protests that began on December 28, 2017.

The Center for Human Rights in Iran (CHRI) has learned that internet access in Iran was severely disrupted on December 30 and at one point completely cut off for half an hour. A day later, Telegram and Instagram, two of the country’s most widely used social media applications, were blocked.

“We have been ordered to interrupt international traffic,” a source at an Iranian internet exchange point (IXP) told CHRI on December 31. The source requested anonymity for security reasons.

An internet exchange point is the physical infrastructure through which internet service providers (ISPs) exchange internet traffic between networks. Without this technology in place, it is difficult for internet users to access websites hosted in other countries.

“Every other international data packet is being bumped off the network, which creates widespread disruption,” said the source.

The source refused to identify the state authority that issued the order. However, on December 31, the semi-official Iranian Labor News Agency (ILNA) quoted a “knowledgeable source” saying that the order to disrupt mobile communications had come from “higher officials in one of the security agencies.”

On December 28, reformist news site Jame Farda reported that the decision was made by the Supreme National Security Council, which is heavily influenced by Supreme Leader Ali Khamenei, who appoints the council’s individual members.

“In response to a question from our IT reporter about the authority behind the recent filtering, Telecommunications Minister [Mohammad Javad] Azari Jahromi said the decision was made by the Supreme National Security Council and is temporary,” said the report.

On January 1, 2018, users who tried to access sites with servers based outside Iran found themselves blocked from going online for 30 minutes. While that restriction has been removed, internet users are still facing extreme difficulties trying to access foreign websites.

Circumvention tools such as virtual private networks (VPNs), which enable users to bypass state filters, are also faltering, with many working for just 10 minutes and then suddenly breaking down.

Tor, a free software that enables users to access the internet anonymously—one of the few foreign sites still accessible by Iranians—reported up to 10,000 direct connections from Iran on January 2, a number well above Iran's average of 6,000 connections.

‘Is this the National Internet?’

While connections to foreign websites have ranged from difficult to impossible to reach, domestic traffic on Iran's  National Information Network (NIN) experienced no disruptions.

Iran launched the first phase of its domestic internet in 2016. The NIN, which divides internet traffic into the categories of foreign and domestic, was created to encourage citizens to access state-approved domestic sites by offering lower usage prices and faster speeds.

In a total infringement of the rights of access to information and internet access, the NIN also gives the state the power to interrupt or block access to the worldwide web and direct all traffic to domestic destinations.

Over the past week, users have reported no problems accessing the supreme leader’s official website, www.khamenei.ir, and state-funded news outlets like the Iranian Students News Agency. But users who tried to access websites and apps with servers based outside Iran, like Wikipedia or Instagram, were not so lucky.

On December 30, Iranian Android developer Ali Borhani estimated that the fail rate of international communications from Iran had reached “more than 20-30 percent.”

Another Iranian using the alias Lord Farhad tweeted on December 30, “My internet traffic [Tehran Telecom ADSL] reverts to a fake 8.8.8.8 Google DNS server. Use a free but reliable VPN, even if the speed is terrible… Be careful.”

Iranian tech writer Sonita Sarabpour‏ tweeted on December 31, “Mahmoud Vaezi, [President Hassan] Rouhani’s former telecommunications minister and current chief of staff, had pledged not to cut off the internet because of elections or any other reason. But last night it happened and all the internet operators are saying that it is not their fault.”

When the internet was cut off in 2009 to block people from uploading images of protests against the outcome of that year’s presidential election, few relied on the network for business. This time it has affected the operations and revenues of many online firms.

Some Iranians who were able to access their Twitter accounts this past week posted complaints about the difficulties of getting online.

It’s terrible. Websites hardly open. Most circumvention tools have stopped functioning and those that work are very slow. Only domestic sites open fast.

“For the past few minutes my connection with [ISP] Asiatech only lets me open domestic sites. I tweeted this with my Irancell account,” tweeted Behrouz Khezry.

My Asiatech account also cuts off and only open Iranian sites. After a few kicks and punches, I was only able to connect with Lantern [VPN]. Also, no connections possible with Psiphon or Hotspot [VPNs].

Hamrahe Aval and Irancell connections are completely cut off. Pars Online’s ADSL service cuts off intermittently. It opens some domestic sites but not Google, for example. The only circumvention tool that barely worked was Psiphon. Tor did not work either.

Until a few moments ago my circumvention tool was not working on my mobile. Also I could not open sites like Google and Yahoo with my home internet. But I could open Digikala and Parsijoo. Is this the national internet?

The Telegram messaging app, which is used by a reported 40 million Iranians and which has refused to base its servers inside Iran, has also been completely blocked since December 31. The company suspended the account of AmadNews, an opposition news site that reportedly encouraged people to use Molotov cocktails in protests. Telegram CEO Pavel Durov said this violated Telegram's rules, though he did not cite specific rules that make this stipulation

However, the latest version of the channel, renamed as Sedaie Mardom [People’s Voice], has received Telegram’s approval and is now online.

I see it as a big win for @telegram. The creators of Amadnews informed us they dismissed the admin who violated our “no violence” rule, promising to comply with our ToS in the future. That’s all we ever wanted to hear from them.

Durov speculated that authorities were blocking access to Telegram because the company publicly refused to shut down Sedaiemardom and “other peacefully protesting channels.”

On January 1, many people in Iran received a message from Twitter asking them to change their passwords. It is not clear what prompted the message.

Nevertheless, many Iranians were unable to reactivate their Twitter accounts after trying to change their passwords because Twitter validates users by sending them a code in a phone text message. However, due to US sanctions, Iran is not listed on Twitter’s phone country code menu, meaning that the app was unable to contact its Iranian users with the verification code.

David Kaye, the UN’s special rapporteur on freedom of opinion and expression, urged Twitter to solve the problem:

is there a way to fix this, @TwitterSupport? seems important for individual access during #IranProtests https://t.co/8HwFMzWtG3

Government control over the internet: rhetoric vs. practice

Since the rise of social media in Iran in 2009, hardliners in government have consistently cracked down on popular apps ahead of elections.

The Rouhani administration has repeatedly called for less governmental control over the internet, which is heavily restricted and censored in Iran but has been silent on the disruption of the internet during the protests of 2017.

In 2009, fewer people in Iran relied on the internet for their business operations, so when the government cut off internet access that year after hundreds of thousands took to the streets to dispute the result of that year’s election, companies weren’t as negatively impacted as they were in December 2017.

Compared to previous occasions, this time the interruption in online services has adversely affected the livelihood of many people, including 150,000 taxi drivers in Tehran.

Some 53 percent of Iran’s 80 million people had access to the internet in 2016, according to the UN’s International Telecommunication Union (ITU).

The development of the internet was one of the most important reasons I voted for Hassan Rouhani. I may not be sorry for voting for him for economic reasons, but I sure am for not preventing the blocking of the internet.

The state-run Islamic Republic Iran Broadcasting (IRIB) service reported on December 31 that the decision to restrict access to Telegram and Instagram had been made “to preserve the peace and security of citizens.”

During a news briefing in Tehran on December 31, Deputy Interior Minister for Political Affairs Esmail Jabbarzadeh said, “When there is a disruption in public order, naturally the government must take temporary measures to limit access to social media.”