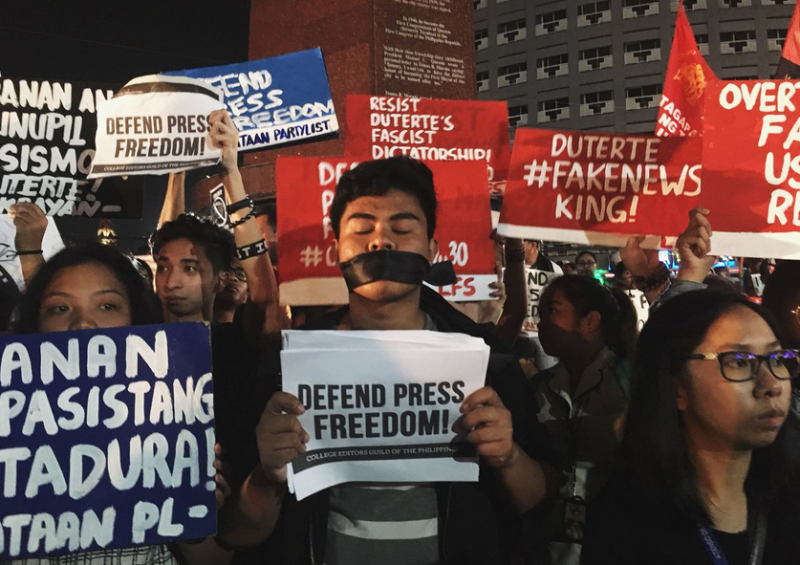 On January 11, the Securities and Exchange Commission cancelled the company’s license to operate as a business, claiming that it has violated rules against foreign ownership of media companies.

Although Rappler has received some financial support the US-based Omidyar Network, it is fully is owned and operated by Filipinos who reside in the Philippines. Nevertheless, President Duterte insinuated in his July 2017 State of the Nation Address that Rappler is “fully owned by Americans.”

Protests at Timog and Katipunan erupted today as a sign of protest against the attacks of the government on press freedom. #DefendPressFreedom pic.twitter.com/abPdGmuueM

On the same week the SEC revoked Rappler's license, the country's National Bureau of Investigation also summoned company CEO Maria Ressa, along with a reporter and one of the company's corporate owners. The investigation is the result of a claim by businessman Wilfredo Keng, who alleges that Rappler committed “cyber libel” in a 2012 article that showed evidence that Keng had been involved in human trafficking and drug smuggling. Rappler has vowed to challenge these claims against the company.

On January 19, Filipino bloggers collectively wrote and signed a statement expressing their commitment to freedom of expression, and their solidarity with Rappler. Initiated by Mom Blogger Noemi Dado, the statement is part of an outpouring of support by Filipino social media users and netizens for Rappler and in defense of press freedom.

More bloggers are invited to join the signatories by signing up at http://bit.ly/bloggersforfreedom. Here is the statement's text and initial signatories:

We concerned Filipino bloggers stand for the rights to free expression and to free speech. And our first responsibility is to protect these rights.

We stand against moves to silence and scare journalists, bloggers and media practitioners just because the President and his ardent supporters dislike their news and views.

Now is a time for making choices amid battles between truth and lies, debate and dissonance, democracy and dictatorship.

We sign our names here to tell everyone we have made a choice. We are bloggers for freedom.