#MeToo Has Hit China's Universities, Despite Efforts of Internet Censors 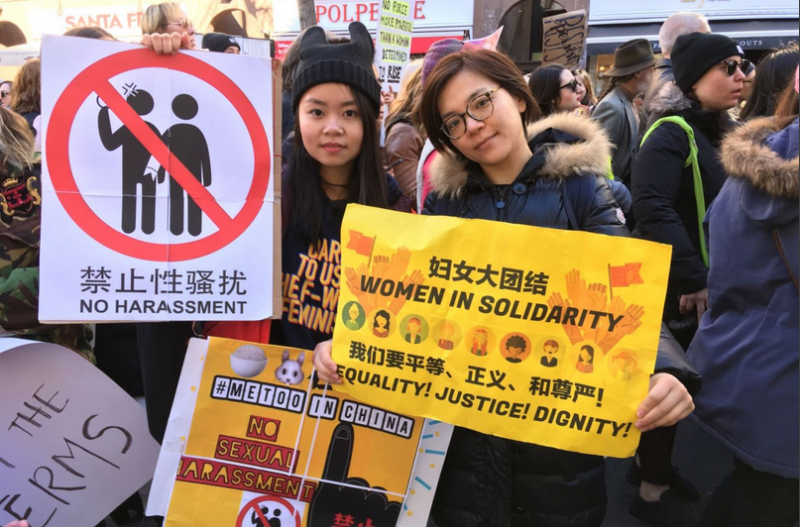 The global #MeToo movement is slowly catching on in China, despite strict censorship on the internet.

After highly-regarded Beihang University professor Chen Xiaowu was dismissed over multiple allegations of sexual misconduct, students and alumni from dozens of top universities have launched online petitions demanding that school administrators establish official policies against sexual misconduct, which are all but non-existent in Chinese universities. The initiative has its own hashtag, #EveryoneIn.

Following more than a dozen sexual misconduct allegations against American film producer Harvey Weinstein in October 2017, the #MeToo campaign and hashtag became a global social movement to raise public awareness of sexual assault and harassment. Since that time, women from all over the world have been sharing their own experiences online using the #MeToo hashtag.

The movement has also spread to mainland China but was difficult to see online, thanks to China's aggressive internet censorship regime. Activists say that phrases like “anti-sexual harassment” were targeted and censored on social media.

But this began to shift when the story of Luo Qianqian, a former student at Beihang University in Beijing, went viral.

Luo, who is now living in the US, published an essay in which she described how Chen Xiaowu lured her to his sister’s home and forced himself upon her twelve years ago, during her post-graduate study. Although she was able to escape, she later learned that another student had been lured by Chen and had become pregnant as a result.

Luo’s account went viral overnight. Censors responded quickly, but could not contain the response when five other Beihang students came forward and made similar sexual misconduct allegations against Chen.

Upon investigation, Beihang University decided to dismiss Chen, who at the time had served as vice president of the university's graduate studies program. The Ministry of Education also stripped Chen of his academic title as “Yangtze River Scholar”.

The decision was widely reported and discussed on Chinese social media platform Weibo.

A Beihang student commented in one of the Weibo news threads about this disciplinary action, noting that it was long overdue:

As a Beihang student, I can only say the school is regretfully slow in responding to the sexual misconduct. The case had been reported before. It was revealed on Zhifu (an online platform), but the post was deleted and the victim was threatened. The expose was repressed. A similar [sexual harassment] case happened in Beijing Posts and Telecommunications University, which is 1km away from Beihang. There wasn’t any follow-up. People are disappointed with the government’s inaction. More and more elites are leaving the country. Can we still see hope in this country in the long run?

Feminist activists consider the result a small victory, warning that on-campus sexual harassment is endemic in China and that universities still do not have concrete policies addressing the problem.

Wei Tingting, a feminist activist who was arrested by police for organizing an anti-sexual harassment action on March 8 Women's Day in 2015, conducted a nationwide survey on university campus sexual harassment in September 2017. Among the 6592 respondents, nearly 70 percent had encountered different forms of sexual harassment.

Many agreed that Chen Xiaowu’s sexual misconduct is just the tip of the iceberg:

When you see a cockroach in the middle of the living room, you can find usually find a whole colony of them in the corner

China’s education sector is such a mess — from kindergarten to university, the environment is not safe. And the problem is addressed with either repression or a clean-up show.

Some pointed out that it is a reflection of systematic power abuse in the society. One user wrote:

In a society driven by “desire and thirst”, how can people resist such temptations? Especially for those who hold positions of public authority, they use their positions to lure women. For the sake of survival, women have to be submissive, willingly or unwillingly.

To address the problem of systematic power abuse, students, alumni and teachers from several universities including Beijing University, Fudan University and Wuhan University have made public appeals to school authorities to introduce a set of monitoring and disciplinary measures to prevent campus sexual harassment.

In addition, more than 50 professors from universities across the country signed a declaration on January 19 urging the Ministry of Education to address school and university campus sexual harassment with a concrete policy. The professors suggested that offenders should be prosecuted in court. They also pledged to report on sexual harassment and protect victims.

Feminists like Wei Tingting are using this moment to push for more public pressure:

Luo Qianqian is just a single case, there are many mang “Luo Qianqians”… it takes twelve years for this Luo Qianqian [to tell her story], while other Luo Qianqians remain invisible.
Some say that this is China’s campus version of the Me Too movement. I want to stress that the Me Too campaign is inadequate, we need everyone in.
Not only the victims should stand up and tell their Me Too stories, we need others (female and male) to take action and say “I’m in”.
Me Too will only address the story-telling part. After the stories are told, we need more “I’m in” to follow up with action.

Wei launched a crowdfunding campaign with a plan:

1. Send a copy of the survey report and a set of policy suggestions to the 211 universities that participated in the survey.
2. Support the salary for a coordinator who will maintain a [national anti-sexual harassment] network.
3. Recruit more people into the network.

Meanwhile, some are worried that the current #MeToo campaign in China will face another round of online crackdowns. In 2015, five feminist activists were arrested for speaking out against sexual harassment ahead of March 8 International Women’s day.

According to a report from New York Times, in addition to censoring a public appeal calling for a campus sexual harassment policy, activists were warned by authorities that their action could be viewed as colluding with foreign forces and betraying the country. Feminists and allies of the movement in China are bracing themselves for more censorship, as International Women's day approaches.

Colombia  14 May 2022
END_OF_DOCUMENT_TOKEN_TO_BE_REPLACED
Cancel this reply