How many times must a hypothetical aunt of a government minister travel from Canada to Serbia in order to transfer 205,000 euros in cash?

Serbian law says that one can only enter the country with less than 10,000 euros in cash. Yet according to Serbian authorities, the answer to this seemingly simple mathematical problem is not  “at least 21 times”, but a very forceful nothing to see here!

Inquiring Serbian minds want to know, after years of controversy surrounding Defense Minister Aleksandar Vulin, his 2012 purchase of a spacious 205,000 euros apartment in Belgrade, and his claim that the money came from his wife's aunt in Canada. By law, public officials in Serbia must account for all funds they receive while in office.

In September 2017, the Crime and Corruption Reporting Network (KRIK) — an independent Serbian media outlet — revealed that Minister Vulin didn't produce evidence of the source of 205,000 euros (over 242,000 US dollars). He first claimed that he got the money by selling other real estate properties (worth only 38,000 euros), but then backtracked and said that the money came from his wife's aunt.

According to Serbian law, a maximum of 10,000 euros in cash can be brought into the country without being declared at customs; anything over that amount is a crime. So, hypothetically, Vulin's generous aunt had to make more than 21 round-trips between Canada and Serbia to transfer those 205,000 euros. Thus far, there is no evidence of any such trips being made.

The Anti-Corruption Agency of the Republic of Serbia in fact confirmed that Vulin had not produced evidence of the source of the money, but the agency didn't disclose this information publicly until KRIK filed a request under Serbia's Freedom of Information Law. The Agency first denied the request, but then released it after the Commissioner for Information of Public Importance ordered it, acting upon KRIK's complaint.

Meanwhile, the Agency forwarded the results of its investigation to the Public Prosecutor's Office for Organized Crime, filing a criminal complaint because public officials must account for all funds they receive while in office. After two years of deliberation, the Public Prosecutor's Office dropped the case in August 2017, claiming that the act allegedly committed by Vulin falls outside of its jurisdiction. Two other prosecutor's offices also reviewed the case and dropped it too.

A caricature of the ‘saintly’ alleged aunt of Serbian Minister of Defence Aleksandar Vulin, by KRIK.RS. Used with permission.

First the Basic Prosecutors Office, then the Higher Prosecutors Office, and now the Prosecutors Office for Organized Crime conducted investigations without questioning either the minister or his aunt, who allegedly lent him a large sum of money to buy real estate. All three prosecutors concluded that Vulin didn't break the law when he filed an official report with inaccurate data declaring his property, which is a requirement of Serbia's transparency and accountability legislation. Instead, they rationalized it as “a possible mishap” or “imprecision” on the part of the minister.

Witch-hunt against journalists who are demanding accountability

From as far back as 2013, Aleksandar Vulin has served at several ministerial posts within the Serbian government. After the KRIK story came out, his party — the Movement of Socialists (part of a right-wing coalition led by the Serbian Progressive Party, a member of the European People's Party) — issued a communique intended to insult, defame and discredit journalists who had written about the accountability of public officials in the country.

In Serbia, such libelous articles do not beat around the bush; rather, they directly attack the dignity of the target. In this case, the target was KRIK editor Stevan Dojčinović. The Movement of Socialists published an announcement in September 2017 (widely shared by Serbian mainstream media) that portrayed as a sadomasochistic ‘junkie who hates Serbia’:

What does Dojčinović actually do, except practice his curious habits of hanging from ceilings and piercing his nipples with needles to inflict bodily harm upon himself? It is not a secret that Dojčinović is paid from abroad for every text attacking Vulin, and it's not a secret that he uses narcotics. If he would like to issue a denial, we demand that he produces all his evidence first, and in particular, undergo a drug test. We can already tell you he won't dare do it. Junkies usually don't. And under the influence, they often put their fantasies into words…

The Movement of Socialists soon amended the announcement, which said that the journalist “immensely hates” everyone who, like Vulin, loves Serbia, and replaced it with another statement, more vulgar in tone, which repeated the allegations about drug abuse and concluded, “We sincerely hope that you cure yourself, but we know that that's impossible in your case.”

Dojčinović responded by filing libel lawsuit against the Movement of Socialists. The co-ruling political party denied they called him a junkie, saying they merely asked that such allegations be examined.

“We'll be happy if investigation proves that this young man hasn't used narcotics,” was their response.

Some media outlets which had published the original announcement subsequently removed their articles about it.

Alongside finding themselves as the target of defamation campaigns and threats, KRIK editors and reporters, along with other investigative journalists, have increasingly been subject to malicious libel lawsuits by politicians, draining their already limited resources. For instance, another government minister, Nenad Popović, filed four lawsuits against KRIK after it revealed that he was named in the leaked Paradise Papers.

‘Emotional reactions’ by politicians and citizens

When asked about the announcements made by her coalition partner, Serbian Prime Minister Ana Brnabic called them “an emotional reaction”, claiming that these “statements” are not those of Minister Vulin, but rather, announcements of a political party. She described the issue as a “clash” between a party and a media outlet, with no connection to the Government of Serbia. She did not acknowledge the direct connection between the party and Vulin, or the fact that the president of that party is a member of her government.

The prime minister added that she too had “an emotional reaction” to that media outlet, but she focused instead on producing statements that would be “tolerant and balanced”. Zora Drcelic, a journalist at Vreme, a weekly news magazine, commented that the prime minister has tried to put on an act, sending a message to citizens that they should not concern themselves with the “emotional reactions” of government officials who are challenged about their integrity in public office.

The term “emotional reaction” quickly become part of contemporary political jargon. Serbian citizens have been making the connection between this case and the overall decline of freedom of expression, including the closing down of local newspaper Novine Vranjske, which was edited by Vukašin Obradović:

Vukašin Obradović received threats that anything can happen to his daughter.
These were not pressures, as Brnabić would know, those were only emotional reactions.
#IStandWithVranjske

While most of the Serbian mainstream media have decided not to cover the affair of the alleged “aunt from Canada”, citizens using social networks support the efforts of investigative journalists, who are determined to keep following the story.

Netizens have been using the hashtag #TetkaIzKanade (#AuntFromCanada) to amplify the reach of new information, as well as to link the case with similar instances of suspected government corruption:

Some people say the authorities proved that Vulin's aunt exists. Further research would show that Vulin's aunt took the money from her aunt, who also has an aunt. At the end of the line stand Adam, Eve and God — so everything is investigated and proven, so what's not to understand??
#AuntFromCanada 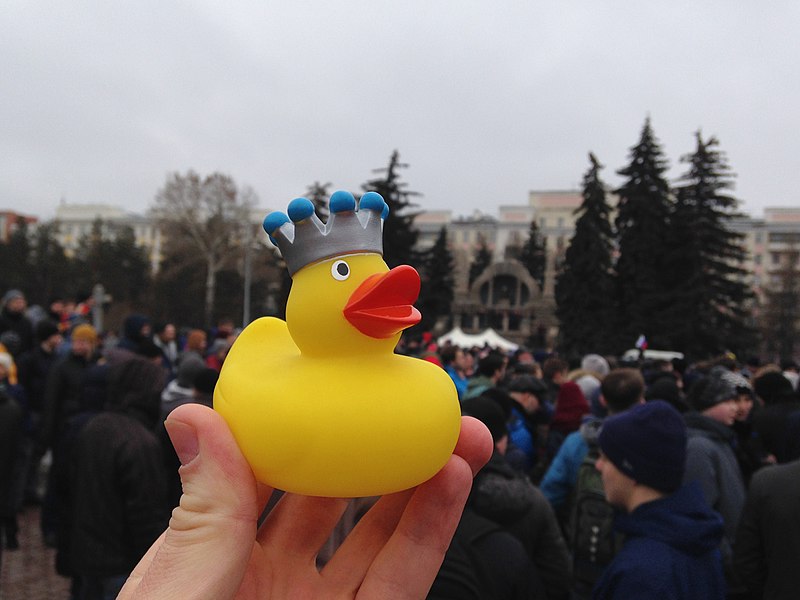 A yellow rubber duck at a protest in Russia. Photo by Daggets via Wikimedia Commons (CC BY-SA 4.0)

Another tweet brought up various unresolved abuses of power in recent years, including illegal demolition in the Savamala district to make room for a government construction project, a cover-up in the arrest of a state secretary's drug-dealing brother, and the case of right-wing politician Miša Vacić, who was threatening war against Albanians and silencing critics with promises to mobilize their children. His stance was subject to public ridicule, thanks in part to his large physical stature, which makes him unfit to serve in the security forces:

Maybe they'll discover who was destroying buildings in Savamala, who smuggled heroin from Kosovo in a car owned by the Ministry of Labor, who is the #AuntFromCanada, how to reduce the size of your belly before you get mobilized..?

Some Serbians immediately connected the aunt affair to the recent public appearance of Canadian Prime Minister Justin Trudeau, who wore purple socks adorned with a pattern of yellow ducklings at the World Economic Forum in Davos, Switzerland.

Since 2015, a giant yellow duck has become the symbol of the protest movement against government corruption in Serbia. Mocking conspiracy theories, some connected these two sets of ducks to draw a conclusion about the Canadian aunt as well:

Vulin should call his #AuntFromCanada so she would file a protest note to Canada in the name of Serbia…! This is such a Provocation..?! Canadian Prime Minister came to Davos to topple Vučić and destabilize Serbia..! 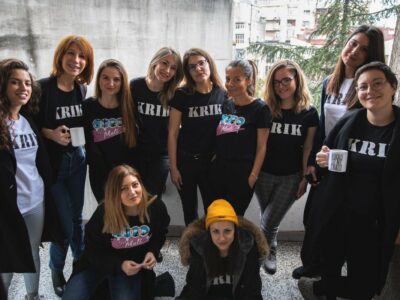 China  14 May 2022
END_OF_DOCUMENT_TOKEN_TO_BE_REPLACED
Cancel this reply