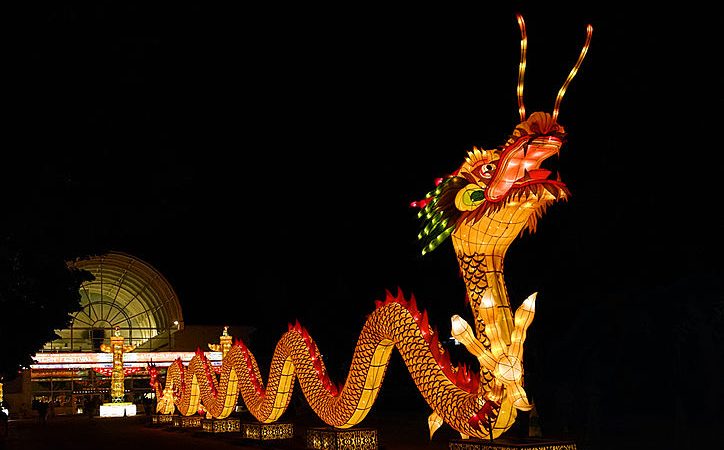 I love three things in this world.
Sun, Moon and You.
Sun for morning, Moon for night,
And you forever.

The above poem was circulated on one of my WeChat groups during the Lantern Festival on March 2, 2018, and was immediately viewed as a Lantern Riddle for people to decode. Everyone in the group knows that it is a mockery of the recent constitutional amendment proposal put forward by the Chinese Communist Party (CCP) regarding the abolition of the two-term limit on the state’s presidency.

Of course, no one posts the answer, knowing that it would trigger the webcensor. They just give a thumbs up. This Lantern riddle is just one of the many examples of Chinese netizens’ recent attempts to circumvent censorship on the constitutional amendment. Here's how: The answer to the riddle is a new term — “Xi forever” (習到永遠) — which, ever since the constitutional amendment proposal was made public on February 25, 2018, replaces the common expression of “Forever and ever” (直到永遠).

The announcement was made on February 25. The Central Committee of the CCP suggested deleting a line from the country's constitution which states that the president and vice-president “shall serve no more than two consecutive terms”. The proposal would pave the way for Chinese President Xi Jinping to rule indefinitely.

In order to stop people from commenting on and criticizing the abolition of two-term presidency limit, the Chinese webcensor has imposed a ridiculously long list of censored terms and expressions. China Digital Times has, thus far, recorded about 60 censored terms, which include the following:

Riddles have become a common way to avoid such traps. The lion's share of such clever wordplay is being circulated on chatrooms, although some netizens have dared to venture out to the public domain, using the most popular mainland Chinese question and answer platform, Zhihu, to outwit the webcensor. People believe that such courageous acts are what eventually led to a seven-day suspension of Zhihu’s app from all application stores.

According to the Cyberspace Administration's notice on March 2, 2018 (via China Digital Times):

Due to lax supervision and the spread of illegal information, the ‘Zhihu’ app is to be removed from app stores for seven days in accordance with relevant laws and regulations. Specifically, the suspension period begins at 15:00 today, and ends at 15:00 on March 9.

The notice did not specify what exactly the illegal information was, or why such a severe punishment was being imposed on a platform which had claimed loyalty to the CCP by setting up party branches in the company. Since the announcement was flagged as urgent during the Lantern Festival, some netizens pointed to one of the relevant question and answer threads:

Question: If the driver keeps going in spite of fatigue, without changing shifts, what should the passengers do?

This response, written with common expressions that appear in political propaganda, was the most “liked” of all the suggested answers:

Answer: In a crucial incident, we have to be determined and stick with the driver; this is a fundamental interest that has been proven through practice. The driver, without doubt, is the most capable person who is in control of the game. Position[ing] ourselves in the reality of anticipating the future, [the driver] would lead us to construct a safe and bright…

Though the link between the driver and Chinese president Xi Jinping is not a direct one, the majority of Chinese readers have managed to decode the riddle and have a good laugh about it. Of course, this sense of humor is not shared by the Cyberspace Administration.

In response to the suspension, Zhihu vowed that it would further strengthen its self-censorship measure. In fact, in the few days since the constitutional amendment proposal was announced, it has deleted more than 40,000 harmful bits of information and suspended 1,200 user accounts.

Nevertheless, the seven-day suspension notice indicates that even the self-censored loyalist has failed the expectations of the new era.