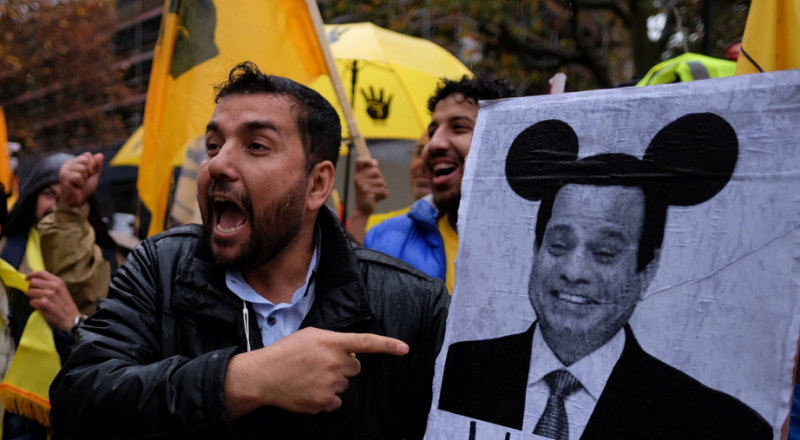 Protesters outside the Egyptian Embassy in London, 2015. A Facebook user who posted the featured image of President El-Sisi with superimposed Mickey Mouse ears was arrested and sentenced to three years in prison that same year. Photo by Alisdare Hickson via Flickr (CC BY-SA 2.0)

While the Egyptian government is notorious for censoring websites and platforms on national security grounds, there are no laws in force that explicitly dictate what is and is not permissible in the realm of online censorship. But if the draft law is approved, that will soon change.

Article 7 of the anti-cybercrime law would give investigative authorities the right to “order the censorship of websites” whenever “evidence arises that a website broadcasting from inside or outside the state has published any phrases, photos or films, or any promotional material or the like which constitute a crime, as set forth in this law, and poses a threat to national security or compromises national security or the national economy.” Orders issued under Article 7 would need to be approved by a judge within 72 hours of being filed.

Article 31 of the law holds internet service providers responsible for enacting court-approved censorship orders. ISP personnel that fail to comply with orders can face criminal punishment, including steep fines (a minimum of 3 million Egyptian pounds, or 170,000 US dollars) and even imprisonment, if it is determined that their refusal to comply with censorship orders “results in damage to national security or the death of one or more persons.”

In an interview with independent Cairo-based media outlet Mada Masr, Association of Freedom of Thought and Expression legal director Hassan al-Azhari argued that this would be impossible to prove in practice.

Writing for Access Now about the rising quantity of blocked websites in Egypt — which is now at 500, by popular count — Emna Sayadi points out that the law could contravene Egypt’s Constitution. She cites Article 57:

…the State undertakes to protect the right of citizens to use public means of communication in all its forms. It shall not ban, block or deprive citizens of such rights in an abusive manner and this shall be regulated by the law.

Authorities in Ethiopia arrested and detained Seyoum Teshome, author and publisher of the blog Ethiothinktank, on March 9. Teshome, who is a lecturer at Ambo University, had written critically about the government response to massive protests concerning land rights and other issues of public import. His whereabouts are currently unknown.

Officials in the Indonesian island of Bali have ordered internet service providers to block multiple online media and messaging platforms — including Facebook, YouTube, Netflix and WhatsApp — for the duration of Nyepi, the Balinese Hindu new year.

South Africans brace themselves for adoption of ‘internet censorship’ bill

On March 6, South Africa’s parliament approved a draft amendment to the country’s Films and Publications law, which extends the bill’s application to online space. Once in force, the amendment — colloquially known as the “internet censorship” bill — will allow the country’s Films and Publications Board to scrutinize and order censorship of online material, including user-generated content on social media platforms. The law will also re-classify online platforms like YouTube and Netflix as “content distributors” and require them to pay an annual fee.

The Feminist Voices account on Sina Weibo, one of China’s most popular social media platforms, received a notice on March 8 — International Women’s Day — saying it was suspended due to “irregularities”.

The account, which has more than 180,000 followers, had launched a campaign on March 6 asking users to post photos and a pledge to combat sexual harassment. Sina Weibo has told the account admin, Lu Pin, that it cannot be re-activated. She is appealing the decision.

After cameras caught reporter Liang Xiangyi rolling her eyes at a fellow reporter during a state press conference, footage of the interaction went viral on Chinese social media. In short order, Liang’s name was censored on Sina Weibo, and all state media houses received the following instructions from the government censor:

Urgent notice: all media personnel are prohibited from discussing the Two Sessions blue-clothed reporter incident on social media. Anything already posted must be deleted. Without exception, websites must not hype the episode.

A French cybersecurity researcher has been publicly reporting on vulnerabilities he has found in various websites that contain personal data from India’s national digital ID system, known as Aadhaar. This marks the latest in a long series of revelations about the system’s security flaws, which have led to massive leaks of sensitive citizen data. Public writing and advocacy about the flaws have also triggered condemnation from UIDAI, the government agency that administers Aadhaar.

Indian tech blog Medianama points out that this situation is a bit different, due in part to the fact that the researcher “is not under Indian jurisdiction and not intimidated by the typical tactics of the UIDAI in silencing reports of security issues.” UIDAI has nevertheless sought to discredit the researcher’s claims, mainly via Twitter.

On March 14, IP-based messaging service WhatsApp, which is owned by Facebook, signed an “undertaking” with UK Information Commissioner Elizabeth Denham, pledging not to share user data with any other “companies in the Facebook family” until it is able to do so in compliance with the EU General Data Protection Regulation, which will enter force in May 2018. Denham’s office had investigated the company after civil society groups and media cast doubt on the privacy implications of recent updates to WhatsApp’s Terms of Use.

At the 37th session of the UN Human Rights Council, the Ramallah-based NGO 7amleh and the Association for Progressive Communications issued a statement concerning rising censorship of Palestinian voices online:

Recent years have witnessed a sharp rise in attacks on the right to free speech and privacy online for Palestinians. Digital rights violations are perpetrated at the hands of all three governments: the Israeli government, the Palestinian Authority (PA) and the de-facto government of Hamas in Gaza. In addition, social media companies, whose policies have called into question their neutrality, are complying with Israel in censoring Palestinian voices.