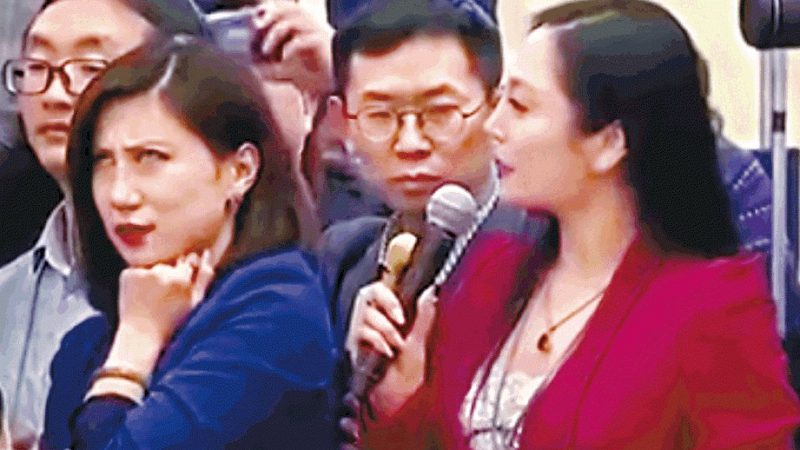 For the past two weeks, China's National People's Congress (NPC) has worked to abolish the country's two-term limit for the presidency.

In conjunction with this move, Chinese internet censors have imposed strict measures to stop netizens from commenting on the sweeping change to the constitution and thus maintain harmony — at least at a superficial level.

But that forced silence was broken with virtual laughter after live camera footage at a congressional press conference caught reporter Liang Xiangyi rolling her eyes and making a face at another reporter, Zhang Huijun, who had posed a long-winded question concerning China’s One Belt One Road project. The conference aired on the Nation’s Central Television on March 13, 2018.

Later, a chatroom conversation between Liang and another colleague was leaked online. In it, Liang said she thought “the woman next to me was being an idiot.”

What has been censored?

What actually has been censored? Here are some of the expressions on Weibo that fell afoul of internet authorities, as circulated by @Yorkson on Twitter:

“The darkness of night has given me dark eyeballs, but all I can do is to roll my eyes.”

“The whiteness of my eyes has the country collapsed and the whole world conquered.”

“Deprived of free speech, ancient people blink their eyes as secret codes. In the new era, we have the freedom to roll our eyes.”

“Everyone has rolled their eyes, but there are not enough cameras to capture all the rolling eyes.”

“White eyes look most pretty on a made-up face, the eyes expose a bunch of shamelessness that doesn’t have a face.”

All the above expressions showed discontent with the censorship of the incident. Since the news broke  concerning China's constitutional amendment on presidential term limits, all words and phrases related to the amendment have been censored online.

Since early March, propaganda authorities have been issuing instructions to make sure that no critical opinions are given space, in both conventional newspapers and on the internet during the “Two-Sessions” — the annual meetings of the NPC and the Chinese People’s Political Consultative Conference (CPPCC) in Beijing.

As anticipated, the NPC passed the constitutional amendment that will pave the way for current President Xi Jinping to rule the country indefinitely. Everything looked harmonious during the Two-Sessions, until Liang's rolling eyes aired on CCTV on March 13.

An unverified report circulated by Apple Daily said that Liang's journalist license was suspended and she was banned from attending press conferences during Two-Sessions.

Despite her absence, the pair of eyes keep on rolling, at least online. @changhan327 praised the rolling eyes for unveiling a moment of truth:

The pair of rolling eyes is epic. It has triggered people’s laughter and ruined the sacred temple of carefully prepared and staged material. It is like a pin stabbing into the butt of the era, a rat running around in a banquet hall. This pair of rolling eyes will become an epic, while other self-designated epics are rotting away. The rolling eyes are like a bolt of lightening that destroys tens of thousands expressions of praise and outshines speeches made by hundreds of thousands of brain-dead people. History will praise it.

The rolling eyes have done more than just inspire some laughs. In recent days, people have begun digging into the identity and background of Zhang Huijun, the reporter to whom Liang was reacting. Zhang presented herself as director of American Multimedia Television Station (AMTV) and enjoyed the rare 45-second question time aired by CCTV in the press conference.

It appears that Zhang has represented several foreign media outlets in the Two-Sessions since 2011. Netizens looking into the origins of the station have come to a conclusion that AMTV is very likely an overseas branch of China's publicity apparatus. A petition has been launched on the US White House petition website calling for further investigation into the news outlet:

We believe AMTV is most likely an unregistered agency of the Publicity Department of the Communist Party of China and secret branch of China Central Television (CCTV).
AMTV reporters cooperate with Chinese officials who would respond to their approved questions with propagandist materials while avoiding real questions from free media. Its programs convey the Chinese government’s lies and anti-American views to the Mandarin-speaking population on American soil.

Based on the Foreign Agents Registration Act, we ask to investigate its fund sources and cooperation with the CPC and shut it down if it is found to have violated the law.

In fact, AMTV’s current president is Jason Quin, whose LinkedIn profile says that he is the president of the Confucius Institute of Education — a Chinese government-funded initiative directly linked to its United Front Department.

Still, all terms related to the reporter's eye roll are still being censored online. But from now on, rolling one’s eyes will carry an extra layer of meaning among politically savvy journalists and netizens in China.