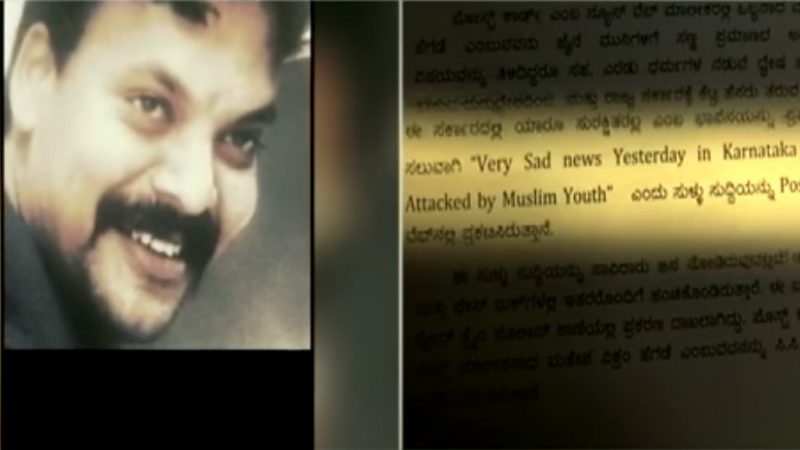 The Indian Government released a statement that says that a journalist's accreditation can be cancelled if they are found to propagate “fake” or “uncomfortable” news.

The announcement came just a week after the arrest of Mahesh Vikram Hegde in Karnataka state. Hegde is the founder of PostCard News, a site that that is known for publishing unverified rumors that show a strong bias in favor of India's ruling BJP party.

The Information and Broadcasting Ministry of the Indian government, led by minister Smriti Irani, released a statement on April 2 suggesting that the Press Council of India (PCI) and the News Broadcasters Association (NBA) — the first being a quasi-judicial body and the second being a private association of news channels in the country— should be charged with determining whether news reports are “fake”. 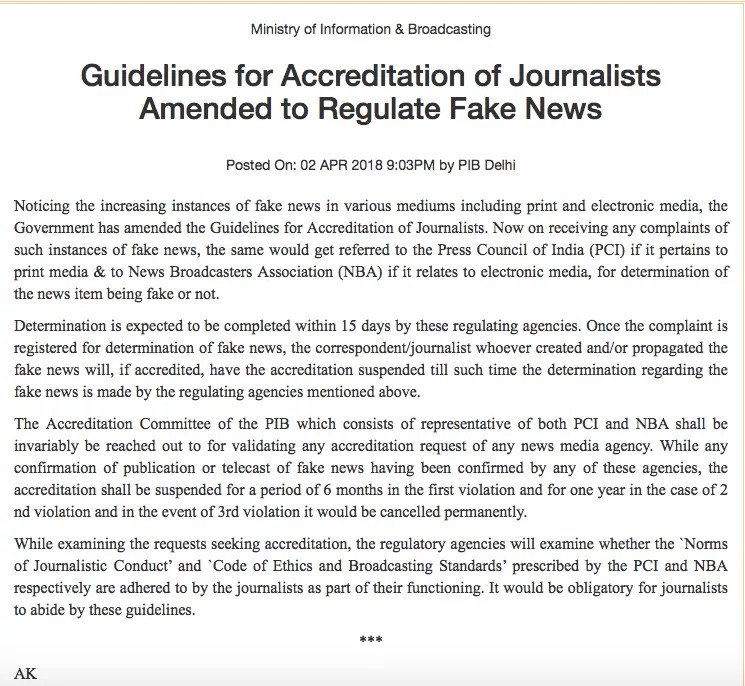 Guidelines published by India's Ministry of Information and Broadcasting. Image under fair use.

The next day, after a huge backlash from many media houses, Indian prime minister Narendra Modi advised the Ministry to withdraw the press release, and let PCI regulate such issues.

Both the news about the regulation and the prime minister's intervention has given rise to politically satirical tweets:

#SmritiIrani climbs down on #FakeNews order as PM #Modi steps in after outcry. My #cartoon for @firstpost #fakenewsbill
Details: https://t.co/3jshSUiIMJ pic.twitter.com/qnkHqNXcnw

Sensing mounting anger on the “fake news” notification, the PM orders a U-Turn on his own order.

One can clearly see a loss of control and panic setting in now. #BasEkAurSaal

When journalist forums like the Editors Guild of India acknowledged the prime minister's intervention, it strongly condemned the regulation in the first place and released a statement:

…The Editors Guild of India strongly condemns the arbitrary manner contemplated by the Union Information and Broadcasting (I &B) Ministry ostensibly to penalise any journalist or media organisation publishing fake news. By notifying that the I & B Ministry will initiate such proceedings, the Government was arrogating for itself the role of policing the media. It would have opened the door for frivolous complaints to harass journalists and organisations to fall in line…

The incident also raises questions about the lack of transparency around processes at PCI and the Central Press Accreditation Committee, a federal body that provides accreditation to news media representatives. If these entities became the sole decision-makers about what is — and is not — “fake news” they might fail to deliver justice.

The risks of political power holders influencing or even forcing them to behave in a certain way are great, and without transparency in their processes, it would be difficult for media workers or watchdogs to determine whether or not they were acting in the best interests of the public.

Censorship and soft power over mainstream media in India have become larger issues in the right-wing Bharatiya Janata Party's rule. Siddharth Varadharajan, Founding Editor of Indian online news portal the Wire, made reference to this in an op-ed:

[..]if implemented, [the guidelines] will place media organisations at the mercy of trolls, bureaucrats, and politicians and strengthen the already visible trend of self-censorship when it comes to politically sensitive stories[..]