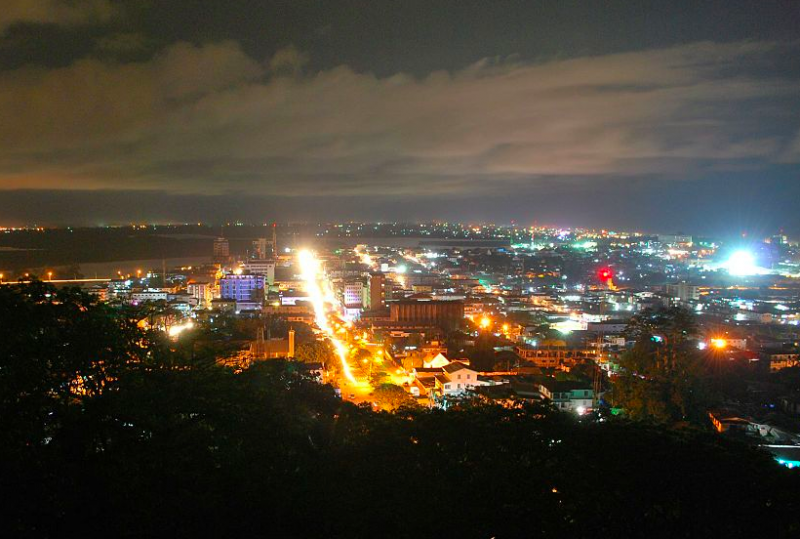 Monrovia at night. Photo by blk24ga via Wikimedia Commons (CC BY 3.0)

The Liberian daily newspaper FrontPage Africa [2] (FPA) is facing a US $1.8 million civil defamation lawsuit [3] triggered by a family feud over a deceased politician's estate.

FPA has been accused of underwriting and publishing a defamatory advertisement [4] that appears in its print edition in mid-March 2018. Placed by family members of deceased former Liberian Attorney General Lawrence K. Morgan, the advert warned readers that the administrators of Morgan's estate, Henry A.K. Morgan and Moses T. Konah, had no authorization to “lease, sell, collect rents, or transact any other business” on behalf of the estate.

Lead staff at the newspaper said the adverts were placed by other members of the Morgan family, in an apparent internal family dispute over the estate. FPA retracted the advert once confronted by Morgan and Konah, but the two nevertheless filed suit [3].

Although the advert was published in several other newspapers, only FPA has faced consequences.

There is now speculation that Konah, who is an influential member of the ruling Congress for Democratic Change party (CDC), used the advert as a vehicle for attacking the newspaper, in retaliation for its critical reporting about the government.

Kamara A. Kamara, former president of the Press Union of Liberia, spoke with Global Voices (GV) to explain the murky history behind the advert and the resulting libel suit against FPA:

A segment of the family had issued an advert in several newspapers indicating that some people in the family did not have the authority to transact business on their behalf. Later the people who were listed as not having the authority of the family [Henry A.K. Morgan and Moses T. Konah] confronted FrontPage Africa to retract the advert which the newspaper did.

This was initially a private family matter but later became political. One of those involved [Moses T. Konah] in the family dispute was a candidate in the last elections and an influential member of CDC [Congress for Democratic Change], the ruling party…The newspaper had some issues with the government. This family dispute was then hijacked by the state to fight FrontPage Africa.

Despite Konah's close ties to the ruling CDC, the Liberian Ministry of Information has denied involvement in the press freedom feud. On April 9, the Ministry issued a public statement [5] asserting that:

the closure of the FrontPage Africa newspaper and arrest of some of its staff was not on the orders of the government of Liberia.

Liberian President George Weah [6] promised in his January 2018  inaugural address [7] to build upon the legacy of “democratic empowerment” from his predecessor Ellen Johnson-Sirleaf “in protecting the rights of Liberians and providing even greater freedom.”

At a recent press conference [8], Jefferson Koijee, a member of the CDC and the Mayor of Monrovia, directly warned Sieh:

[do not] use the media to launch your selfish, cruel agenda, because Liberia needs to be developed and this is the best moment.

Just a few weeks before the lawsuit was filed, FPA triggered frustration in the government when it reported on President Weah's decision to sack the head of Liberia Extractive Industries Transparency Initiative [9] (LEITI), an autonomous agency established to ensure [10] “transparency in Liberia’s forestry, oil, mining, and agricultural plantation sectors. It has the legal mandate to publish company contracts and the money they pay to the government.”

Following President Weah’s announcement, Mr. Nyekan stormed the offices of the LEITI secretariat with armed police officers in tow and demanded that its head Konah Karmo leave the building. Karmo is reported to have complied with Nyekan’s orders given at virtual gunpoint.

A report by FPA asserted [12] that the move “blatantly contravenes the Act that created the [LEITI] agency.”

Only a few weeks after FPA reported on the LEITI scandal, the newspaper was slammed with the crippling libel civil lawsuit, leading many press freedom activists to believe that FPA is indeed being targeted for its critical reporting on the government.

Defamation suits should not be used to silence the press, and in this case FrontPage Africa is being penalized months before the newspaper even has its first court date. The order to seize assets, including its office, must be rescinded immediately – as should the performance bond imposed upon the paper… Liberian democracy requires independent voices and impartial information, like that provided by Front Page Africa and LEITI. President Weah should ensure that Liberia’s press – including the vital Front Page Africa – remains free, and reinstate LEITI’s Secretariat Head Konah Karmo.

The Committee to Protect Journalists (CPJ) expressed concern [15] over the US $1.8 million libel lawsuit against FPA “that has long been the subject of complaints and harassment for its critical reporting on successive governments.”

Former Press Union President Kamara asserted that the move looks more like an attack on FPA for its critical stance:

Why didn't Henry A.K. Morgan and Moses T. Konah also involve other newspapers who published the said advert in this defamation suit? That's why it looks like an attack on FrontPage Africa for its critical stance against the government. To get people arrested in face of a civil case is repugnant. Civil offences should be fought using civil means. To arrest someone based on an allegation of a civil action is an affront to free speech. Imprisoning people on these laws is a criminalization of free speech which is critical to media freedom.