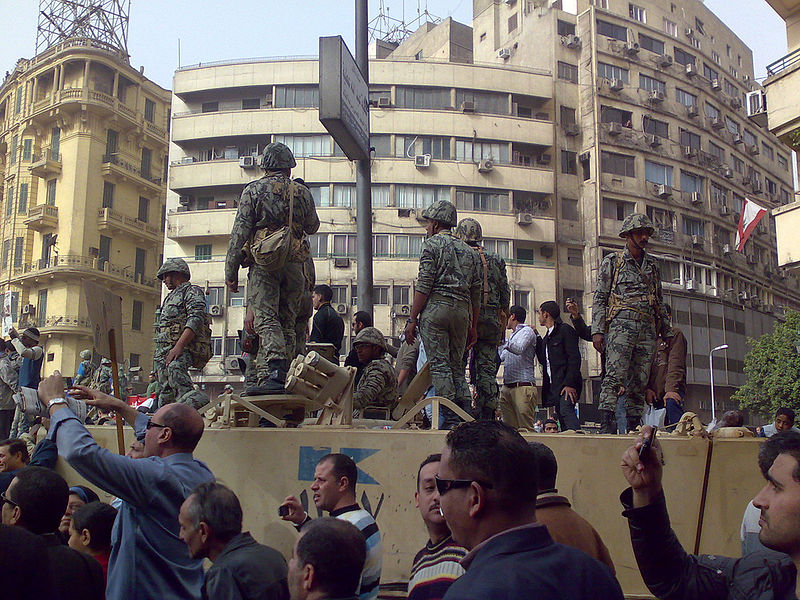 On June 5, Egypt’s parliament approved a cybercrime law that will dictate what is and is not permissible in the realms of online censorship, data privacy, hacking, fraud and messages that authorities fear are spreading “terrorist and extremist ideologies.”

The law also creates a stronger legal basis from which authorities can pursue voices of dissent or political criticism. While the Egyptian government is notorious for censoring websites and platforms on national security grounds, there have been no laws in force that explicitly address this practice until now.

In the month of May 2018 alone, authorities picked up multiple bloggers and well-known social media activists on similar grounds.

On May 23, Egyptian police raided the home of journalist and blogger Wael Abbas and arrested him. His whereabouts are still unknown but authorities confiscated his personal computer, phones, and books, according to a statement published by the Arabic Network for Human Rights Information (ANHRI). The network condemned the arrest, describing it as a “kidnapping,” given that authorities forcibly entered Abbas’ home, blindfolded him and took him into custody while still in his night clothes.

While Abbas was able to publish a brief sentence on his Facebook account which said: “I am being arrested,” no official statement has yet been issued by the Egyptian authorities on the incident. An Egyptian journalist, known to be closely allied with the authorities, blamed Abbas for publishing “fake news” about military operations in Egypt’s Sinai region.

Just a few days prior, another blogger, human rights activist and labor lawyer Haitham Mohamedein, was seized by Egyptian authorities. He had been accused of a number of crimes, including “using the internet to incite against the state” and “incitement to protest.” He was detained for 15 days while authorities investigated his activities.

Shadi Abou Zeid, who had previously worked as a producer for a well-known satirical show featuring a chatty puppet character named Abla Fahita, was also arrested for “spreading false information on Facebook about the economic and political states of the country with the intention to undermine trust in the Egyptian state.” He is currently in custody as part of a 15-day detention and is awaiting formal charges.

A Nigerian woman employed by the presidential amnesty office lost her job after criticizing Vice President Yemi Osinbajo and President Muhammadu Buhari’s wife Aisha on Twitter. The office described her tweets as a “threat to national security” and dismissed her under public service rules that define “false claims against government officials” as serious misconduct.

Azerbaijani human rights lawyer Emin Aslan was abducted by men in plainclothes just days after re-entering his native country, after completing a law degree in the US. During that time, his Facebook account — which had been deactivated for months — suddenly became active. His phone also appeared to be in use, even though since his return to Azerbaijan, Aslan had not used his phone. More than a day later, authorities revealed that Aslan was in their custody, and was being held in administrative detention for 30 days on charges of “disobeying the police”.

Facebook shared your data in order to create ‘Facebook-like experiences’

Facebook established data sharing agreements with phone and device makers including Apple, Amazon, Microsoft, and Samsung that granted the companies access to substantial amounts of data on users and their friends without their explicit consent, according to a report by the New York Times. Some partners can retrieve information including a user’s relationship status, religion, political leaning, and events, among other data. In a response, Facebook asserted that the APIs it developed for device makers were necessary to create “Facebook-like experiences” on their devices, and that the partners signed agreements preventing them from using the data for any other purpose.

“We are not aware of any abuse by these companies”, Facebook said, but added that it is winding down access to them and has already ended 22 of its partnerships. The report raises more questions about Facebook’s commitment to privacy protections in the wake of this spring’s Cambridge Analytica scandal, in which the data mining company used data from Facebook beyond the boundaries of the two companies’ initial agreement.

Google announced it will not renew its contract for Project Maven, a controversial project to provide artificial intelligence to the US Department of Defense to aid in analyzing drone footage. Thousands of Google employees signed a petition asking the company to cancel its contract for the project, and dozens resigned in protest.

Civil society calls for input on digital future at the G20

A coalition of civil society advocates working at the intersection of human rights and technology wrote an open letter calling on government participants in the G20 summit in Argentina to ensure that “the evolving digital society supports a healthy web ecosystem and puts people first.” They touched specifically on the importance of meaningful access to ICTs, privacy and data protection rights, freedom of expression, cybersecurity and increased competition in digital services.