Telegram channel administrator could get death penalty for “insulting the Prophet” 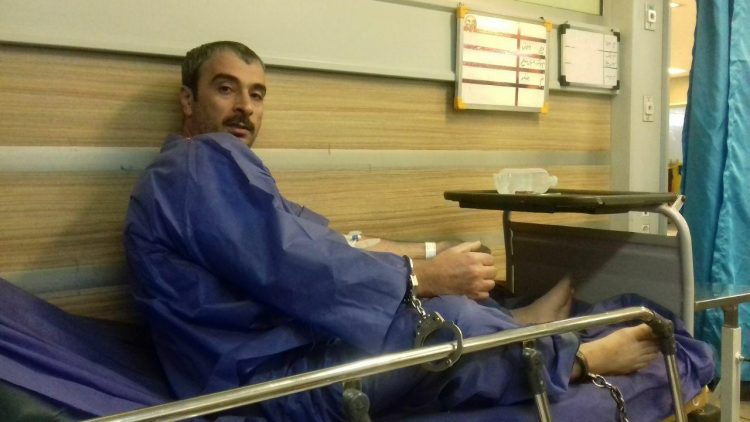 Weakened by his hunger strike, prisoner of conscience Hamidreza Amini was transferred to a hospital in hand and ankle cuffs but was returned to prison before the treatment was completed. Photo shared with CHRI and reposted with permission.

Below is an edited version of an article that first appeared on the Centre for Human Rights in Iran website.

Hamidreza Amini could face the death penalty if he is convicted of “insulting the Prophet” for the content of his Telegram app channel, a source close to the prisoner of conscience told the Center for Human Rights in Iran (CHRI) on June 5, 2018.

Amini is due to go trial on June 25, 2018, for the charges of “insulting the prophet,” “insulting the supreme leader,” “acting against national security,” “propaganda against the state” and “disturbing public opinion,” said the source who requested anonymity due to the sensitivities in Iran around speaking to foreign media.

A 47-year-old mobile phone repairman, Amini was arrested by the Islamic Revolutionary Guard Corps’ (IRGC) Intelligence Organization in Tehran on December 2, 2017, for activities on his Telegram channel, which he managed under the pseudonym, “Ariyobarzan.”

According to the source who spoke with CHRI,

Hamidreza had created a Telegram channel where anyone could post her/his views, the IRGC held him responsible for everything others had written and when he told the investigator that he did not write those things, he was told that his channel and related groups had been shut down and therefore the IRGC could accuse him of anything they want.

“First of all, anyone is free to express his or her views and that’s what Hamidreza and the people in his group did,” the source said. “But most of the things he has been accused of, including ‘insulting the prophet,’ were written by others… He is being prosecuted for what 3,000 people did.”

After his arrest, Amini was held in solitary confinement in Evin Prison’s Ward 2-A where he was interrogated without access to legal counsel.

In late February 2018, he was moved to the Great Tehran Penitentiary in Fashafouyeh, 20 miles south of Tehran, without a court order. However, he was returned to Evin Prison on June 3 after going on hunger strike to protest his condition, according to the source.

The source added that Amini was hospitalized for the effects of the hunger strike but transferred back to the prison before the treatment was completed.