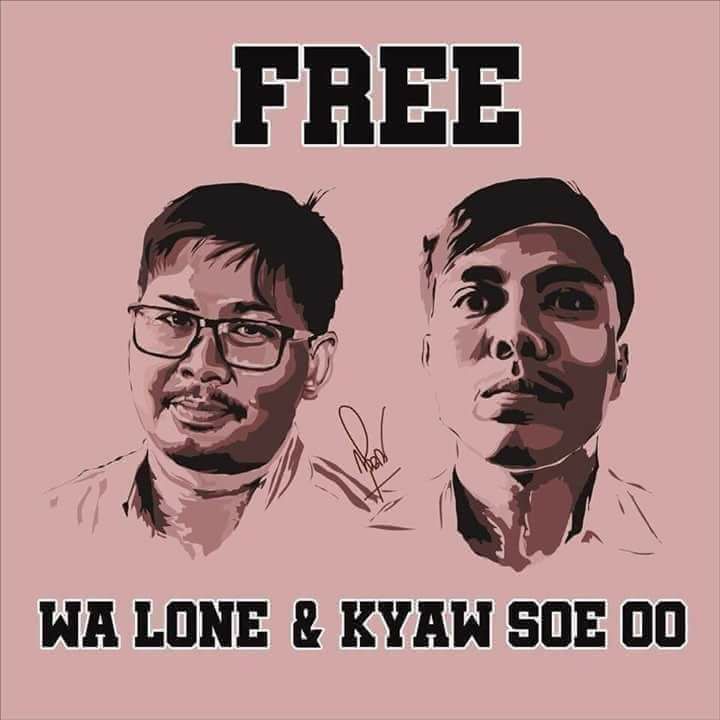 One of many online campaigns’ images demanding the release of wrongly accused journalists.

Two Myanmar reporters who were covering the killing of Rohingya in Rakhine state last year were sentenced to seven years prison on September 3 for violating the Official Secrets Act of 1923 after a nine-month-long trial.

Wa Lone, 32, and Kyaw Soe Oo, 28, were working for Reuters when they were arrested in December 2017 for possessing state documents regarding military operations in Rakhine state. In court proceedings earlier this year, police testified that they had handed the documents to the reporters without explanation, shortly before the arrest.

The two reporters were investigating the killings of 10 Rohingya villagers by the military in Inn Din village in the northwest of Rakhine on the aftermath of the clashes between the army and Arakan Rohingya Salvation Army (ARSA) in August 2017. The clashes were followed by the displacement of more than 700,000 Rohingya refugees into Bangladesh.

Myanmar's government does not recognize Myanmar-born Rohingyas, most of whom are Muslim, as citizens or as an ethnic group living in Myanmar. The government designates ARSA as a terrorist organization.

In April 2018, police captain Moe Yan Naing testified in court that he and a colleague were ordered to entrap the reporters. He was sentenced to one year in prison after that testimony for violating the Police Disciplinary Act. He told reporters after the hearing that sentenced him: “Putting me in prison stops other police officers from saying the truth”.

Immediately after the court decision, Free of Expression Myanmar (FEM), a local civil society group, released its statement denouncing the state for its failure to protect journalists.

The conviction shows the lengths to which the Myanmar state is willing to go to hide its wrongdoing. In the past, the state has mostly bullied and jailed local journalists, but now it has picked on one of the most renowned media houses in the world.”

On the same day fifty Myanmar civil society organizations have signed a statement letter requesting for the release of two journalists.

The case has attracted outrage not only internationally, but inside Myanmar too.

Many people in the country, including civil society organization and activists, have been speaking out against the journalists’ arrest since last year.

Last month, A-than (Voice), a local civil society group working for the abolition of Myanmar's online defamation law, launched a video campaign on social media featuring several activists from Myanmar calling for the release of the journalists. The statement message of the campaign posts read as:

Reuters Journalists Wa Lone and Kyaw Soe Oo were arrested and detained when they were doing their investigative report on the killings in Inn Din village committed by Ta-ma-taw [Army]. Inn Din village killings were admitted by Ta-ma-taw and seven army officers have been convicted by war court already. Wa Lone and Kyaw Soe Oo were acting ethically in order to get reliable information for people. Captain Moe Yan Naing has already testified that [the reporters] were set up by the police because of the news that they were covering.

A few days before the hearing on September 3, many marched in the city of Yangon, Myanmar's economic capital, to demand journalists’ release.

For some, the case reinforces the growing disappointment with the government of the National League for Democracy (NLD), headed by noble peace laureate Aung San Suu Kyi. Peace activist Moe Thway expressed his disappoint for Aung San Suu Kyi for not speaking out to protect the journalists.

The fact that Wa Lone (and Kyaw Soe Oo) were given unjust prison sentences is not because of the court alone.

Daw Aung San Suu Kyi and her government are also responsible for approving their arrests and saying that they were guilty.

Daw Aung San Suu Kyi has clearly revealed her characteristic of a dictatorship.

In a statement [pdf] condemning the verdict, organized by A-than and signed by 63 local NGOs, supporters wrote:

We believe that the decision by the court is irrational and the case was brought against the two journalists….to justify [their] arrest and imprisonment…We take this as a crackdown on the right of access to information and media freedom, and an oppressive gesture [against] all concerned people of Myanmar who are aspiring [to]….a society characterized by rule of law, accountability, freedom and justice.

The court decision was also condemned by the international community, including statements released immediately by US Embassy in Myanmar and EU Union in Myanmar.