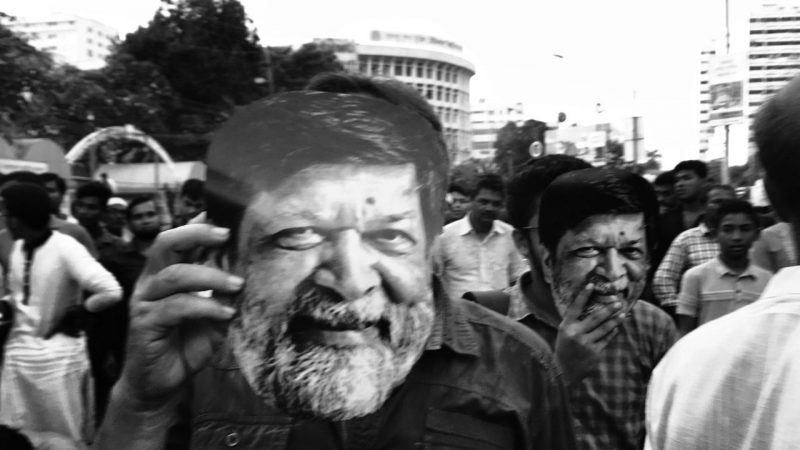 People gathered at the Shahbag Square in the Bangladesh capital of Dhaka wearing masks to protest the detention of internationally acclaimed photographer Shahidul Alam and other students. Image by Pranabesh Das, used with permission.

Detained Bangladeshi photojournalist Shahidul Alam has once again been denied bail in a case filed under the Information, Communication and Technology Act (ICT) for instigating “students to continue a [recent] movement against the government” and “spreading propaganda against the government”. Alam and his acquaintances deny those charges.

Meanwhile, protests continued at home and abroad to release the photographer and other detained students. A number of students got bail a few weeks ago, but an unknown number are still detained.

Alam was detained on August 5, 2018, officially arrested the next day, and ultimately sued under the ICT Act, to which his counsels submitted the bail petition on August 28.

On September 4, a two-member High Court bench felt ‘embarrassed’ to hear Alam's bail in the case. In Bangladeshi judicial practice, the judges can sometimes feel embarrassed to entertain cases demanding a fair and impartial dispensation of justice, especially if any party in the case is personally known, directly or indirectly, or if they fear they will be threatened or intimidated. Alam's counsels appealed to the High Court who directed the lower court concerned with the case to dispose of the plea by Tuesday.

#Bangladesh‘s #HighCourt judges felt #embarassed to hear #BailPetition of #ArbitrarilyDetained #Protographer #ShahidulAlam after a day's delay for allowing #AttorneyGeneral a #chance to argue in favour of the #Government. Thus, #injustice takes its roots! https://t.co/LAj3iHpNGY

Arrested for expressing his views

Alam was arrested in August after covering the student protests against ineffective traffic laws in Bangladesh on his Facebook and Twitter accounts and discussed the protests on Facebook Live.

Thousands of secondary school students in the capital city of Dhaka took to the streets on July 29 in sustained protests lasing more than a week, demanding improved road safety and rule enforcement after two of their classmates were killed due to reckless driving by a public bus.

Alongside his social media coverage of the protests, Alam gave a television interview with Al Jazeera where he talked about the recent situation in Bangladesh and criticized the government.

A #Bangladesh court has rejected bail for photographer Shahidul Alam, who was arrested after criticizing Prime Minister Sheikh Hasina in an interview. Here’s a smattering of his award-winning work. https://t.co/ESlMbpRIun

Glad to hear Foreign Office are raising human rights abuses w/ authorities in Bangladesh in response to my #freeShahidulAlam letter to minister @MarkFieldUK One wonders if repressive government feels more able to get away with stuff now eyes of the world diverted to Rohinga pic.twitter.com/Jbd6eFjxKr

You look around in the #world and who are the global leaders [in documentary #photography. and there is really no one more important than Shahidul Alam, especially in our region – RMIT University photography lecturer Alan Hill. https://t.co/0ZmDkKv4SW @SBSNews @_MAQUETTE_

In Bangladesh, numerous protests and solidarity rallies have been organized in the past weeks to demand the unconditional release of Shahidul Alam and other detained protesters.

My hands are tied by invisible shackles, my teardrops have blurred you. Sir I couldn't do anything for you. Shahidul Alam is in Keranigonj jail now. #FreeShahidulAlam #freeshahidul

On September 4, the Drik Gallery hosted an exhibition of selected photos of Alam titled “A Struggle for Democracy” to highlight his struggles and honor the fact that he founded the picture gallery 29 years ago.

Alam is also the founder of the Pathshala South Asian Media Institute, a school of photography and multimedia journalism, and the Chobi Mela, a biannual International Festival of Photography.

On Sunday, September 9, a public gathering titled “Let democracy be free” was held at Shahbag Square in Dhaka to protest Alam's imprisonment along with several other students. Some of the images can found in this Instagram post:

“Let democracy be free” A public gathering to protest the imprisonment of Shahidul Alam and other students. September 09, 2018: Shahbag Dhaka. Photo @pranabesh

Participants used art and performance to express their grievances.

One woman wore a paper bag which read “We are not supposed to have heads” and “we don't have tongues, words”. Another protestor sang and played guitar while wearing a makeshift cage. In front of the cage, a helmet and hammer were placed, signifying the pro-government vigilantes wearing helmets who attacked the student protestors using hammers.

A duct-taped camera was displayed along with a banner beside it that read “Let Democracy Be Free”. 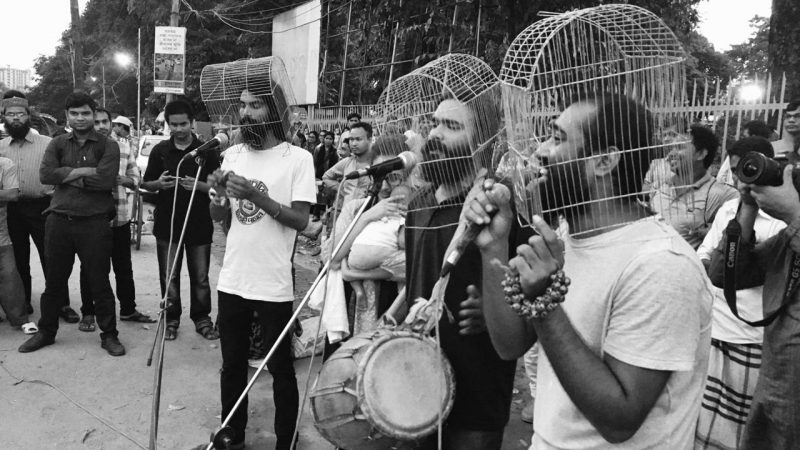 “Let Democracy be free”. An innovative protest in Shahbag Square in Dhaka, demanding the release of Shahidul Alam. Image by Pranabesh Das, used with permission.

Protests in solidarity have been also arranged abroad in cities like London, New York, and Washington DC:

‘Tell everybody to be strong – I am’. Fascinating to hear from Shahidul's friends, colleagues and elder sister at the #freeshahidulalam protest in London. pic.twitter.com/8ej7GdoJ2u

We are standing in solidarity with Bangladeshi photographer #ShahidulAlam in Washington DC. Shahidul Alam was arrested from his home in #Dhaka on Aug 5, hours after he posted a video to Facebook about protests in the city. #freeshahidul #FreeShahidulAlam

‘Tell Someone’ (for my incarcerated uncle, photographer @shahidul001). When I was a child my uncle taught me: “if someone does anything bad to you, the best thing is to tell as many people as possible straight away. Don’t hide it, fearing others may not believe you. It won’t go away. Your best protection is to let people know and tell the perpetrator you are letting people know. But be transparent. Say what you say in front of everyone, including the perpetrator”. When he shouted that statement about his blood stained punjabi in those few moments he had, in front of the police, in front of the world, I knew he was applying that theory. He told the world and he let the perpetrator know that he told the world. (My son’s painting of the Bangladesh flag, on my aunt Rahnuma Ahmed’s sari). #freeshahidulalam @theartnewspaper.official @nytimes @washingtonpost @time @thetimes @financialtimes @skynews @guardian @itvnews @bbc @channel4 @cnn @dhakatribune @newage_bd2011 @dhakaartsummit @dailystarbd @bdnews24.comm @unitednewsofbangladesh@indiartfair @kochibiennale @kochibiennalefoundation @the_hindu @indianexpress @kathmandupost.official @lemondefr @indiaartfair @india.today @amnesty @peninternational @tatemodern_official @themuseumofmodernart @thephotographersgallery @photographmag @royalphotographicsociety @commonwealthinstitute @autographabp #freeshahidulalam #censorship #bangladesh #bangladeshprotest #asianart #contemporaryart #childrensart #photography #royalphotographicsociety #blackphotography#humanrights #prisonerofconscience

More protest art is available through Karim's Instagram account and her interview with the British Broadcasting Corporation (BBC).

‪Disgraceful cowardice on the part of the judiciary and the ruling Awami League government in Bangladesh! When a regime is governed by nothing but fear, it is often a sign that the regime might have lost its plot. Weaponising fear as a tool to govern citizens, or trying to act tough – do not hide who are the afraid ones here!

A nationwide demonstration has been called for by student organizations on September 17 if Shahidul Alam and other student leaders are not released.