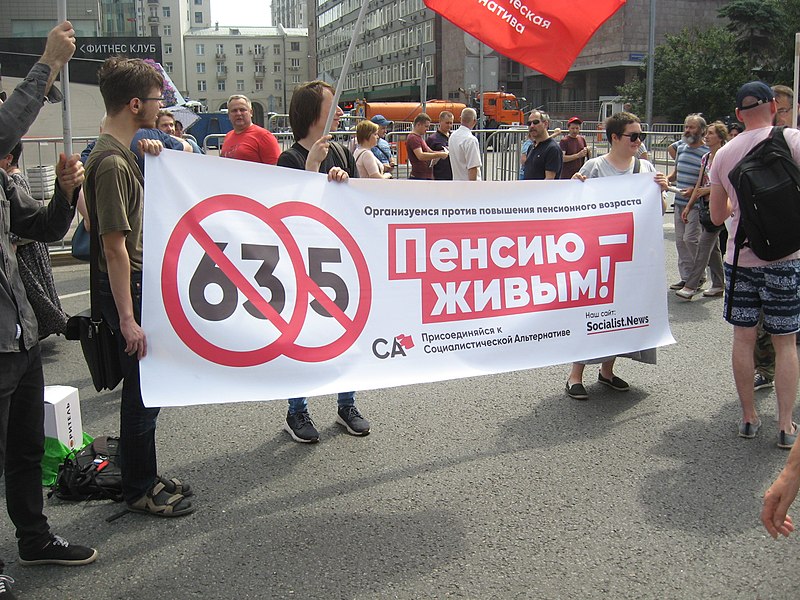 “Pension to the living!”: Russians protest against an unpopular pension reform. Photo by Andrew.Filin via Wikimedia Commons (CC 1.0)

When Russians took to the streets to protest proposed pension reforms on September 9, an estimated 1200 people were arrested in 38 cities. Police officers could be seen beating protesters in several instances caught on camera.

September 9 was also election day for regional legislatures and the Moscow mayoralty, which may partially explain the extreme, heavy-handed actions of law enforcement during the protests.

Throughout the protests and in the days that followed, the Russian non-government organization OVD-Info was gathering and disseminating information on arrests and police brutality. The group also provided legal assistance, with the help of 24-hour phone hotline — and an automated chat bot.

Named for the Russian acronym for “law enforcement agencies” (OVD), OVD-Info works to gather information on all forms of politically-motivated arrests and prosecutions. OVD-Info describes its mission and activities as follows:

OVD-Info is an independent human rights advocacy media project on political repression in Russia. With the help of a hotline, we collect information about arrests at public actions and other forms of political repression, and publish news and coordinate legal assistance for detainees…. This could be telephone consultations, sending a lawyer to law enforcement agencies, helping out in Russian courts at trial and during appeals, or finally, submitting a complaint to the European Court of Human Rights…We don’t support any specific political tendency and defend people regardless of their (or our) political views.

The mobile messaging app Telegram is extremely popular in Russia, so OVD-Info decided to use this tool as another way to help protesters defend their rights. In addition to a relatively secure private messaging feature, Telegram allows users to follow publicly accessible “channels” relevant to their interests, which can be anything from politics to humor and pornography. Users can also develop bots that can interact with other users in channels, or on an individual basis.

Recently, OVD-Info developed a special Telegram bot that allows users to voluntarily report their arrests and any other interaction with law enforcement. Upon contacting the bot, a user is prompted to share their name and telephone number and an encrypted chat is launched.

Once an arrest is reported, OVD-Info will try to follow what is happening with the user. Through the bot, users can also get advice on what to do after being arrested, and which legal statutes to cite when speaking with law enforcement officers. It also can be used to send a message to the OVD-Info team, should the need arise.

While it may be difficult to imagine being able to access your phone while or after being arrested, not all of the arrests during the recent protests were as brutal or dramatic as some of the beatings seen on video. In some cases, the police simply arrived in buses asked protesters to climb aboard. Some people were able to take selfies and videos while on the buses. Taking and sharing selfies from the back of a police van has become a symbol of honor among protesters. 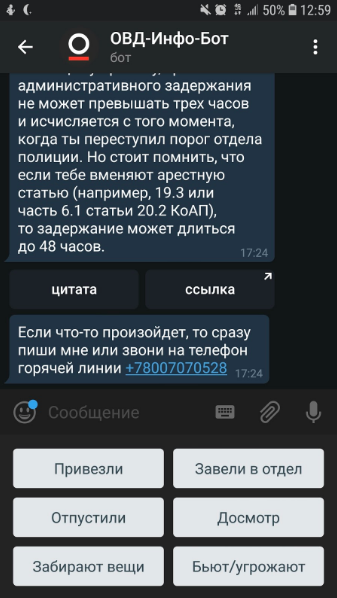 Screenshot of OVD-Info-Bot with several automated messaging options, from “I’ve been released” to “They’re beating / threatening me”.

Are these communications entirely secure? It's hard to say. Although Telegram boasts of encrypted messaging ensuring only the sender and intended recipient can read a message, technologists and activists have raised concerns about the quality of Telegram's encryption standards and other security features.

If correspondences between protesters and OVD-Info were ever compromised, it could expose activists to further state surveillance and repression. Telegram also recently updated its privacy policy to allow for the sharing of user information with authorities during terrorism cases, a rule that could easily be exploited by Russian authorities, who have been known to abuse the application of laws concerning extremist and terrorist activity in connection with posts on social media.

Although Telegram has not proven to be the most secure messaging app on the market, it is the most popular mobile app in Russia that offers encrypted features at this level, making it a strong choice for an NGO seeking to support thousands of protesters in action.

In an interview with Global Voices, Boris Beilinson, OVD-Info’s in-house programmer and developer, shed some light on the bot’s functionality and how it was used this past Sunday.

Global Voices (GV): Was this the first time OVD-Info used this type of bot?

Boris Beilinson (BB): No, the bot was released before protests on June 12, 2017 [anti-corruption protests that took place across Russia].

GV: What drove the decision to develop this bot and not just rely on other methods like the hotline, private messages on VKontakte, and so on?

BB: We didn’t stop using any of the old methods of communication, including the main one, the hotline. But we wanted to lessen the burden on the hotline, because during days of big protests, it’s hard to deal with a large number of calls, so chat is more convenient then. Now a large part of our internet communications are happening with the bot, and the hotline got a bit of a break. We liked this not just from a technical standpoint, but also because from our point of view, Telegram is the most secure method of communication we use. We trust it and believe that through the bot, we can talk about things that are better left unsaid by telephone.

GV: How many people shared their contact information before the protests on Sunday?

BB: As of now, 16,002 people contacted the bot, of which 8,185 left their contact information and gained access to its primary functions.

GV: How many of them reported their arrest through the bot?

BB: Not a big number, 184 (the great majority of them started talking to the bot that day to report their arrest).

GV: Do you think the bot was a success? Are there any other functions you’d like to add?

BB: Considering the effort that went into its creation, it’s definitely a success. One indicator of success are the growing pains: it got tough to manage the flow of messages the old way so we have to develop special administrative functions. Of course, we also want to develop other functions for the user. Particularly, instructions for defense at court will be added soon; unfortunately, repression of protestors doesn’t end at arrests in our country.