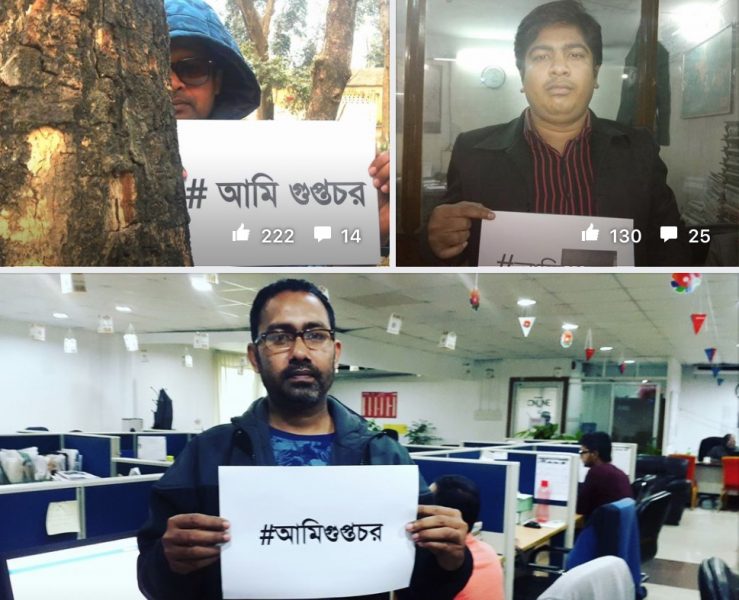 In February 2018, journalists demonstrated their opposition to the new law using the hashtag #IamASpy, referring to the law's provision of espionage charges against those who handle classified state documents. Screenshot from Facebook.

On September 19, the Digital Security Act 2018 was passed by the parliament in Bangladesh, with just 11 lawmakers opposing the bill, despite widespread opposition from journalists and human rights advocates.

With the next general election approaching in the coming months, some speculate that the law is intended to stifle criticism of the ruling party and the spread of disinformation online. The Act was introduced as part of the government's “Digital Bangladesh” agenda – a framework for bringing the country's services, government, private sector and citizens into the 21st century with technology.

The Bangladeshi The Editors’ Council, made up of editors from numerous Bengali news outlets, said they consider the Act to be “against the freedom guaranteed by the constitution, media freedom and freedom of speech.” International media and human rights groups, including Human Rights Watch, have also condemned the law.

In response to critiques, Prime Minister Sheikh Hasina has suggested that there is nothing for journalists to worry about. “Journalism is surely not for increasing conflict, or for tarnishing the image of the country,” she said in a speech before parliament.

Sections of interest within the Act:

The Right To Information Forum, a coalition of 45 organisations in Bangladesh, also expressed “deep concern” about the passage of Digital Security Act 2018 by the Parliament. In a press statement, the coalition wrote:

[The Act is] clearly inconsistent with the fundamental constitutional rights to freedom of speech and expression as per Article 39 of the Constitution and, therefore, undermines democracy and human rights, which are among the fundamental principles of state policy.

Specifically, the group expressed concern about provisions within the Digital Security Act which “create an impediment” for citizens to acquire information from the government. This would sit in contrast to the Right to Information Act, which was passed in 2009 to improve transparency and accountability in government by allowing citizens to file formal requests for government documents and data.

Posts, Telecommunications and IT Minister Mustafa Jabbar had previously announced that the new Digital Security Act would replace Section 57 of the previous Information and Communication Technology Act 2006, which had also been criticised by rights activists and journalists for the way it was used to target and punish journalists. Most recently, photographer and journalist Shahidul Alam was charged under Section 57 after posting extensive coverage of student protests in Dhaka and giving an interview to Al-Jazeera about the protests. He remains in prison after more than two months.

But the final text of the Digital Security Act expands and reinforces this section, instead of repealing it as promised. And despite Jabbar’s assurances in May 2018 that “necessary amendments so the freedom of the press does not get hampered”, the Act passed without any major reforms.

The new Digital Security Act is a tool ripe for abuse and a clear violation of the country’s obligations under international law to protect free speech. With at least five provisions criminalizing vaguely defined types of speech, the law is a license for wide-ranging suppression of critical voices.”

The Editors’ Council will stage a human chain protest against the Act on September 29, in front of the National Press Club.

‘According to the Digital Security Law, I am a Spy': Bangladeshi Journalists Defend Their Right to Investigate, February 2018

Bangladesh Shuts Down the Internet, Then Orders Blocking of 35 News Websites, August 2016