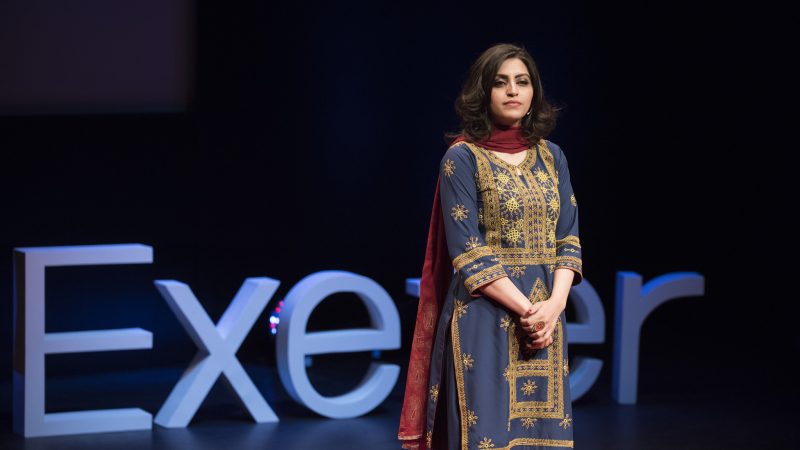 Gulalai Ismail speaking at TEDxExeter 2017 at the Exeter Northcott Theatre in Exeter, UK on Friday 21st April, 2017. Image from Flickr taken by Matt Round of Matt Round Photography. CC BY NC ND 2.0

Pashtun human rights activist and founder of Seeds of Peace network Gulalai Ismail was arrested at Islamabad Airport on October 12, when she arrived on a flight from London.

Upon her arrival, she was arrested by the Federal Investigation Agency (FIA) and interrogated for eight hours. She was informed that  her name is on the Exit Control List which restricts her to travel abroad.

She was released on the same day, following immense social media pressure by progressive parties, feminist collectives and other groups.

The Pashtuns are an ethnic minority group who mostly live in Pakistan and Afghanistan. Discrimination and violence are constant threats for Pashtuns, half a million of whom have been internally displaced due to the conflict between the army and the Taliban militant group. In 2016, Pashtuns were given official clearance to return to their home in Pakistan's Federally Administered Tribal Areas, but landmines planted there prevent many from making a safe return.

The Pashtun Tahafuz (Protection) Movement, known as PTM for short, has become a rallying point for thousands to speak up about these injustices. Gulalai is an active member of the movement.

Gulalai was one of 19 people named in a police complaint report for organizing and speaking at a PTM rally in the northwest town of Swabi, in the Khyber Pakhtunkhwa province of Pakistan on 12 August. The charges against PTM activists include “unlawful assembly”, “punishment for rioting” and “punishment for wrongful restraint”.

While Gulalai has been released, 9 activists are still under arrest for helping organise a PTM gathering in Swabi.
One of them is Faiz Mohd Kaka. He is 85 years old nd one of the few living members of Khudai Khidmatgar Tehreek. Shame!
ڈرتے ہیں بندوق والے ایک 85 سالہ شخص سے pic.twitter.com/bVgL6hPdRd

Gulalai issued an audio statement via WhatsApp stating that she was arrested for “raising a voice for civil rights and peace-building” and “participating in PTM Jalsa (gathering) in Swabi (her hometown)”.

In her statement she said:

The news of Gulalai's arrest spread like wildfire on social media. There were tweets and messages of solidarity with her by progressive groups within the country and abroad.

Our friends and colleagues from Women Democratic Front, Awami Workers Party and PTM had a campaign for my release on social media. Because it was brutal to confiscate a citizen's passport for raising her voice for rights. But today is the day that shows it's a day of people's power — the youth and workers built pressure…that the (authorities) can't detain their workers… they built it through social media and also by coming to the FIA office.

Gulalai ismail has been released. Congratulations everyone! pic.twitter.com/c3g3kUKHNc

While she was still being held at the airport, Amnesty international issued a statement saying that Pakistan must immediately and unconditionally release Gulalai Ismail.

"Instead of trying to silence human rights defenders, the new government must work to create a safe and enabling environment for those who raise their voices for justice,” said Rabia Mehmood, South Asia Researcher at Amnesty International. @Rabail26 #PTM #Pakistan #ReleaseGulalai

Women Democratic Forum, a Pakistani based leftist feminist political collective of women also issued a message of solidarity with Gulalai.

We strongly condemn the detention of @Gulalai_Ismail a member of WDF KP & known feminist activist by FIA. We have information that she’s being handed over to Swabi police in the Swabi PTM jalsa FIR. We demand immediate release of Gulalai #ReleaseGulalaiIsmail #DaSangaAzadiDa

Shocked to hear #Gulalai_Ismail has been arrested by the #PuppetGovernment for raising a voice for #Pashtun rights. Strongly condemn the cowardly act & demand an immediate release. #HumanRights activists face serious threats in #Pakistan #ReleaseGulalaeIsmail

Relieved to know that @Gulalai_Ismail is released on her own recognizance in #PTM Swabi Jalsa case. But her name is still on Exit Control List & passport confiscated by FIA. Pak authorities must end this continuous intimidation of #humanrighstdefenders. https://t.co/rrYV8s5cF0

Gulalai says she will petition to the high court to have her name removed from the Exit Control List and to reclaim her travel documents.