When will Egypt release photojournalist Mahmoud Abu Zeid aka Shawkan? 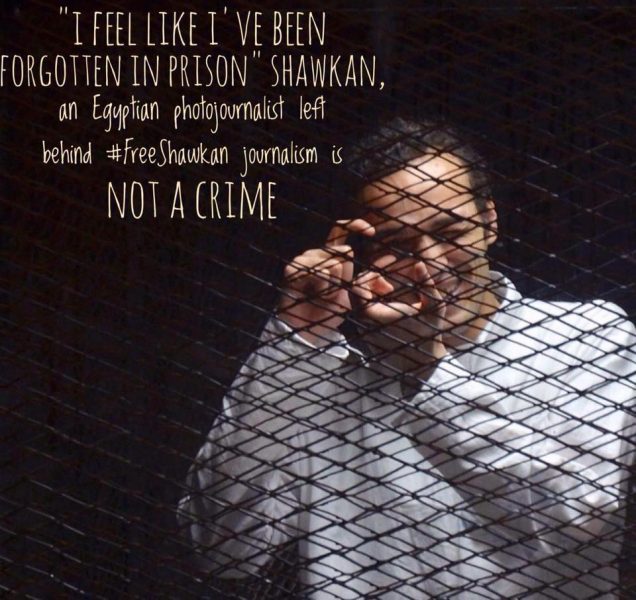 Photo shared by the Freedom for Shawkan campaign on Facebook

In early September, when a Cairo Criminal Court handed a five-year jail sentence to photojournalist Mahmoud Abu Zeid, his supporters were relieved.

Mahmoud Abu Zeid, known online as Shawkan, was unlawfully detained and tried for photographing the 2013 bloody dispersal of the Rabaa El Adaweya sit-in, during which Egyptian security forces killed at least 817 people and injured many more. Shawkan was working for Demotix at the time.

As the 31-year-old freelancer had already spent five years in jail awaiting trial, there was hope that he would not be made to serve additional time. Yet today, more than one month after the Cairo court verdict, Shawkan remains in jail.

Shawkan was tried along with 739 other defendants in what is known as the “Rabaa Dispersal Case”. He was arrested on August 14, 2013 as he was covering the sit-in, in which supporters of former Egyptian president Mohamed Morsi gathered to protest a military coup that ended his presidency on July 3 that same year. Shawkan spent almost four years in pre-trial detention, in violation of Egyptian law which sets the maximum limit to two years.

On September 8, 2018, he was convicted on spurious charges of murder and affiliation with the Muslim Brotherhood, now designated as a terrorist group by the Egyptian government.

Despite hopes that he was going to be freed soon, Shawkan's ordeal is yet to come to an end, and there has been no public explanation as to why Shawkan remains in jail to this date. His supporters continue to demand his release.

#Egypt ??: More than a month after an unfair verdict sentenced him to 5 years of prison already served, photojournalist ?@ShawkanZeid remains behind bars. He must be released immediately! #Freeshawkan #PressFreedom pic.twitter.com/zFDgSmps4s

In a statement released on October 11, the Arabic Network for Human Rights Information (ANHRI), called on Egyptian authorities to free Shawkan and denounced the trial's irregularities:

The first blow came when officials, officers, and soldiers had been excluded in the indictment or the formal statement of accusations, despite the hundreds of victims who fell on 14 August 2013, the day the sit-in was dispersed. The second blow is that hundreds of defendants had already exceeded the maximum period of pretrial detention by law. And finally, those who already served their full sentences are being deprived of the right to be released, in a blatant disregard of the judiciary decisions.

Shawkan's ordeal is similar to many others languishing in Egyptian prisoners. Those arrested on politically-motivated charges in Egypt are subjected to numerous violations including arbitrary arrests, enforced disappearances, torture, prolonged pre-trial detention and solitary confinement.

On October 10, for the sixth year in a row, Shawkan celebrated his birthday in prison, when he turned 31. How many more birthdays will he have to celebrate behind bars?