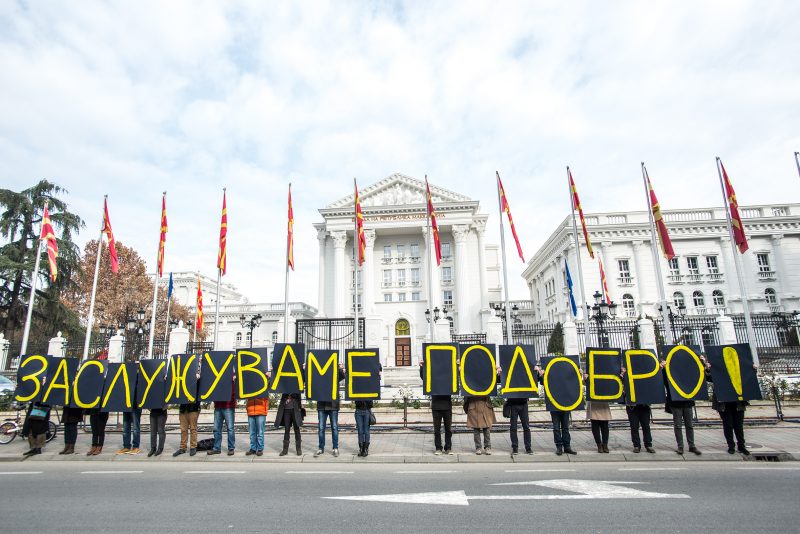 “We deserve better” a 2015 protest in front of the government of Republic of Macedonia. Photo by Vancho Dzambaski via Flickr (CC BY-NC-SA 2.0)

Chilimanov is a dogged promoter of Macedonia's former ruling party, the VMRO-DPMNE, which ran Macedonia from 1998 to 2002 and from 2006 to 2017. He was a political advisor to pro-Kremlin president Gjorge Ivanov during his first term starting in 2008. In 2017 he participated in the campaign for “de-Sorosization”, which targeted NGOs funded by the Hungarian-American billionaire George Soros.

The incident began when Hopkins, a correspondent for Financial Times Balkans, visited Macedonia to report on the recent referendum, in which Macedonians voted on whether the country should join NATO and the EU.

On Twitter, Hopkins summarized a frank conversation she had with a taxi driver who was against joining these intergovernmental bodies and expressed various frustrations about Macedonia's relationships with other countries in the region:

Skopje taxi boycotter: Bulgaria thinks our language doesn’t exist, Serbia refuses to recognize our Church, Greeks block our name, and we have probs w Albanians. We don’t have a problem, everybody else does. But why should we join a military alliance? I like EU but we got 0 chance

Many Macedonians re-tweeted Hopkins’ tweet, as it highlighted the inconsistencies of the “I Boycott” campaign, a proxy project of the formerly ruling VMRO-DPMNE party, which still holds seats in the current government.

Chilimanov responded to Hopkins’ tweet with the following veiled threat:

To all taxi drivers that follow me: If this one enters your car, it's Chichko Kumplung time!

Chilimanov was referring to the 1996 film Suicide Guide (originally named Self-destruction), in which a taxi driver called Chichko Kumpling (Uncle Clutch) takes a young woman to a remote spot and rapes her. The film was a box office flop, and is chiefly remembered for that graphic scene of forced sex [NSFW].

Jovica Mihajlovski, the actor who played Chichko Kumplug in the film, was one of the first to react to the abuse in a Facebook post:

I would like to remind this Cvetin person, who soils the character of Chichko Kumplung, that in the movie he ended up in a wheelchair precisely as punishment for the crimes that Chilimanov now advocates. I encourage him and all his adherents to share the fate of the Kumplung character and end in the same way. Another reminder, the taxi driver Kumplung is the main character of the film SELF-DESTRUCTION. Possibly he was inspired by the title, to fulfill his holy mission. Good luck from the Uncle!

Tweet threatening journalist Valerie Hopkins @VALERIEin140 by @Cvetin is shameful and unacceptable. All threats against journalists, especially gender-based incitements to violence against female journalists are irresponsible. @Cvetin must remove his tweet immediately. #SOFJO

Macedonian Foreign Minister Nikola Dimitrov publicly apologized on behalf of Macedonia and its men. The Association of Journalists of Macedonia and the Council of Media Ethics in Macedonia condemned the call to rape as a form of violence and also a breach of professional standards.

Responding to tweets by representatives of the international community, Chilimanov claimed he was only joking. At first he refused to remove the tweet, but several days later it was no longer available.

When MIA announced that they would suspend Chilimanov, many Macedonians applauded the move, seeing it as a sign of a new era, in which state workers are held accountable for their actions.

The self-proclaimed journalist who called for sexually assaulting @VALERIEin140 has been suspended from the Macedonian Informational Agency, where he works. https://t.co/RB6WplYFHK

Others recalled how when VMRO-DPMNE was in power, its supporters and henchmen — including Chilimanov — would call for violence against critics without any consequences:

Remember the black lists of Twitter users whose identity was supposed to be revealed so they can be harassed? Fascist Cvetin was a leader of that initiative. Now Twitter users are small potatoes, so he's moved to calling for the rape of a journalist colleague. But this time he stepped in quicksand. It will be fun to watch.

Indeed, this is not the first time Chilimanov has used social media to ‘joke’ about committing politically-motivated acts of violence against a journalist. In spring 2018, he wrote a Facebook post implying that it's OK to run over by a car the journalist and activist Petrit Saracini. In his comment Chilimanov wrote: “I hit the brakes when Petrit was crossing the street. My bad.”

A career in right-wing populist propaganda

Mr Chilimanov has served as one of the top propagandists of the VMRO-DPMNE since 2008. After his stint in the cabinet of the president, he was posted as the Macedonian Information Agency (MIA) correspondent in Washington, DC for several years.

In 2016 he was engaged in smear campaign against civil society groups that have spoken critically about the party, in particular through the Stop Operation Soros group which tried to foment discord between the administration of Donald Trump, the US State Department and the USAID through unregistered lobbying in the US.

After VMRO-DPMNE was voted out of power in 2017, Chilimanov retained his position in the MIA. Unlike when VMRO-DPMNE came to power, there were no purges based on political affiliations among the employees in state administration and government-owned companies.

MIA has not announced whether the suspension will lead to Chilimanov's firing. His case will be handled by an internal committee and the agency's director.