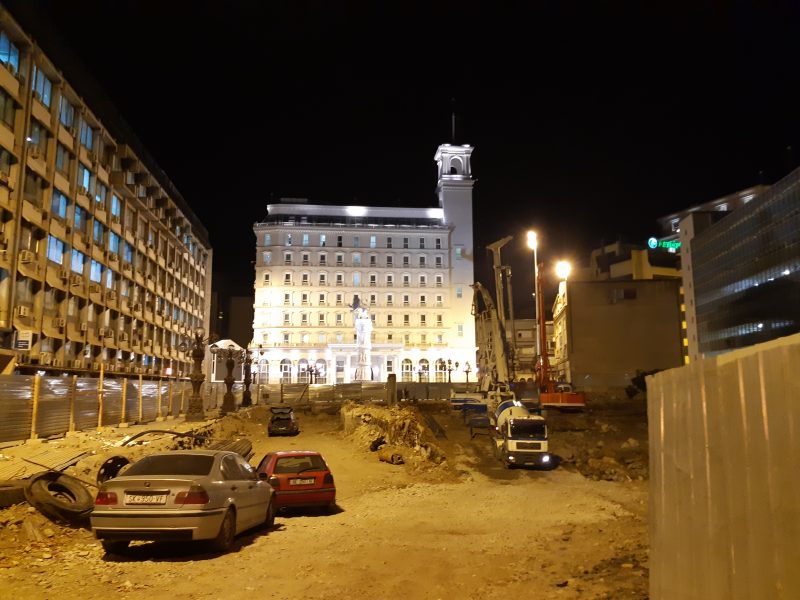 A former Macedonian government official revealed on November 28 that the right-wing populist party VMRO-DPMNE created a ‘system’ for spreading hate speech through organized mass trolling efforts. The VMRO-DPMNE  ruled the country from 2006 until 2017, when it was voted out of power.

VMRO-DPMNE became disgraced in 2015 when opposition politicians revealed that the party conducted massive wiretapping operations that placed tens of thousands of Macedonian government officials, political activists and journalists under unlawful surveillance for years at a time. VMRO-DPMNE is a member of the European People's Party, which received diplomatic support from Russia in their struggle to remain in power during this time. It is also a close ally of Hungary's ruling right-wing populist party Fidesz.

In an interview with national-level TV channel Kanal 5, Nikola Todorov, a former high-level official of VMRO-DPMNE, revealed that the party created and is still actively running online “troll farms”. Todorov held posts as the Minister of Education and Minister of Health, but was later expelled by party management over a tactical dispute.

Nikola Todorov comments on VMRO bots with 15-20 fake accounts which HAVE JOBS in their headquarters – this is how VMRO-DPMNE functions.

In the video, the former minister, who now works as a lawyer, explains that the party has established a system for incentivizing party members and agents to issue serious threats and use hate speech against people online. He implies that that system has been functioning for a long time.

Nikola Todorov: …Look here. It's those bots. Political party bots, whose job is to promote all those negative and destructive ideas of VMRO-DPMNE management, and to spread hate speech and falsehoods….This whole system for lynching via social networks that was built by VMRO-DPMNE is very dangerous at this moment. I would say… I'm afraid the people who work for that system would end up in jail for obeying the orders of VMRO-DPMNE management. And these are young people, in their twenties, who sit behind computers…

Journalist: Is this something new, related to this situation, or…

Todorov: No [it is not new]. This functions within VMRO-DPMNE and that has been the the way VMRO-DPMNE works. They give an order “tear to pieces Nikola Todorov on social networks.” And you know how that functions afterwards? There are about 20 people sitting behind computers, each with 10-15 fake profiles. And then they start with threats, insults, fabrications et cetera from those fake profiles. If there are about 20 with around 15 profiles each, they create the perception that an enormous number of people, say 200-300-400, think in that way. Which is not so.

If that system was built to create public perceptions for a political purpose, to gain some political points, I might understand. But this system works at a different level… Destructiveness within that system is at a maximum, using threats, defamation and spreading hate speech. Which is a forbidden [criminal] offence and very dangerous.

Todorov is right. Under the Macedonian Criminal Code, spreading forms of hate speech via computer systems is a criminal act, with penalties ranging between one to ten years in prison. Due to the corruption of law enforcement during the rule of VMRO-DPMNE, such crimes were not prosecuted, and perpetrators enjoyed full impunity.

Several Twitter users described their own encounters with members of the party system. Alongside paid trolls situated within communication centers at the party head quarters, it appears that low-level party members are also urged to create multiple profiles of their own and join the effort to spread these messages.

I can't reveal her name, but a friend of mine for undisclosed reasons became a member of VMRO-DPMNE. I remember 3-4 years ago she asked me to make 2-3 fake profiles on Facebook for her… I haven't refused anything to her, but I couldn't accept that. Still we still hang out regardless.

Over the years, party members and dependents were ordered to regularly visit certain Facebook pages and click likes and shares, or to add favorable comments to certain party posts.

Who has been paying for this party propaganda machine? The Macedonian taxpayers! Despite Macedonia's struggling economy and high unemployment rate, taxpayers supported a bloated state administration under the VMRO-DPMNE, which included jobs for party trolls, who were hired as civil servants or freelance contractors for government institutions.

In 2015, European Union facilitator Peter Vanhoutte revealed that the total amount paid in personal income taxes by the party in 2014 was about 3,200 euros — the equivalent to employment of one person.

According to my calculations, with this amount of money you can hire one person. So the biggest party in the country formally employs only one person? I see this as a problem and it may imply that the people working in the party are paid by the Government.

Citizens on Twitter corroborated these widespread perceptions with their own examples.

Not only they were making 2-3 profiles per each member, they also had an app that counted their likes and shares categorized by municipal party branch, in order to see who is most active. We have to admit that in return they got menial jobs in the state administration, for an average salary.

Populist VMRO-DPMNE has nurtured its troll army for several years, and they seem to have received a boost in foreign expertise during the most critical days of the political crisis. An investigative report by BuzzFeed News and the Organized Crime and Corruption Reporting Project (OCCRP) revealed that at least one member of Russia’s “troll factory”, Anna Bogacheva, charged by US special counsel Robert Mueller for allegedly interfering in the US 2016 elections, took a business trip to Macedonia in June 2015. This was soon after the VMRO-DPMNE appointed president of the country defied NATO solidarity with Ukraine, and paid homage to Vladimir Putin during Moscow Victory Day Parade.

Other right-wing populist parties in the Balkans are also known to have formed troll armies. In Serbia, members of the ruling Serbian Progressive Party (SNS) are known as SNS-bots by the critical public. Although these accounts are informally referred to as “bots”, they appear to be people running multiple accounts and behaving like robots.

Serbian newspaper Danas reported that at a session of SNS Executive Committee held on November 30 in Čačak, “a party official in charge of the internet team announced that SNS has 3,456 bots in charge of meticulous posting of comments on news portals, websites and FB pages.” The official further reported that these “bots” had written approximately 10 million comments over the past year.

After quotes from the interview started to appear on social networks, another former official from the same party, Ganka Cvetanova, reprimanded Todorov for not “respecting” party secrets. This led to further reactions by citizens who commented on her tweet:

According to a former minister of culture, integrity in politics is about keeping mum about the dirty tactics of your former party.

According to most people with integrity, keeping mum about dirty tactics is about omerta, the code of silence in the Mafia https://t.co/szAewVOr34