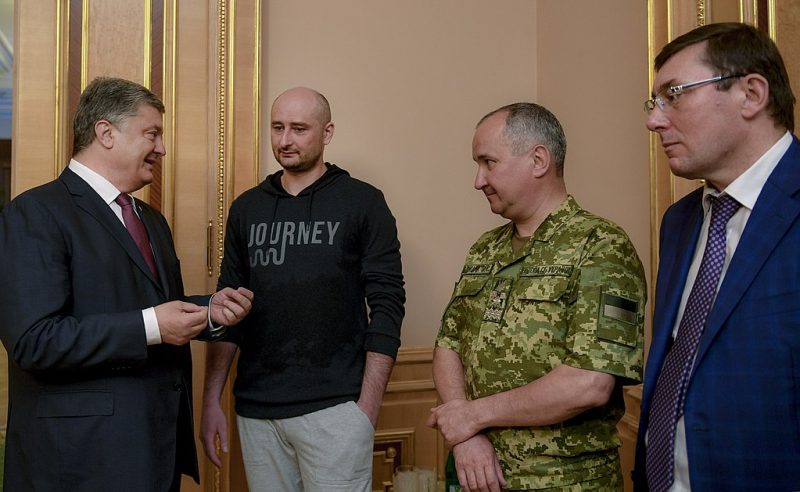 When Russian journalist Arkady Babchenko worked with Ukrainian authorities to fake his own assassination in May 2018, he became an international story and subject of criticism. This week, he was named a “Person of the Year” by TIME Magazine.

Rather than choosing one newsworthy individual, the US-based magazine chose to honor journalists around the world for their efforts during a particularly trying year. Dubbed “The Guardians and the War on Truth”, this selection included Jamal Khashoggi, the Saudi advisor-turned-journalist who was murdered in the Saudi embassy in Turkey, and the staff of the Capital Gazette newspaper in the United States, whose colleagues were killed in an attack at their offices earlier this year.

Also on the list were two Russians: one, Tatiana Felgengauer, almost died in a brutal knife attack. The other is Arkady Babchenko, who staged his own death in cooperation with Ukrainian authorities in May 2018, the hopes of exposing an alleged plot by Russian security services to assassinate Babchenko and 30 other Russian political emigres in Ukraine and other countries.

There is still no concrete evidence that the alleged assassination plot actually existed. And many international organizations, including OSCE and Reporters Without Borders, criticized the stunt as unjustifiable, irresponsible and damaging to public trust in the media in general.

Babchenko's inclusion TIME's list was also controversial because of who was not included. Many have pointed to the three Russian journalists who were murdered in July 2018 while on assignment in the Central African Republic.

Among the journalists in Time’s “Person of the Year” is Arkady freaking Babchenko, who spends most of the time complaining, talking shit on Facebook, and begging for beer money, but not Sasha Rastorguyev who was killed during an investigation into Russian weapon deliveries to the Central African Republic.

Rastorguyev and his colleagues Orkhan Dzhemal and Kirill Radchenko were investigating reports of Russian weapon shipments to the government of the Central African Republic, and the involvement of a Russian private military contractor in the country’s local armed conflict.

If TIME really wanted to honor journalists working in risky and even deadly conditions, this is a curious omission, to say the least. Including a person who faked his own death makes it even more conspicuous.

Hmm. Interesting move by @TIME to include Arkady Babchenko in #TIMEPOY as it relates to “war on truth.” Recall he's the journalist who faked his death in Ukraine with help from the country's controversial security service, which hasn't been completely truthful about the operation pic.twitter.com/eAqcvlfIoz

Simon Shuster, the TIME reporter who interviewed Babchenko for the feature, responded to the concerns of Babchenko’s colleagues, adding more nuance than 280 characters in a Tweet allow. He writes:

Among the central questions of that debate was this one: Exactly how inviolable is a journalist’s commitment to the truth? Should Babchenko have been willing – as he had already been so many times while reporting from war zones in Georgia and Ukraine – to sacrifice his life for it? Or was he justified in deceiving the public in order to save his own skin? In other words, as a reporter, was it his duty to find some other way to stay alive, one that would not have required him to produce a piece of fake news so sensational, and so believable, that it risked discrediting not only him but his entire profession?

He also further elaborated on the nature of “Person of the Year”:

Thanks Mark, but it’s not an award, it’s a recognition of impact. Have a look at the list of people who have been PoY over the years and that should be pretty clear.

In his own comments about the recognition, Babchenko did not seem to appreciate this distinction:

What’s the big deal? The whole world is laughing, it’s buffoonery, a setup by the SBU (note: Security Service of Ukraine, the country’s domestic intelligence agency), I violated ethical norms? And my absolute favorite: Babchenko’s not a journalist. Not a journalist, not a journalist. Calm down.
Thanks again to the Ukrainian feds for a job well done. This is your award too, guys. To be Person of the Year, beating out Donald Trump, who's in second place – done. I'm gonna go for a beer, as it were.

With this last line, Babchenko seems to be poking fun at himself. He has developed a reputation for soliciting donations for beer money at the end of many of his posts online, including the most vitriolic, something Shtein references in her Tweet above. This reflects his model of independent reporting: he posts content, and asks for money in exchange. He has even spearheaded a “Journalism Without Middlemen” project to formalize this arrangement.

Some also took issue with his inclusion because they allege Babchenko has not done any reporting for quite a while. While he is well-known for his reporting on the Chechen War and writing for Novaya Gazeta, the Russian newspaper holding the dubious record of having the most reporters assassinated while on the job, he has not written much for a few years. The only exceptions are his expletive-filled Facebook posts culminating in donation appeals, something that's been mocked even among many of his former colleagues and friends.

Whatever one’s view on Babchenko, for TIME to ignore the murder of three journalists while including a staged one undercuts their message of honoring reporters doing their jobs against all odds. Why couldn’t both be included?