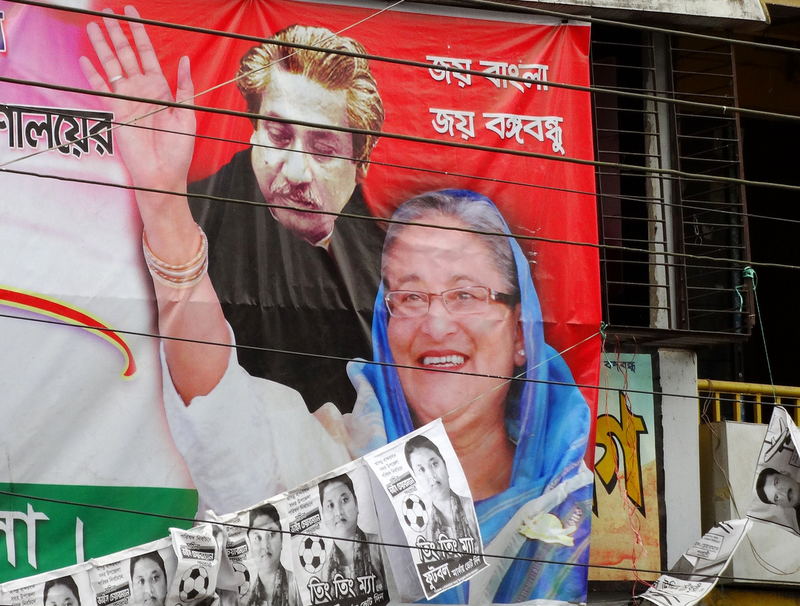 An election poster for PM Sheikh Hasina from 2014. Photo by Adam Jones via Flickr (CC BY-SA 2.0)

The Advox Netizen Report offers an international snapshot of challenges, victories, and emerging trends in internet rights around the world. This report covers news and events from December 4 – 21, 2018.

As they prepare for general elections on December 30, Bangladeshis are navigating soaring political tensions both on the streets and online.

Thousands of protesters and opposition party members have been arrested and many prosecuted in the lead-up to the elections, which could remove the right-leaning Awami League party from power.

Experts also have called into question the impartiality of the Election Commission which rejected the candidacy applications of 141 members of the leading opposition Bangladesh Nationalist Party (BNP). Most of these were approved on appeal,but their initial rejection sent a clear signal about the high cost of contesting the ruling party.

In a December 13 statement, Human Rights Watch Asia Director Brad Adams berated the Awami League for the crackdown and its effects on the democratic process. “The Awami League government has been systematically cracking down on independent and opposition voices to ensure that the ruling party faces no obstacles to total political control,” he said.

Political activity and news are also being targeted online. The official website of the BNP was was blocked last week, leaving voters unable to access critical information about the party’s candidates and platforms. After initially claiming ignorance about the reason behind the block, the Bangladesh Telecommunication Regulatory Commission (BTRC) claimed the website presented “distasteful” content that could harm law and order. The BTRC has the power to unilaterally block websites on national security grounds — it is not required to obtain court approval.

In tandem, five opposition candidates were sued under the controversial Digital Security Act, which took effect in September 2018. And on December 10, the BTRC temporarily blocked 58 websites on national security grounds, arguing that they contained “fake and baseless news reports.” Although the list of blocked websites (the Dhaka Tribune published a complete list) included some that were spreading disinformation likely intended to seed conflict, others are legitimate news and political commentary sites, or sites belonging to the BNP.

Social media companies are also removing some material from the web in an effort to reduce disinformation campaigns online in Bangladesh. Facebook reported on December 20 that it had taken down nine pages with nearly 12,000 followers, reasoning that they were exhibiting “coordinated inauthentic behavior” that the company says was linked to the Bangladeshi government. These included “BBC-Bangla”, an imitation of BBC Bengali and “BDSnews24”, an imitation of BDnews24, a legitimate local news site and former partner of Global Voices. Twitter’s Safety account also reported having suspended 15 accounts on similar grounds.

People are taking to the streets in multiple cities in Sudan, expressing outrage over rising costs of fuel and bread, and overall discontent with the ruling government. Demonstrations have turned violent and eight protesters have died in clashes with riot police. Technical tests by Net Blocks, a civil society group that coordinates technical analysis of internet censorship, indicate that multiple internet service providers were blocking Facebook, WhatsApp, Twitter and multiple local websites as of December 21.

A computer scientist at the University of British Columbia was summarily booted from Slack, the popular co-working platform, on December 19, on grounds that his usage of the platform violated US sanctions against Iran. Amir Abdi lives and works in Canada, but is originally from Iran, where Slack is unavailable due to US sanctions restricting the sale of US-made technology in the country. Several people with links to Iran have reported that their accounts had been deleted by Slack on the same grounds. Why did the platform suddenly decide to show him the door? Does this mean sanctions are now being applied on the basis of users’ nationalities, rather than jurisdiction? It’s too soon to say. Responding to press inquiries, a Slack spokesperson provided only boilerplate text concerning sanctions and offered no specifics

An in-depth report by The Mint found that at least 50 people in India have been arrested and jailed for their social media posts since the start of 2017. The business news site owned by HT Media (Hindustan Times’ parent company) interviewed multiple defendants and found that the majority of those arrested were Muslim, low-income and relatively new to using the internet. In most cases, they were booked for criticizing either the Prime Minister or the ruling party. Authorities have brought charges against the defendants under India’s IT Act and penal code sections that address sedition and obscenity.

Singaporean independent news and commentary site The Online Citizen (TOC) is facing a criminal defamation probe for publishing a letter accusing top government officials of corruption. The letter was written by Willy Sum, a government critic. On November 20, police raided the home of TOC editor-in-chief Terry Xu, confiscating computers and other equipment, and forcing the news website to declare a hiatus from publication. Xu was also interrogated by police for eight hours. TOC removed the allegedly defamatory letter as soon as it received a takedown notice from the Infocomm Media Development Authority (IMDA), an agency of the Singaporean government. TOC is back online, for now.

German officials received a letter from the Israeli government asking that it pressure two philanthropic organizations, Heinrich Böll Stiftung and Rosa Luxemburg Stiftung, to discontinue support for several Israeli human rights and civil society organizations, including the independent web magazine +972. Upon learning about the letter, a Heinrich Böll spokesperson told reporters, “[An attack on a] critical magazine like +972, which reflects Israel’s diversity of opinion, is also an attack on the well-known journalists of Israel.”

According to the German news site Die Tageszeitung, the letter specifically mentioned +972, arguing that its authors “regularly accuse Israel of apartheid.” +972, which is named after the telephone country code shared by Israel and Palestine, is an independent publication co-owned by a group of Israeli and Palestinian writers and received only 9% of its funding from the two foundations in 2018. The staff vowed to continue “conducting independent journalism determined to end the occupation and advance human rights and democratic values in Israel-Palestine.”

The family of Egyptian blogger and activist Alaa Abd El Fattah is getting ahead of the Egyptian justice system by advocating for his timely release from prison, scheduled for March 17, 2019. Alaa was arrested and jailed in November 2013. In February 2015, he was finally tried and convicted of “organising” an unauthorized protest, and sentenced to five years in prison. While he did take part in a protest against military trials for civilians on 26 November 2013, Alaa had no role in organising it.

Alaa’s March release date does not mark the end of Alaa's time served, but rather a transition to the final phase of his sentence. After his release, Alaa will be made to spend every night in his local police station for an additional five years.

CORRECTION [December 31, 2018]: A previous version of this report identified blocked website bdpolitico.com as being the blog of British journalist David Bergman. In fact, Bergman is the author of bangladeshpolitico.blogspot.com, a separate site. Although Bergman's site is blocked in the country on certain ISPs, it was not blocked in this particular episode.