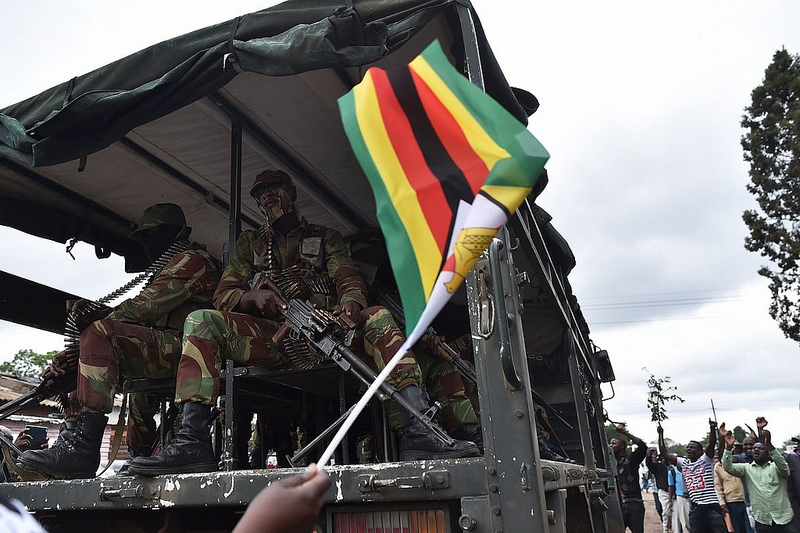 Soldiers at an anti-Mugabe demonstration in November 2017. Photo by Zimbabwean Eyes, licensed to public domain.

The Advox Netizen Report offers an international snapshot of challenges, victories, and emerging trends in Internet rights around the world. This report covers news and events from January 3 – 16.

When the long-standing economic crisis [2] in Zimbabwe reached a tipping point this week, social media sites went dark — and then, internet connections on two of the country’s largest providers went down altogether [3].

After officials announced a crippling 150 percent hike in fuel prices [4], trade unions and activists called for a three-day nationwide strike, urging Zimbabweans to refrain from going to work or school starting January 14. Military and security forces have used violent force against protesters and have detained at least 200 people [4], according to Al Jazeera. Several people have been killed and dozens were injured.

The economic crisis is the result of a massive shortage of foreign currency in the country. Zimbabwe has relied on foreign currency [5], mainly the US dollar, since 2009 when the government of Robert Mugabe stopped printing Zimbabwean dollars in an effort to quell hyperinflation.

This move has now come back to haunt the still relatively new government of Emmerson Mnangagwa, who only narrowly won the presidency [6] in August 2018.

Authorities may have ordered ISPs to restrict access, in response to the ongoing protests. As of January 16, the internet was not accessible on TelOne or EcoNet networks in and around the cities of Bulawayo and Harare, the nation’s capital. NetBlocks, a non-profit group that studies internet censorship, published results [7] of technical tests in the country showing the outages.

I am personally embarrassed for our government. Blocking information flow is a cowardly and pathetic thing to do. Zimbabwe is open for business but not open to information flow?

As they prepare for a nationwide referendum on a new version of the country’s constitution, Cuban activists have observed that SMS messages containing phrases like “yo voto no” (“I vote no”) or referencing abstention are not reaching their intended recipients. Independent media outlet 14ymedio tested multiple versions [8] of such messages with more than 100 people in various regions of the country, all of whom found the same results. The draft constitution [9] preserves Cuba’s one-party system, but legitimizes private business and sets term limits for the presidency, among other changes.

Wikipedia became inaccessible [10] for most Venezuelans on January 12, following a high-stakes conflict [11] over the legitimacy of two dueling political leaders, President Nicolás Maduro and the National Assembly President Juan Guaidó. After Guaidó publicly invoked a constitutional statute that could position him to assume the presidency until free and fair elections are held, Wikipedians went to war [12] over the question of who should be listed as president of the republic on the site [13]. Wikipedia became wholly inaccessible for several hours on CANTV, the country’s predominant internet service provider, which is majority-owned by the Venezuelan government. It is now accessible again. But the questions driving the controversy remain red-hot.

Two Myanmar reporters who were sentenced to seven years prison for violating Myanmar’s Official Secrets Act had their legal appeal of the verdict denied on January 11 by a Myanmar court.

Wa Lone and Kyaw Soe Oo were originally arrested in December 2017 [14] for possessing state documents [15] regarding military operations while covering the killing [16] of Rohingya in Rakhine state. They were sentenced on September 3, 2018, after a nine-month-long trial.

In court proceedings, police testified that they had handed the documents to the reporters without explanation, shortly before the arrest, effectively entrapping them.

The Southeast Asian Press Alliance [17] condemned the decision that rejected their appeal:

The denial of their appeal is an appalling reaffirmation of Myanmar’s rejection of genuine democracy and sends an unmistakable signal that press freedom is in great peril in a country, once a pariah state, that had held out hope that it was making great strides toward democratic reform.

Iranian internet regulators say they are prepared to block Instagram [18], one of the last and most popular foreign social media platforms still accessible in Iran, as Twitter and Facebook have both been blocked in the country for nearly a decade. Just this past year, Telegram messaging service [19] was blocked following large-scale protests [20] over economic hardships and broken promises of the ruling government. Although many Iranians likely will continue using to the service over VPNs, the move will mark another step for Iran in the direction of limiting online connections to services and communities in other parts of the world.

Using a VPN in China? Get ready to pay up.

Two Chinese internet users are currently facing fines [21] for using VPNs and similar tools to access overseas websites that are blocked by China’s Great Firewall. While VPN use is permitted in certain contexts — mainly for government agencies and large private companies — China's vigorous internet control regime has in recent years put significant resources towards preventing people from using these and other similar tools. The 2017 Cybersecurity Law [22] explicitly targeted VPNs, triggering multiple arrests of individuals selling unlicensed VPNs [23], and compelling Apple [24] to take down VPN apps from its China app store.

The new law does not explicitly address or criminalize the individual use of such technologies, but authorities used the 1996 “Rules for Provisional Regulations of the Administration of International Networking of Computer Information in the People’s Republic of China” [25] to fine the two users. Both cases indicate that, today, the very act of circumventing the internet through an unregistered channel is considered illegal.

Imprisoned Azerbaijani video blogger [26] Mehman Huseynov began a hunger strike [27] in protest of what he says is the latest in a series of bogus charges [28] levied against him by authorities in Azerbaijan. After 12 days without food or water, Huseynov began drinking water and milk [29], but continues to refuse solid and other foods. Other activists and supporters have joined the strike, including acclaimed journalist Khadija Ismayilova [30].

Prior to his arrest, Huseynov ran a popular Facebook page where he shared videos on social issues in Azerbaijan, ranging from poor working conditions to the lavish lifestyles of government officials. His page had more than 300,000 followers and is the subject of defamation charges filed against him by the government. He also faces new charges stemming from an encounter with a prison guard, that could result in additional prison time.