Surveillance is a key concern for foreign journalists working in China, survey shows

The original version of the following post was written by Jennifer Creery and published on Hong Kong Free Press on January 29, 2019. The republication is based on a partnership agreement.

Working conditions for foreign correspondents in China deteriorated in 2018, according to an annual report from the Foreign Correspondents’ Club of China (FCCC). Surveillance, both on the street and via communications networks, has become a dominant concern.

More than half of the respondents believed that government interference had worsened over the course of the year – the largest proportion since 2011, and a 10 percent increase from the year before. Not a single correspondent said conditions improved last year, the FCCC added.

Survey participants represent media from 31 countries and regions. Not all respondents answered every question. Additionally, bureau chiefs from nine international news-gathering organisations were interviewed extensively for the report.

Of the 27 respondents who visited Xinjiang – a northwestern region of China populated predominantly by Turkic Muslims – 24 said that they experienced “interference” while there. Xinjiang has seen a mass crackdown of ethnic minorities including the arbitrary detention of Uyghurs in extrajudicial “re-education” camps since President Xi Jinping implemented a hardline policy in 2014 to tackle social unrest.

The press club, which is not recognised by Beijing, added that surveillance and other forms of obstruction were prevalent in the region. Of the 204 respondents:

Nathan VanderKlippe, a correspondent for Globe and Mail, told the FCCC that he was subjected to intense surveillance while reporting on the region:

I was followed and tracked for nearly 1,600 kilometres, by at least 9 cars and 20 people – most of whom refused to identify themselves or their organisations…I was detained numerous times. A police officer seized my camera and deleted pictures without my consent.

The survey showed that Chinese authorities have refused to issue or renew visas for journalists, in what may be retaliation for negative news coverage. Megha Rajagopalan, former China bureau chief of Buzzfeed, was forced to leave the country last year after her application for a press visa was denied without explanation. Rajagopalan had covered Asia extensively since 2012, and her report on surveillance technology in Xinjiang won recognition at the 2018 Human Rights Press Awards.

Visas with shortened terms were also issued in apparent retaliation for coverage that upset the government. Voice of America (VOA) reporter Yibing Feng was given a six-month visa instead of the usual one-year term; a New York Times journalist was issued a three-month visa. Bill Ide, bureau chief for VOA, told the FCCC:

It’s harassment…They’re trying to send a message, but it’s unclear really what the message is, because we have asked them repeatedly to tell us specifically what led to the shortened visa and they have not given us any clarity.

About half of respondents attended interviews at the Ministry of Foreign Affairs prior to receiving their press credentials. One in 10 said they had problems during the renewal process.

Chinese employees of foreign media outlets also faced unique risks. 37 percent of respondents said that their local colleagues had been subjected to harassment and intimidation by authorities, including being forcibly separated and denounced as “traitors,” the report found.

In addition, the report raised concerns over the safety of sources within China, who are routinely subject to intimidation and harassment. According to the report, 34 percent of respondents said that sources had been harassed, detained or questioned by authorities at least once. 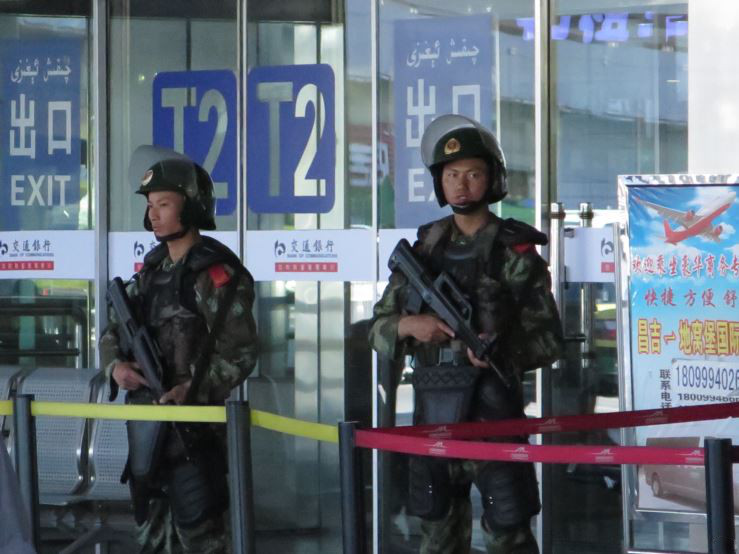 The report also noted areas of improvement. Fewer correspondents were called to Ministry of State Security meetings. There also were fewer reports of Chinese diplomats placing pressure on news organisations’ headquarters, and 84 percent of respondents said they had smooth visa processing procedures. On balance, the FCCC report concludes that the government has adopted a more nuanced approach to controlling foreign media.

Both physical and digital surveillance have became key concerns among foreign journalists. Alongside those who had been followed (48 percent of respondents), 22 percent were aware that authorities tracked them using public surveillance systems.

The FCCC report collected a number of cases showing how journalists and their sources were being watched. In an interview for the report, Matthew Carney from Australian Broadcasting Corporation said:

I have witnessed files been moved in my laptop, also in my phone I have actually seen them in my Gmail opening and closing files. This instance was at 2 a.m. in the morning. I had a very high level of surveillance in my home and office, on phone, all communications apps: Wechat, Gmail, ABC email, malware in my phone, etc.

Police officers told me they know about a social event I was organizing that I had privately invited friends to using Wechat.

FCCC president Hanna Sahlberg wrote that she is worried about the deteriorating press environment in China:

The wider monitoring and pressure on sources [to] stop journalists even before they can reach the news site…There is a risk that even foreign media will shy away from stories that are perceived as too troublesome, or costly, to tell in China.

She added that there were reports of Chinese officials offering to bug the homes of Hong Kong-based journalists on behalf of the Malaysian government, as media workers investigated a multi-billion dollar graft scandal in Kuala Lumpur that implicated now former Malaysian Prime Minister Najib Razak.

China ranked 176 out of 180 countries in the Reporters Without Borders’s 2018 World Press Freedom Index, making it one of the most restrictive countries in which foreign journalists work.