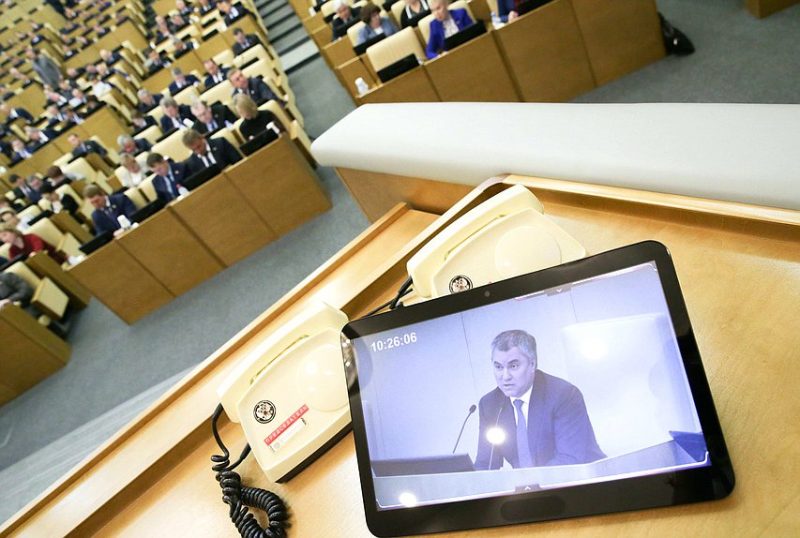 Despite heated debates, two controversial pro-censorship bills were approved by the Russian parliament // duma.gov.ru under CC4.0

One targets expressions of “willful disregard” towards the state. Another targets disinformation. All of them echo increasingly global concerns among governments about the political implications of disinformation — and unbridled criticism — on the internet. And all have been heavily criticized by Russian civil society groups, experts, users and even the government’s own ministers. Yet these bills promoting possible further crackdown on free speech still trudge on through the legislative system.

The first bill, a “sovereign internet” initiative, which is yet to reach the floor of the lower chamber of Russia’s bicameral parliament, seeks to establish state-regulated internet exchange points that would allow for increased monitoring and control over internet traffic moving into and out of the country.

One of the two bills co-authored by the controversial senator Andrey Klishas — who walked out of his own initiative’s committee hearing and refused to present it personally on the Duma’s floor — suggests new restrictions on “knowingly and maliciously disseminating false information of public importance.”

Under this law, individuals, officials or organizations accused of spreading fake news “disguised as genuine public announcements” which are found to promote public disorder or other serious disturbances could be fined for up to a million rubles (slightly above USD $15,000), unless they remove the violating content in a day’s time. The bill also provides measures through which Roskomnadzor, Russia's media watchdog, will order ISPs to block websites hosting the offending content.

The bill passed its first reading in late January with flying colours, receiving 336 votes in its favor and only 44 against, thanks to the 2016 landslide which guaranteed the ruling United Russia party an absolute voting majority.

The “anti-fake news” bill will be reviewed again by the Duma in February, conditioned on the revision of some of its most contentious points. The bill pushed through by “Putin’s party” was met with a rare response of significant opposition, even among the normally acquiescent branches of Russia’s highly centralized and executive-biased power structure. The attorney general’s office, among others, criticized the bill’s vague definitions as potentially damaging to citizens’ civil rights.

The second bill, which came up for review alongside the fake news-busting proposal, is seen as being even more controversial. It seeks to punish “vulgar expressions of wilful disregard” towards “the state, its symbols and organs of its power” with fines of up to 5,000 rubles (around USD $76) and detention for up to 15 days. The bill also passed in the first reading on the same day, despite vocal criticism from both government members (Deputy Communications Minister Alexey Volin said that “calmly accepting criticism” was an obligation for state officials, adding that they weren’t “made of sugar”) and opposition parties.

A video clip from the Duma’s floor made the rounds on social media with a Liberal Democratic Party of Russia member berating his colleagues for having thin skins:

A powerful speech in the Duma against the “disrespecting the authorities” bill: “If we stop calling a fool a fool, he won’t quit being a fool”

Many Russian journalists felt the bill was directly aimed at them. Sergey Smirnov, the editor-in-chief of Mediazona, an independent crowd-funded online news outlet focused on the abuses inside Russia’s justice system, wrote on his Telegram channel:

One of the bill’s authors Dmitry Vyatkin explained that criticism of individual officials wouldn’t be considered disrespectful towards the authorities under the new law. As for the fake news bill, he said the law could only be activated in cases where there was clear intent to endanger people’s lives or health or driving them to the streets en masse. Vyatkin also noted that the law wouldn’t affect journalistic investigations and reports.

Obviously, it will affect journalistic investigations and reports, there can be no doubt about that. That’s why they’re voting for this bill. On top of that, if Komsomolskaya Pravda or Lifenews [pro-Kremlin tabloids] publish fake news that lead to murders, no one will bear any responsibility. And when they want to put the pressure on the BBC, they’ll find ten different absurd reasons.

The BBC is currently being investigated by Roskomnadzor for supposedly violating Russian media laws — in a move that’s been openly described as a retaliation for a similar investigation of the Russian state-owned channel RT by officials in the UK.

Smirnov's quote also refers to of an infamous case where members of a murderous neo-Nazi gang were inspired by distorted or severely misreported news in the media to attack and kill ethnic minorities, human rights activists and journalists.

Both bills are noteworthy in the global context, as their authors each have explicitly invoked “anti-fake news” laws and proposals in Western countries as inspiration. Andrey Klishas, the senator who co-authored both, cited Germany as an example in both cases, especially the German “Network Enforcement Act” or NetzDG — a law targeting online hate speech that drew criticism from human rights groups for its heavy-handed approach and vague definitions.

Ironically, many of the recent “anti-fake news” bills and initiatives in Europe have been triggered by the fear of Russian disinformation. In recent years, repressive governments around the world, including Russia, Myanmar and Egypt, have used “fake news” as a pretext for clamping down on free speech.