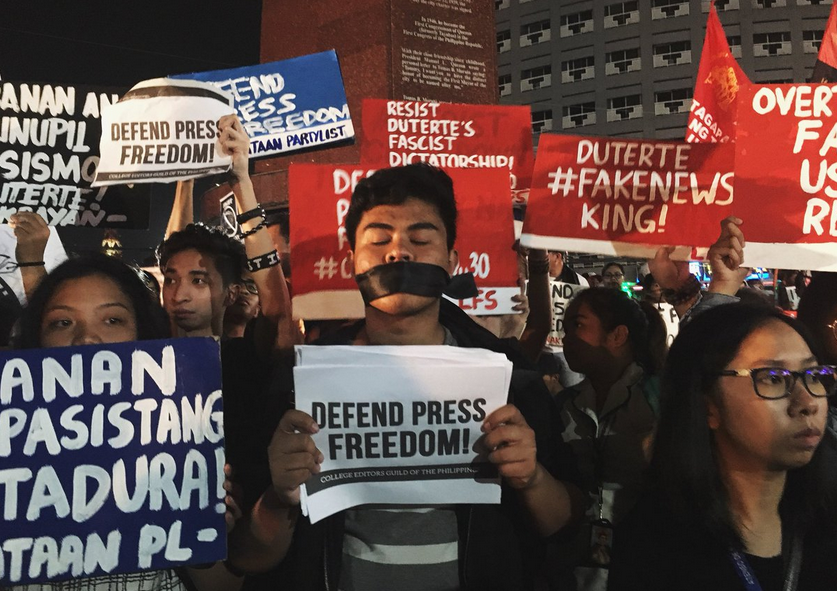 The Advox Netizen Report offers an international snapshot of challenges, victories, and emerging trends in technology and human rights around the world. This report covers news and events from February 1 – 7, 2019.

The Philippine Department of Justice filed charges of “cyber libel” [2] against independent news site Rappler, along with its executive editor, Maria Ressa, and former staffer Reynaldo Santos. The charges stemmed from a complaint from businessman Wilfredo D. Keng about a 2012 Rappler story that linked Keng to illegal drugs and human trafficking.

This marks the latest in a series of legal challenges [3] that Rappler has faced from the government and individuals associated with the political establishment over the past several months.

Rappler has aggressively covered extrajudicial drug killings in the Philippines and has been a frequent target of attacks by President Rodrigo Duterte, who has several times publicly accused Rappler of being a “fake news outlet” [4].

In January 2018, the Philippine Securities and Exchange Commission (SEC) revoked the business license [5] of Rappler on allegations [6] that the company was receiving illegal foreign funding and was owned by foreign entities. Rappler is 100% Filipino owned and has received foreign funding in full compliance with local law. Just two months ago, in December 2018, Rappler founder and editor-in-chief Maria Ressa was charged with tax fraud [7] and a warrant was issued for her arrest, but she was released after posting bail.

The National Union of Journalists of the Philippines [7] said the attempted arrest of Ressa signaled that the Duterte administration “will go to ridiculous lengths to muzzle all those it does not agree with.”

With general elections approaching in Indonesia — polls are scheduled for April 19 — social media companies are on high alert for coordinated disinformation campaigns. On January 31, Facebook announced [8] that it removed hundreds of profiles, groups, and Instagram accounts linked to the Indonesian media syndicate Saracen Group [9], which is known for propagating hate speech and media hoaxes. The group has been the source of multiple large-scale online disinformation campaigns and memes supporting certain politicians and contenders for legislative office. Facebook explained that the Saracen Group has been banned from its services for engaging in “coordinated inauthentic behavior,” [10] a violation of Facebook’s policies.

Saracen’s operations made headlines in 2017, causing [11] with President Joko Widodo to launch a police crackdown on Saracen and other similar groups. Three leaders of the group have faced criminal charges [12], and two have been convicted under Indonesia’s IT law. One is now facing 10 months in prison, while the other will spend two years behind bars.

A newly proposed law in the Duma, the lower house of Russia’s legislative branch of government, would punish people and web services [13] that “knowingly and maliciously disseminate false information of public importance.”

Under the law, entities accused of spreading disinformation that is found to promote public disorder or other serious disturbances could be fined up to a million rubles (just over USD $15,000), unless they remove the violating content in a day’s time. The bill also proposes measures [14] through which Roskomnadzor, Russia's media watchdog, would order ISPs to block websites hosting the offending content.

Although it passed its first reading with flying colors, the bill was met with a rare response of opposition from some prominent voices, including the attorney general’s office, which criticized the bill’s vague definitions as potentially damaging to citizens’ civil rights.

A Kazakh woman who was accused of calling for the government’s overthrow on a Telegram chat channel was acquitted by a judge [15] in the Kazakh city of Aktau, in a verdict that surprised many. Such acquittals are rare in Kazakhstan, where the judiciary lacks independence, especially in cases that are highly politicized.

The verdict in the state’s case against Aigul Akberdi came months after her husband was jailed for three years [16] on similar grounds, after he was convicted of inciting social hatred with anti-government posts in the same Telegram chat channel where Akberdi posted. The two cases are emblematic of the government’s assault on critics and the widespread use of messenger apps by opposition groups, including those based outside the country.

Saudi Arabia is not seeking the death penalty against Shia activist Israa al-Ghomgham, the Kingdom’s embassy in London told [17] Newsweek on January 31. Multiple human rights groups previously reported [18] that the Saudi prosecutor was seeking the death penalty against al-Ghomgham, along with four other detainees including her husband over their roles in anti-government protests in Al-Qatif back in 2011.

Al-Ghomgham faces eight charges including “preparing, sending and storing material that would harm the public order” under Article 6 of the Cybercrime Act of 2007. She also stands accused of “inciting rallies and young people against the state and security forces on social networking sites”, and posting photos and video of these protests online. Her husband and three other protesters are reportedly [19] still facing the death penalty.

Underwater accident cuts off the internet for all of Tonga

The internet was completely shut down [20] in the Pacific island nation of Tonga from January 20 until February 2, due to unexplained damage to the country’s sole undersea internet cable. Officials suspect the cable was destroyed by a large boat anchor, but after surveying the damage to the cable, operators acknowledged that it may have been an act of sabotage [21].

In an interview with the Associated Press, a representative from Tonga Cable Ltd. said it was “beyond anyone's imagination” why someone would want to damage the cable, and that an investigation was underway.

Fear has spread across Nigeria that the government may switch off [22] the internet during the presidential elections set to take place on February 16. On January 26 and 27, Quartz reported that their guide to staying online [23] in an internet shutdown was the most popular piece on their site, due entirely to traffic from Nigeria.

On February 2, the Office of the National Security Advisor issued a press statement [24] that sought to dispel these rumors, emphasizing that “‘shutting down’ the internet is akin to shutting down national development and security” and pledging to ensure that Nigerians may “freely exercise their civic rights.” Time will tell if authorities will keep their word.

In Japan, big brother is hacking you — for your own good

Japanese officials have orchestrated a massive test of the vulnerability [25] of internet-enabled devices such as routers, web cameras and “internet of things” (IoT) products. Technical workers at the National Institute of Information and Communications Technology will use standard hacking techniques to attempt to compromise the devices of more than 200 million devices, in an effort to assess the overall level of cybersecurity in the country, in preparation for the 2020 Olympics in Tokyo.