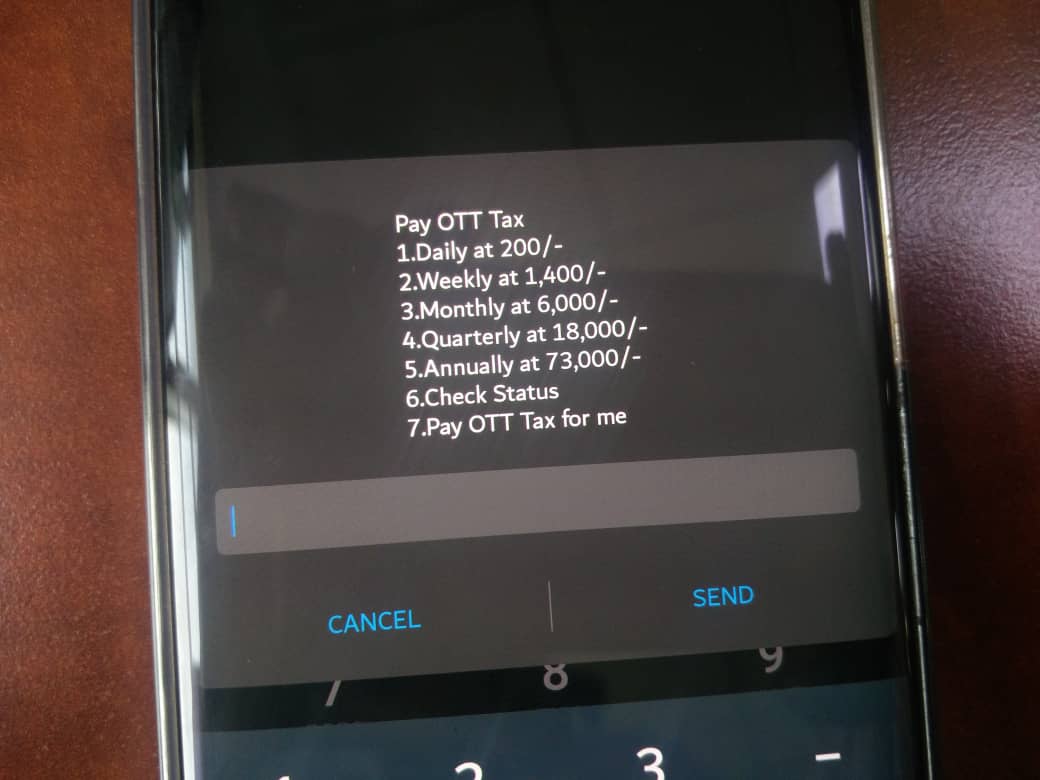 Users need to pay a tax to use Social Media. The USSD menu appears showing the different validity periods and prices. Photo by James Propa.

The number of people using the internet in Uganda has dropped by more than 12 percentage points since July 2018, when the country's so-called “social media tax” was put into force.

Prior to the tax's implementation, 47.4% of people in Uganda were using the internet. Three months after the tax was put in place, that number had fallen to 35%.

The tax resulted from an Excise Duty Bill passed in parliament in May 2018, which allows Uganda Revenue Authority (URA) to tax users’ access to IP-based over-the-top (OTT) communication services, including all major social media services. In practice, the rule has forced people to pay 200UGX or roughly USD $0.054 per day for social media access.

President Yoweri Museveni and several government officials said this was an opportunity to curb online rumor-mongering and generate more revenue for the East African nation.

But for many, this is a violation of freedom of speech and a form of double taxation, as citizens already pay a tax on data bundles to access the internet. Opposition members of parliament, journalists, activists and the general public argued that the tax would lock thousands of people out of online services — especially youth, who make up more than 70 percent of the population.

The tax was the subject of large-scale public protests in July and August 2018. During one protest against the tax, key opposition leader, activist and musician Bobi Wine said that the tax was enforced to oppress the young generation.

Global Voices also took part in advocating against the tax by holding a tweetathon for Ugandans and supporters across the region to speak out and raise awareness.

The government expected to collect about UGX 24 billion in revenue from the tax every quarter. But in the first quarter after the tax's implementation, they collected UGX 20 billion. In the second quarter, ending December 2018, they had collected only UGX 16 billion.

A tweet from Uganda Communications Commission showed the trend of declining OTT tax revenues and internet use between July and September 2018.

In the last three months of the Qtr under review, both the number of OTT taxpayers & figures for OTT revenues declined. Figures indicate subscribers using OTT services at least once in the quarter. 50.4% of the internet subscribers used OTT services by the end of September 2018. pic.twitter.com/aM7hBfage8

While some people have gone offline altogether, others are simply finding different and more affordable ways to connect. People are creating shared access points where one device pays the tax and tethers the rest as a WiFi hotspot, or relying on workplace and public area WiFi networks to access the services.

Other Ugandans are using Virtual Private Network (VPN) applications to bypass the tax. In a statement for The Daily Monitor, the Uganda Revenue Authority's Ian Rumanyika argued that people could not use the VPNs forever, but that doesn't seem to be the case.

One of the reasons (OTT) has not been performing well is resistance. We experienced a lot of resistance in the first quarter thus failing on our targets….It is catching up, because they [subscribers] cannot use VPNs forever.

Ugandan tech blog Tech Jaja predicted that VPN use may become the norm for social media users, who may choose to put their money towards additional data bundles and rely on VPNs, where basic services are typically free of charge.

[Many] internet users…see UGX 200 as another 10MB package to stay connected on the internet. Hence, its [sic] no surprise that VPNs will continue becoming the country’s main gateways to taxed platforms…

Under the same law, the government introduced a mobile money tax that imposes a levy of 0.5 percent on cash withdrawals. This also provoked a response, a many Ugandans use mobile money banking and money transfers as a quicker, easier and safer way to save and transfer funds.

Uganda Debt Network tweeted that the mobile money tax has achieved a surplus of its targets whereas the OTT tax has not met its targets.

Mobile money tax registers surplus as OTT fails to reach target in the first quarter. @URAuganda collected Shs104.75b from Mobile Money tax in excess of Shs50b of the Shs54.75b set target while OTT generated only Shs21.12b in the same period against Sh135.21b.@SEATINIUGANDA

In addition to leaving Ugandans with less access to communication and diminished abilities to express themselves online, it has also affected economic and commercial sectors, where mobile money and online marketing are essential components of daily business.

Juliet Nanfuka of the Collaboration on International ICT Policy in East and Southern Africa (CIPESA) revived the call for a reassessment of the policy, citing stakeholders who have asked for “a more inclusive financial economy and digital society that does not discriminate or disenfranchise already marginalised and vulnerable communities.” Time will tell whether these arguments take hold among government decision-makers.