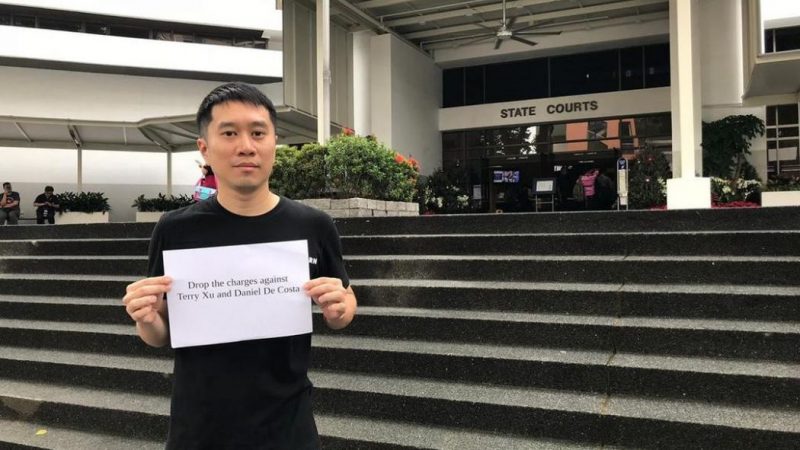 The following post is originally written by Holmes Chan and published on Hong Kong Free Press on 21 of Feburary, 2019. The edited version is republished on Global Voices under a content partnership agreement.

Singaporean activist Jolovan Wham has been handed a 16-day jail sentence for refusing to pay a fine for a public talk he hosted with Hong Kong democracy activist Joshua Wong via Skype in 2016. He is out on bail pending appeal.

Wham is an activist known for his campaigns promoting the rights of migrant workers, free speech in Singapore, and reform of the country’s laws on detention and the death penalty.

Last month, Wham was convicted of illegal assembly over a November 2016 forum he hosted on the topic of “civil disobedience and social movements,” which featured Joshua Wong and local media activists. Wham was told by police that he needed a permit for Wong to speak, but he went ahead without one.

Singaporean media reported that Wham chose not to pay the fine, and that the court sentenced him to 16 days in prison for failure to pay the fine. Aside from illegal assembly, Wham was also charged for refusing to sign his police witness statement. He said at the time that he chose not to sign because he was not given a copy.

The forum in question was organised by Community Action Network, a non-governmental group concerned with freedom of expression in the city-state. According to Wham, the police told him it was compulsory to get a work permit and police permit if any of the participating speakers were not from Singapore – even if they spoke remotely via video link.

After the event, Wham was questioned by police for 45 minutes. He was finally charged in November 2017, but the case did not come before a judge until January 2019.

Joshua Wong told HKFP that Wham’s prosecution was “an embarrassment and a terrible injustice,” and that he deeply regretted the judgment.

Jolovan generously invited me to share and exchange my experience in Hong Kong’s fight for freedom and justice with the Singaporean community – the irony is not missed here that Jolovan has become a subject of injustice as a result.

I’d like to express my respect and admiration for Jolovan’s perseverance of his values, and my wish for the Singaporean people to one day be able to enjoy true freedom and democracy.

‘Stretching of the law’

Singaporean journalist and Global Voices collaborator Kirsten Han, who was also a guest speaker at Wham’s forum, decried the sentence as “outrageous.”

[The forum] posed no threat to public order whatsoever, and the stretching of the law to declare a forum illegal simply because a non-Singaporean Skyped in shows how broad Singapore’s public order laws are, and how they can be used to restrict Singaporean’s civil liberties…There’s no sentence that I’d consider fair, because he should never have been charged.

Han also disputed the prosecution’s account of events. According to Channel NewsAsia, the prosecution argued in court that “thousands” were invited to the forum and 366 people indicated they were interested in attending.

However, Han said the event only had slightly more than 60 attendees and was “pretty standard.” “The venue wasn’t that big anyway,” she added.